Hello and welcome back for day 4 of Frogtober! Today's Inktober theme is "spell," so today's monster has spells in abundance. The arcanaruna, wonderfully illustrated below by Hugo Solis (https://deviantart.com/butterfrog), doesn't think it has enough magic, though, so it steals and absorbs what it can, usually from PCs it encounters. It also has a younger version that isn't quite so readily malevolent, but it eventually grow into it. Thanks to a discussion with Landon Bellavia, one of my Patreon (obligatory link: https://www.patreon.com/FrightfulFridays) patrons, I realized the juvenile arcanaruna needed to be neutral rather than the neutral evil of its parent.

I hope you enjoy the arcanaruna, and I'll see you tomorrow with a pretty fun froggy monster! 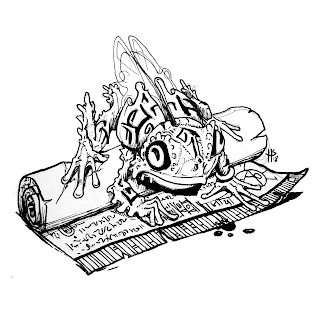 
Multiple glyphs of varying shapes cover this gray frog’s skin. Several of them glow with a torch-like intensity.
Arcanaruna      CR 15
XP 51,200
NE Small aberration
Init +9; Senses arcane sight, darkvision 60 ft.; Perception +26
DEFENSE
AC 30, touch 22, flat-footed 25 (+4 armor, +6 deflection, +5 Dex, +4 natural, +1 size)
hp 210 (20d8+120)
Fort +14, Ref +13, Will +17
Defensive Abilities absorb magic, adaptable energy resistance; DR 10/magic; Resist acid 20, cold 20, electricity 20, fire 20, sonic 10; SR 26
OFFENSE
Speed 30 ft., fly 60 ft. (perfect)
Melee tongue +21 touch (magic siphon)
Space 5 ft.; Reach 5 ft. (15 ft. with tongue)
Sorcerer Spells Known (CL 20th; concentration +26)
9th (6/day)—dominate monster (DC 25), meteor swarm (DC 25), weird (DC 25)
8th (6/day)—incendiary cloud (DC 24), polar ray, stormbolts[APG] (DC 24)
7th (6/day)—delayed blast fireball (DC 23), greater teleport, insanity (DC 23)
6th (7/day)—disintegrate (DC 22), freezing sphere (DC 22) , greater dispel magic
5th (7/day)—baleful polymorph (DC 21), cone of cold (DC 21), hold monster (DC 21), suffocation[APG] (DC 21)
4th (7/day)—bestow curse (DC 20), black tentacles, enervation, stoneskin
3rd (7/day)—dispel magic, displacement, fireball (DC 19), slow (DC 19)
2nd (8/day)—blur, false life, ghoul touch (DC 18), glitterdust (DC 18), mirror image
1st (8/day)—mage armor, magic missile, ray of enfeeblement (DC 17), shield, shocking grasp
0 (at will)—arcane mark, dancing lights, daze (DC 16), detect magic, ghost sound (DC 16), mage hand, message, open/close (DC 16), read magic
STATISTICS
Str 6, Dex 21, Con 23, Int 18, Wis 16, Cha 23
Base Atk +15; CMB +12; CMD 33 (37 vs. trip)
Feats Combat Casting, Eschew Materials, Great Fortitude, Improved Initiative, Iron Will, Lightning Reflexes, Magical Aptitude, Quicken Spell, Silent Spell, Weapon Finesse
Skills Appraise +24, Bluff +26, Fly +23, Knowledge (arcana) +27, Knowledge (planes) +19, Perception +26, Sense Motive +23, Spellcraft +31, Use Magic Device +30
Languages Abyssal, Aklo, Aquan, Auran, Celestial, Draconic, Ignan, Infernal, Terran
Special Qualities arcane formation
ECOLOGY
Environment any
Organization solitary
Treasure double (ioun stones)
SPECIAL ABILITIES
Absorb Magic (Su) When a spell or spell-like ability fails to overcome an arcanaruna’s spell resistance, it is absorbed by the arcanaruna. If the spell or spell-like ability affected an area, it completely fails to function, but a spell or spell-like ability with multiple targets work on the other targets. The arcanaruna heals a number of hit points equal to twice the spell’s level. Additionally, the arcanaruna can choose one of the following options: increase its deflection bonus to Armor Class by a value equal to 1/4 the spell level (minimum 1), add the spell to its spells known, or add the spell level to a spell point pool (for its arcane formation ability). The deflection bonus and the spell point pool last for 1 hour, while the additional spells known last for 24 hours.
Adaptable Energy Resistance (Su) As a free action at the beginning of its turn, an arcanaruna can lower one energy resistance by 10 to increase another energy resistance by 10 or give itself immunity to the chosen energy type if the energy resistance is at 30. Alternatively, it can reduce an immunity to an energy type to resist 30, so it can increase another energy resistance by 10 (or change it into an immunity as above).
Arcane Formation (Su) As a standard action, an arcanaruna can use its spell point pool to create an ioun stone or create a sigil that acts as a symbol or glyph spell. It must expend spell points equal to the price of the ioun stone divided by 1,000, or the level of the spell. Stones created by the arcanaruna only last for 1 hour if the it remains alive. However, if the arcanaruna is killed, any stones it created become permanent. Sigils have a duration per the spells they duplicate.
Magic Siphon (Su) If an arcanaruna succeeds on a touch attack with its tongue against a target, it can choose an item in the target’s possession to suppress its magic for 1d4 rounds. The arcanaruna must be aware of the item (typically through the use of arcane sight) to choose an item. The target must succeed on a DC 23 Will save to avoid this effect. If the target fails, the arcanaruna increases its spell point pool by a value equal to 1/2 the item’s caster level. The save DC is Wisdom-based.

This gray frog is no larger than a cat. It has a dimly-glowing rune on each flank. The gleam of intellect in its eyes betrays its seemingly animal nature.
Juvenile Arcanaruna      CR 2
XP 600
N Tiny aberration
Init +6; Senses darkvision 60 ft., detect magic; Perception +7
DEFENSE
AC 16, touch 14, flat-footed 14 (+2 Dex, +2 natural, +2 size)
hp 19 (3d8+6)
Fort +3, Ref +3, Will +4
Defensive Abilities adaptable energy resistance; Resist acid 5, fire 5; SR 13
OFFENSE
Speed 20 ft., fly 40 ft. (average)
Melee tongue +6 touch (magic suppression)
Space 2–1/2 ft.; Reach 0 ft. (5 ft. with tongue)
STATISTICS
Str 2, Dex 14, Con 15, Int 14, Wis 13, Cha 17
Base Atk +2; CMB +2; CMD 8 (12 vs. trip)
Feats Improved Initiative, Weapon Finesse
Skills Appraise +5, Fly +12, Knowledge (arcana) +8, Perception +7, Spellcraft +8, Use Magic Device +6
Languages Aklo, Draconic
ECOLOGY
Environment any
Organization solitary
Treasure none
SPECIAL ABILITIES
Adaptable Energy Resistance (Su) As a free action at the beginning of its turn, a juvenile arcanaruna can lower one energy resistance by 5 to increase another energy resistance by 5. It cannot have an energy resistance better than 10 using this ability.
Magic Suppression (Su) If a juvenile arcanaruna succeeds on a touch attack with its tongue against a target, it can choose an item in the target’s possession to suppress its magic for 1 rounds. The arcanaruna must be aware of the item (typically through the use of detect magic and concentration for 3 rounds) to choose an item. The target must succeed on a DC 12 Will save to avoid this effect. The save DC is Wisdom-based.

Arcanarunas come from a now-dead world somewhere in the dark corner of the universe. Given their predilection for absorbing magic wherever they travel, it is likely this odd species with a similar appearance to frogs caused the catastrophe that destroyed their world. Those who have managed to study the creatures and keep their magic intact trace their path through the Material Plane and other dimensions to other dead or dying worlds.

Arcanarunas claim their sole motivation is to catalogue all the world’s arcane magic. If they have to rip it from selfish beings who hoard their knowledge and power to themselves, so be it. They usually attempt a more benign approach when encountering an arcane caster, presenting themselves as students and practitioners of the art. If that doesn’t work, they goad spellcasters into casting spells on them, so they can absorb and study the spells. If arcanarunas join a fray with a mixture of arcane spellcasters and non-spellcasters, they target the non-arcane spellcasters for destruction while leaving the spellcasters intact. After all, they don’t want to destroy their meal tickets.

Arcanarunas live for 800 years. They produce offspring at a slow rate, and often send the innocuous-looking spawn to hunt for arcane spellcasters to whom they can attach themselves as familiars. While the contract between “master” and familiar precludes these juvenile arcanarunas from directly killing the spellcasters they serve, they often arrange for assassinations when they feel they are ready to reach adulthood.

A spellcaster of at least 7th level who has the Improved Familiar feat may select the juvenile arcanaruna as a familiar. The arcanaruna bestows its energy resistances and spell resistance to the spellcaster when they are adjacent to each other.