Hello again! It's time for another frog, illustrated again by the incomparable Hugo Solis (https://www.deviantart.com/butterfrog). Today's frog is kinda similar to yesterday's, in that it just wants everyone to chill. However, the lotus blossom frog can prove inadvertently lethal to those it encounters. It doesn't care if there are monsters roaming about, as long as it can bring peace to as many as possible. So, it will just float and watch serenely as a critter tears up a PC who can't quite escape the enforced tranquility.

I hope you enjoy the lotus blossom frog. I'll be back tomorrow with a monster with considerably less chill! 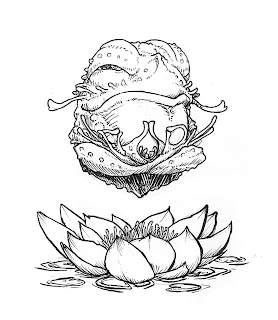 This frog the size of a bulldog floats gently above the ground and sits in a meditative pose. Waves of calm, soothing energy flow from the frog.
Lotus Blossom Frog      CR 7
XP 3,200
NG Small fey
Init +4; Senses low-light vision; Perception +17
DEFENSE
AC 20, touch 16, flat-footed 15 (+4 Dex, +1 dodge, +4 natural, +1 size)
hp 85 (10d6+50); regeneration 10 (lethal damage)
Fort +8, Ref +11, Will +11
Defensive Abilities overcome the physical
OFFENSE
Speed 10 ft., fly 60 ft. (good)
Melee tongue +10 touch (Touch of Serenity)
Special Attacks harmonious croak
Spell-Like Abilities (CL 10th; concentration +12)
Constant—mantle of calm[ACG] (DC 16)
At will—calm animals (DC 14), calm emotions (DC 15)
1/day—lily pad stride[APG], serenity[UM] (DC 17)
STATISTICS
Str 7, Dex 18, Con 20, Int 12, Wis 19, Cha 15
Base Atk +5; CMB +2; CMD 17 (21 vs. trip)
Feats Dodge, Peacemaker, Skill Focus (Diplomacy), Spell Focus (enchantment), Touch Of Serenity[APG], Weapon Finesse
Skills Acrobatics +17, Diplomacy +21, Escape Artist +17, Fly +23, Perception +17, Sense Motive +17, Sleight of Hand +17
Languages Common, Sylvan
ECOLOGY
Environment any forest
Organization solitary or harmonious joy (2–12)
Treasure all the world’s many offerings are treasure enough
SPECIAL ABILITIES
Harmonious Croak (Su) Three or more lotus blossom frogs can spend a full-round action to create the effects of the euphoric tranquility spell. For every 3 frogs in the group, the spell’s caster level and Will save DC increase by 1. The effect lasts while at least one of the originating frogs maintains it, but originating frogs can switch in and out. This is a sonic effect.
Overcome the Physical (Su) A lotus blossom frog can attempt a Will save when it takes lethal damage from a weapon, spell, or effect. The save DC is equal to the weapon damage or the DC of the spell or effect. On a successful save, the damage becomes nonlethal.
Touch of Serenity A lotus blossom frog can use this feat 10 times per day, and its effects last for 2 rounds.

Lotus blossom frogs derive from a species of frog living at the border of the primal dimension populated by fey creatures. The frogs lived in a region contested by fey factions and many frogs died as collateral damage in the fey’s internecine battles. As the frogs absorbed more primal energy, they grew larger and their mental prowess improved immensely.

Rather than turn generations of deaths into a focus for revenge, lotus blossom frogs embrace peace, so much so that they are willing to calm one side of a conflict and let that side get slaughtered by the opposing side. The frogs’ alien reasoning is that the dead went in peace, so they will know only peace in whatever awaits them on the other side of the pond. Lotus blossom frogs are pleased when peace blooms on its own without their interference, but they are unaware that most communities plagued by the frogs put on a friendly façade to trick them. Groups of frogs in troubled areas gather together to force tranquility on others to induce a long-lasting peace, wherein the recipients starve to death because they are not motivated to feed themselves.

A lotus blossom frog is 2 feet long, stands 1–1/2 feet tall, and weighs 30 pounds. The frogs are long-lived and usually reach the extent of their 500-year lifespans.