Hello and welcome to Frogtober, a month-long anniversary celebration for Frightful Fridays! I'm partnering with Hugo Solis (https://www.deviantart.com/butterfrog), who is participating in the conveniently-timed Inktober. So, you'll be getting illustrations all month to go with the frog-themed monsters. Today's Inktober theme was poison, so I ran with the trope of a frog with psychoactive resin on its skin. An encounter psychotropifrog may open a character's mind up to something you never considered before, or it may permanently mess that character up. It'll be fun, either way.

I hope you enjoy the psychotropifrog, and I'll see you tomorrow with another frog monster! 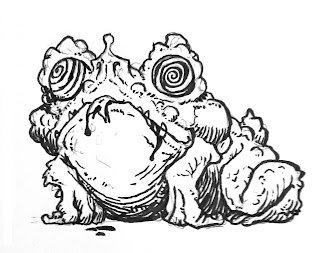 
This massive frog has pupils that look like spirals, and its skin bears strange blotches that look like puffy clouds.
Psychotropifrog      CR 3
XP 800
CN Small magical beast
Init +2; Senses darkvision 60 ft., low-light vision; Perception +1
DEFENSE
AC 15, touch 13, flat-footed 13 (+2 Dex, +2 natural, +1 size)
hp 30 (4d10+8)
Fort +6, Ref +6, Will +2
Defensive Abilities toxic skin; Immune mind-affecting effects, poison
OFFENSE
Speed 20 ft., fly 40 ft. (poor), swim 30 ft.
Melee bite +7 (1d6–1 plus grab and psychotropifrog toxin)
STATISTICS
Str 9, Dex 15, Con 15, Int 4, Wis 12, Cha 13
Base Atk +4; CMB +2 (+6 grapple); CMD 14 (can't be tripped)
Feats Go Unnoticed[APG], Weapon Finesse
Skills Acrobatics +6, Fly +4, Stealth +10, Swim +11
Languages telepathy 60 ft.
ECOLOGY
Environment any forest
Organization solitary, pair, commune (3–12)
Treasure incidental
SPECIAL ABILITIES
Psychotropifrog Toxin (Ex) Contact or Bite—Injury; save Fort DC 14; frequency 1/round for 8 rounds; effect 1d4 Wis; cure 2 consecutive saves. A victim of this poison must succeed on a DC 14 Will save at the beginning of its turn or become confused. On a roll of 51–75, the victim falls prone (if not already prone, it takes 1d6 points of nonlethal damage) and laughs for 1 round, and on a roll of 76–100, the victim is stunned by a realization or an answer to a question relevant to the victim or its compatriots. Additionally, a creature that still suffers Wisdom damage from psychotropifrog toxin after 24 hours must succeed on a DC 14 Fortitude save or 1 point of Wisdom damage becomes 1 point of Wisdom drain. The save DCs are Constitution-based.
Telepathy (Su) A psychotropifrog can only communicate with those victims suffering from its poison. It can continue communicating with them for 1 minute after they stop being affected by the poison.
Toxic Skin (Ex) A psychotropifrog's skin secretes its poison. Any creature that touches a psychotropifrog, either by making a successful attack with an unarmed strike or natural weapon or with a touch attack is affected by psychotropifrog toxin. A creature that grapples the psychotropifrog is also exposed to the creature’s toxic skin.

Psychotropifrogs are the guardians and product of fields of plants which acted as mind-altering drugs when eaten or burned. Ordinary frogs consumed the plants and expanded their minds in the process, passing this awakening on to their offspring. In addition, they became delivery vectors for the drugs they devoured. No longer desiring the plants, they live in harmony among the plants. In order to protect the plants from overharvesting for their psychotropic qualities, the frogs afflict intruders with the same effects as the plants.

Psychotropifrogs have no real intention of harming trespassers, but their bites are moderately powerful. They often intoxicate their foes and then barrage them with questions that seem wildly out of place for creatures of their apparent intellectual prowess. One of their favorite queries is, “Have you ever considered how we’re just players in someone else’s story?” Often, this odd line of inquiry sparks a revelation in someone under the effects of the drug.

A typical psychotropifrog measures 3 feet long, stands 2 feet tall, and weighs 50 pounds. It has an average lifespan of 20 years.