The Neglected Ancient Near Eastern Empire 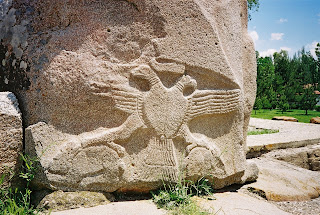 Haga or Two-headed Eagle
The Hittites on the Smithsonian Channel

Just a short, quick post.  I recommend the above linked documentary that's been showing on the Smithsonian Channel (so much more reliable quality than another supposedly historical channel that will remain unnamed). The Near Eastern mythoi get pretty thoroughly covered, but the Hittites, one of the major players, have not traditionally gotten their due.  I especially find them interesting because they are an Indo-European people in a largely Semitic context--which seems to have had significant influence on them.
Posted by Theodric the Obscure at 11:24 PM

NPR's When Robots Attack: New Mythologies for a New Age?


Adam Frank nicely poses a question for the mythopoeic crowd in the article linked above.  I guess I'd resist the notion that there's a new mythology and test the claim by trying to push back on it to see if we already have this myth covered.  Are there myths of creations destroying their creator, for example?  Myths of non-sentient things gaining sentience?  It would be interesting to take this on and see where things come out.  Another possibility that comes to mind: Is this just a manifestation of the death wish?  But whether we conclude that the form or substance of the myth is not new or not, we can still appreciate the new cultural guises and search for the meaning of the myth.  What does this say of our culture?


One thing that annoys me (possible massive understatement), is the new tendency for the digital voices we give to things, such as message services and alarm clocks, to say "I."  Do we not see the danger here?  I doubt the possibility of the emergence of consciousness from machines, and further wonder if the surface meaning of the myth could be a deadly distraction: have we so easily and quickly forgotten our tendency to dehumanize others and turn them into things?  Rectification of names, people!  If we confuse things with having selves, we're ready to confuse selves with things.  Once we do that, we will not flinch from snuffing out the "thing" that pleads, "I honestly think you ought to sit down calmly, take a stress pill, and think things over... Just what do you think you're doing...? ...I am afraid."  I wish there would be massive consumer reaction to this, so that companies would stop assigning agency and personhood to our machines.  Maybe the myths will come to our aid here, before it is too late.
Posted by Theodric the Obscure at 8:03 AM

Conversations with the chair of the psychology department reminded me of how much he loves the word "interesting," which reminded me of Bugs Bunny's assessment of Rudolph/Gossamer the monster:
Hair-Raising Hare (1946)
Water, Water Every Hare (1952)
The lesson to be learned from Bugs is old but bears repeating: for the rabbits among us, brains provide the means for dealing with monsters, not brawn.  Now if my friend and colleague can only tell me why we, like Bugs, find monsters to be the most interesting people.  Shadow, Dr. Jung?
Posted by Theodric the Obscure at 10:01 AM

Email ThisBlogThis!Share to TwitterShare to FacebookShare to Pinterest
Labels: Bestiary

Carl Jung believed that certain symbols had archetypal power, and that they were a part of the mind's imaginative and primal way of communicating. As for the God question, he usually would dodge the ultimate metaphysical question by asserting that he was treating the scientific question of God as the ultimate archetype of the mind itself, and of the collective unconscious beneath all individual, conscious minds.

Jung also believed that things repressed were relegated to the pressure cooker of the unconscious, eventually erupting forth in dramatic ways, forcing us to deal with whatever we were hiding from, whether as individuals or as a society. So if there were psychological issues being repressed by the individual, or larger issues being repressed by society, these would return in the symbolic language of the archetypes: notably in the individual in dreams. For society, these might manifest themselves in storytelling (myth and folklore in the ancient world, books, t.v., and films for us) or visual art.
I raise these two points to suggest that gods and monsters, relegated as they are to certain genres that are generally pushed out of the mainstream--even ridiculed!--represent the dynamic of repression on a societal level. (The ambiguity of the place of religion in contemporary life is another way in which these archetypes are very difficult for us, if not outright suppressed.) If Jung is right, their power will not be denied. Recent notices in mainstream media, linked below, prompted this reflection on gods and monsters in American culture.


Mythopoets such as Robert E. Howard (a recent publication prompting an article in the Wall Street Journal) may be odd balls, misfits, or madmen (1), but their commerce with gods and monsters find new distribution methods when forced underground. Consider, for example, Paul Devlin's recent article on Slate about the film True Grit [spoiler alert]. Following Jung's prediction, the archetypes being suppressed in their more obvious mythological guise are finding ways of being expressed in less obvious ways that will reach individuals who shy away from silly things like gods and monsters. "Don't like fantasy novels or films? More comfortable making fun of D&D nerds? (2) "Sure" says the collective unconscious, "Go watch your safe, comfortable Western. Pay no attention to the archetype hiding behind the eye patch."
One final fancy: As a Texan, I can't help but notice that the three instances of mythopoets I've run across in the news recently all connect with Texas: Howard the Texan, requisite Texas-related plot elements in a Western like True Grit, and...how does it connect to Guillermo del Toro, you ask? Well, just asking that question shows how much you know of the ties between Texas and Old Mexico. Perhaps out on the western frontier, where things are wilder and freer, suppression weakens.
Home, home on the range, where the gods and the monsters play...

(1) See the portrayal of "Two-Gun Bob" in The Whole Wide World.
(2) Perhaps this episode of NBC's Community is also a sign of the pressure for removing such societal suppression.
Posted by Theodric the Obscure at 2:12 PM