Howdy and welcome to another Frightful Fridays! (or Frightful word-ending-in-'days', which doesn't have quite the same ring to it) This entry is courtesy of Jason who pointed to a Cracked article about "the 24 most bizarre creatures on Earth," and these worms appealed to me, especially since they spray mucus to to capture their prey and slowly devour the ensnared prey. What's not to love?

Anyway, I hope you enjoy these giant velvet worms, and I hope to be back this Friday with a new monster. Thanks for reading! 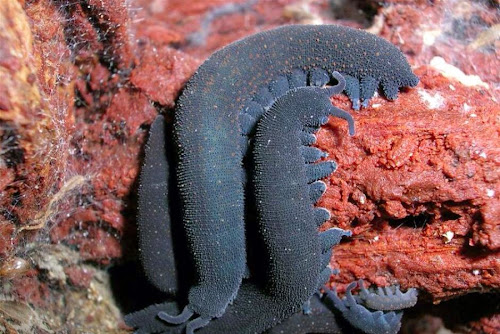 Special Abilities
Giant Velvet Worm Poison (Ex) Bite—injury; save Fort DC 19; frequency 1/round for 8 rounds; effect 2d4 Dex; cure 2 consecutive saves. The save DC is Constitution-based.
Spit (Ex) A giant velvet worm's spit acts as a tanglefoot bag, but the Reflex save DC to avoid being glued to the ground and the Strength check DC to break free increase by 4. Additionally, the spittle becomes fragile after 2d4 minutes. Finally, while a victim is glued to the ground, it takes 1d6 points of acid damage.

In primal jungles where every creature is writ large, giant versions of velvet worms keep up with their oversized prey. They possess the sticky mucus of normal velvet worms—which are more closely related to arachnids than worms—but can generate enough to ensnare humanoid creatures. The mucus also contains a bit of their digestive fluids, which softens up prey while the worms might be otherwise engaged. Finally, the worms deliver a virulent, paralytic poison with their bites. Giant velvet worms rarely attack anything larger than themselves, so clever adventurers rely on enlarge person and similar spells when venturing into known velvet worm territory.

Posted with Blogsy
Posted by Mike Welham at 9:16 PM

Hello and welcome back to another February Frightful Fridays! This week features a critter pointed out by Jason and Craig, and it's just so cute! That's why I needed to make it a CR 18 outsider that can blast its opponents with solid beams of color, and, when it gets tired of that, drop a prismatic spray or two. It's been that kind of week.

I hope you enjoy the "rainbow death butterfly kitten" (hat tip to Paris for the extra piece of the compound noun), and I'll be back next week, perhaps with something a little less ridiculous. Perhaps. Thanks for reading! 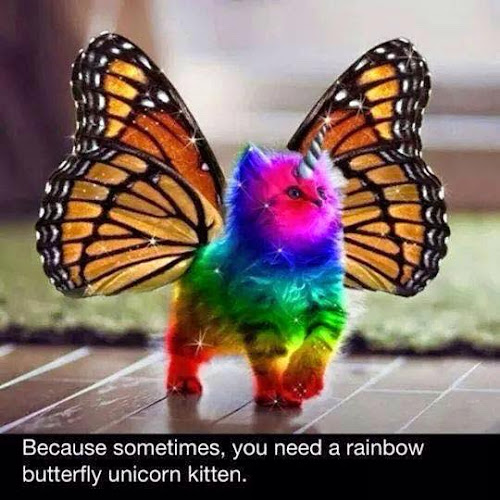 Darkness Dispelling Aura (Su) Light bends and warps around a regenbogentodschmetterlingkätzchen such that it suppresses darkness in a 90-foot-radius around it.

Discordant Color (Su) A regenbogentodschmetterlingkätzchen can radiate a 60-foot-radius aura of sight-destroying patterns of color as a free action. Creatures within the affected area must succeed on a DC 19 Fortitude save or be permanently blinded. A creature that successfully saves cannot be affected again by the regenbogentodschmetterlingkätzchen's ability for 24 hours. The save DC is Constitution-based.

Fluctuating Immunity (Su) At the beginning of an encounter, a regenbogentodschmetterlingkätzchen has complete immunity to two random energy types (acid, cold, electricity, or fire), and for one of those energy types (chosen randomly), it can reflect any spell or effect that only targets it. The creature has resist 20 for the other two energy types. As a swift action, it can randomly select the energy types from which it gains immunity.

Quasi-Invisibility (Su) The color-warping abilities possessed by the regenbogentodschmetterlingkätzchen allow it to use its Stealth without penalty, even when running or in plain sight.


Regenbogentodschmetterlingkätzchen (singular and plural are the same) normally reside in a demiplane comprised of a near infinite number of hues, most in the visible spectrum of light but still indiscernible by most creatures not native to the plane. This demiplane acts as the source of all color for the multiverse and touches every plane, except for varied locations on (mostly) evil-aligned planes devoid of all color. The creatures issue forth from their home plane, heralded by a seeming explosion of rainbows, after multiple successive castings of color-related spells within a small time frame—such as a wizard's duel where the combatants often choose prismatic spray or the like.


Communicating with regenbogentodschmetterlingkätzchen is an exercise in futility. The creatures understand the primary language of whatever plane they visit, but they cannot speak. Instead, they use color, in the visible spectrum as well as outside it, to express themselves. Two or more regenbogentodschmetterlingkätzchen create a nausea-inducing display of strobing colors when they "talk" among themselves.

Posted with Blogsy
Posted by Mike Welham at 11:30 PM

Hello there! It's been a while since the last installment of Frightful Fridays! and I apologize for my long absence, but I am back now with a new monster, with thanks to my friend Craig for the image. The nullephant's face is not just good for frightening everything that see it; it also conceals a deadly weapon. The creatures were born of nightmares and plan to continue producing nightmarish encounters with those they attack and such dry of their physical and mental essences.

I hope I managed to do this disconcerting image justice, and I hope you like the nullephant. I'll be back soon with a new monster. Thanks for reading! 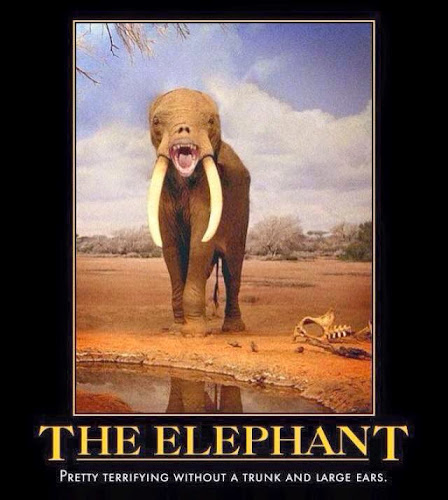 This appears to be an ordinary elephant, apart from the fact that its ears and trunk simply do not exist.
Nullephant CR 12
XP 19,200
NE Huge magical beast
Init –2; Senses darkvision 60 ft., low-light vision; Perception +17

Special Abilities
Null Trunk (Su) A nullephant's trunk remains invisible at all times and is immune to attempts to make it visible (through means such as faerie fire or glitterdust). Spells such as see invisibility allow the recipients to see the trunk as though it were composed of a hungering void. If an opponent cannot see the null trunk, the nullephant attacks its flat-footed armor class (mitigated by abilities such as uncanny dodge).
If a nullephant successfully grapples a foe with its trunk, it deals 1d4 points of Charisma drain and 1d4 points of Constitution drain. A victim must attempt two DC 23 Fortitude saving throws, one for each attribute. A success reduces the effect to 1 point of ability damage. Nullephants are immune to this ability. The save DCs are Constitution-based.

The so-called Nowhere Dimension is a malevolent plane of existence that seeks to consume every material bit of the universe, leaving nothing but void in its wake. Elder gods managed to wall off the rest of reality from the Nowhere Dimension, but occasionally it leaks through to the Material Plane—and other planes to a much lesser extent. It makes its incursions into primal areas virtually untouched by sentient beings other than fey and consumes what it can before ancient defenses once again seal off the breaches. Of all animals, elephants are the most sensitive to the Nowhere Dimension's intrusions, and their investigations typically come to horrifying ends. However, a hardy herd survived one such encounter, losing their trunks and ears to the void in the process. The event changed these elephants, which bore a mere fraction of the terrible hunger of the void in their trunks, driving the elephants to feed on the essence of other creatures. They grew more cunning, and their burgeoning intellect, nurtured by the living void, led them to seek out sentient prey.

Nullephants breed true with each other and they have a 50% chance of producing a nullephant when mating with an ordinary elephant. This birth invariably results in the new nullephant's mother becoming its first victim. The creatures gather in large numbers and attack en masse, relying on a surprising array of teamwork tactics. An individual nullephant attempts to grab one creature with its trunk, and, once it manages to snag a victim, it then relies on its tusks to keep rescuers at bay. Worse, a nullephant can extend the null field comprising its trunk to make itself completely invisible. Only the sound of heavy hooves give away a charging group of nullephants hiding in their null fields.

Posted with Blogsy
Posted by Mike Welham at 7:00 PM