Hello and welcome to this rain-delayed Frightful Fridays! OK, so rain wasn't the only thing delaying monster entries, but I'm back with an owl which has been exposed to the darkest secrets of the universe and has returned to share these secrets with everyone--regardless of whether they want to know. Even a brief glance into the creature's star-filled eyes induces mild insanity.

Also, Theodric has returned to the blog, breaking up the interminable monster posts. It means I'll have to share again, and I'm happy for it. Check out his latest post here: Swords & Wizardry: It's what I'm running.

I hope you enjoy the fundamentowl, and I'll be back again with another monster. Thanks for reading! 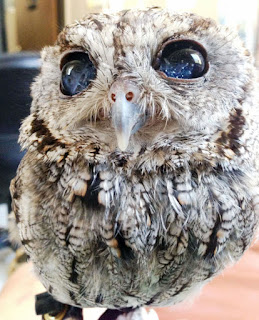 This owl has seen too much

Fundamentowls are one-time familiars which sought knowledge beyond what they gained while serving witches or wizards. These familiars traveled to faraway locations where reality bled away and revealed the secrets of the universe. While they gained considerable knowledge, their minds warped and they went mad. The familiars, shaped into owls for unfathomable reasons, returned to their homes and give in to their compulsions to share their secrets with other creatures, regardless of the detrimental side effects. Imparting knowledge, even forcibly, takes a burden off their minds at least for a while. Fundamentowls also locate familiars and tantalize them with hidden vistas of information denied to them by their masters, thus repeating the cycle.

Swords & Wizardry: It's what I'm running.

Well, it's been more than a while since you've heard from your obscure, rambling host, and Mike Welham has thankfully kept MPR from falling into utter dereliction. It might have something to do with moving across the country and having a new baby, but even before that I was running on low. Out of the interstices I creep to update you on the state of my game, which happily, will also largely be a post of joining in communal OSRness of the S&W kind.

How I got to S&W
The past 10 months, I have been playing in a weekly PF game by Skype, which has just now gone on a hiatus (I leveled my magus up to 5th level, thank you very much). The year before that, I was in a 5e game in which part of the time I DMed Tyranny of Dragons and a part of the time another player DMed Princes of the Apocalypse. In the further past in San Antonio, I had run a S&W Complete game set in Waterdeep in which I relocated old modules to Undermountain -- we were having fun but I couldn't get the group together enough to really build the kind of campaign I wanted. North Texas RPG Con 2016 just whetted my appetite even more for a regular home campaign in which we would build an interesting setting, characters, and stories. Now that I have the kind of home base I want in the old butcher's shop beneath my house (complete with a massive table left by a short-lived textile business of some kind), I have started said game using S&W.

The Players
I first found some experienced players among some of the college students of a nearby college town. As time progressed, they have proven to have a hard time continuing consistently because of their school and work loads, but I also have added two completely new players -- guys who always wanted to play but couldn't find people to teach them back in the day. Hey, scifi/fantasy reading clubs aren't a bad way to meet new players. I need to branch out again to find some more new players -- I'd like a bigger group and I miss the diversity that the college folks brought to the group. (Read: A group with gals is better.)

The Building Blocks
I started preparing the nascent setting by reading Hommlet and the original City State of the Invincible Overlord booklets. I decided Hommlet would be their home base and the province would belong to the City State. No Temple of Elemental Evil -- I would introduce another evil. The nearby town of Nulb? The characters original hometown, now in ruins thanks to an horrific event when they were children. Underneath the ruins? The Hall of Bones, adapted physically so that I could use the The Lost Catacombs pages for game mats. 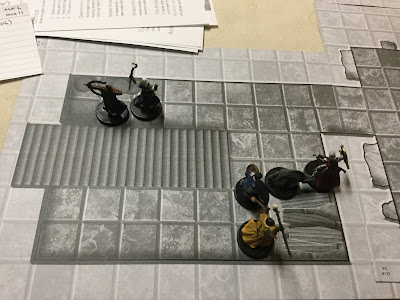 I looked at the gods of the CSIO and decided that they were a bit of a mess -- both an inspiring mess (How do I explain this hodgepodge of deities as a historical development and how would they actually work as a society's pantheon?) and a mess that needed some straightening up (too many gods of the same basic kind and other types completely missing). Here are the gods in the original booklet:

The historical key to this is that I decided the City State was a originally a colony found by a southern Rome analogue who hired Germanic/Nordic warriors to conquer a region peopled by monsters and Celt analogues. Their great, older rival was an Egypt analogue from whom they appropriated some deities -- all things Romans were wont to do. (Wikipedia has introductory entries on this process in the religious vein.) That allowed me to revise the list by identifying various gods with one another in the following way:

The rebellious gods of Pegana I kept around and the god Teutates=Toutatis (thanks, Astrix comics!) became simply a title that a social group would add to the name of their patron deity. I'm still playing around with how I'm going to handle the spider god, though Wraith Overlord: Terror of the City State has a nice idea in it. (Where the heck did that title come from? Still haven't figured it out.) And I'm still playing with what exactly I'm going to do with the Crimson Dragon. Also, a few deities also indicate that the Rome analogue not only had the rivalry with an Egypt analogue, but also some sort of contact with an Indic analogue. (Meso-america is for dragons.)

Deities I added
First off, I needed a paladin patron to take the places of Muir (I don't care for the name) and Cuthbert (I wanted to cut the odd real-world tie here and have a Joan of Arc like feel to the figure, but germanified). Thus was born St. Ingaberht. She heads the following list:

This kind of top-down work gave me lots of ideas for the setting and hooks for potential stories, and allows the players to locate their characters within the setting. Less of them took me up on the idea of having their character being from Nulb, but they still came up with ideas for why they were in Hommlet and interested in Nulb and each other, so it worked out.

Now the question, Why and how does S&W provide the ruleset for this campaign? To be continued in a second posting!
Posted by Dr. Obscure at 11:07 AM