Welcome to a brief Frightful Fridays! entry. I have plans for a few monsters that have been piling up in the corner, which I hope I can bring to fruition later today. In the meantime, serendipity in the form of a strange online conversation with friends led to a challenge to stat up the fiery ant.

I hope you like this critter, and I hope to be back soon with some other monsters. Thanks for reading! 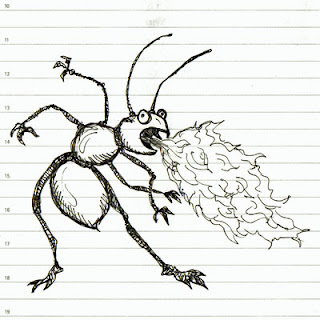 Some ants just want to watch the world burn. Fiery ants bring the tenacity of normal fire ants and add a literal burning to their terrible bites. These ants are rarely encountered as solitary creatures, and a victim who stumbles upon a fiery ant colony finds itself the target of dozens of frenzied ants that bite and latch on to their prey. A typical fiery ant is as large as a house cat, and it lives in a mound that measures 20 feet in diameter and is 10 feet high.

Welcome back to a new Frightful Fridays! installment. Today's find is thanks to Gregg, who always discovers the most pleasant, friendly, and downright huggable monsters. The artist who created the monster gave it the moniker Rah'Yeran, which is a great name, but I didn't feel like borrowing the name. For inspiration, I went to a recurring theme where Gregg's characters have been outright murdered by my halflings or when my halflings were present, always involving fire. Thus the Burnville Horror, a monstrosity greatly suited for making a halfling's day very, very bad, was born. Today's extra adds insult to injury for halflings who survive a Burnville Horror's assault.

I hope you enjoy today's monster, and I'll be back next week with yet another installment. As always, thanks for reading! 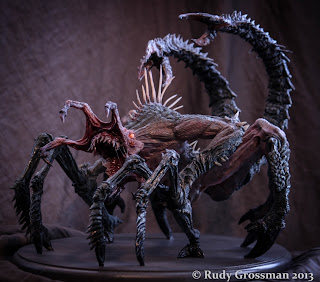 This frightening creation can be found here!

Special Abilities
Fear Aura (Su) Halflings do not receive their racial bonuses on saving throws (from fearless or halfling luck, for example) against the Burnville Horror's fear aura. For halflings who fail their Will saves, the fear aura paralyzes them for 2d4 rounds, while the aura functions like the fear spell for other victims.
Halfling Foe (Ex) The Burnville Horror treats halflings as its favored enemy. It gains a +8 bonus on Bluff, Perception, Sense Motive, and Survival checks against halflings. Additionally, it gains a +8 bonus on attack and damage rolls against them.
Sidestep (Su) The Burnville Horror can take an immediate action to move 5 feet. The creature can still take a normal 5-foot step during its turn.

The Burnville Horror is named for the first reported encounter with the creature, an encounter that ended with the deaths of ninety percent of Burnville's halfling population. The handful of survivors reported that the creature could have easily caught them, but it seemed to allow them to leave safely. It chose the survivors at random, and no common thread united the survivors, leaving one conclusion: the Burnville Horror wanted them to spread the word about its presence. Since the first attack, Burnville Horror attacks have occurred in other halfling communities infrequently, but they follow the same pattern as the initial attack.

Genetically and magically modified from giant spider stock or created whole cloth, a Burnville Horror bristles with an array of weapons that enhance its murder sprees. The creature has a great deal of mobility, and its powerful claws allow it to climb most surfaces. The creature also projects an aura of fear that drives away all creatures except halflings, who are frozen in place while the Horror slaughters them. A Burnville Horror presented with a mix of creatures focuses its attacks on halflings to the exclusion of all other targets, unless something else offers stiff opposition. In extremely rare cases where the Horror must escape, it burrows into the ground.

A Burnville Horror stands 8 feet tall and measures 7 feet in diameter, with its pincered tails adding an extra 2 feet. The creature weighs 550 pounds.

Burnville Curse
The original Burnville Horror allowed the handful of halflings to flee the carnage at Burnville for a reason beyond merely sowing fear. All the survivors who witnessed the Horror's attack suffer from the Burnville Curse, which slowly drives its victims mad, and, after a victim succumbs to insanity, warps the victim's body into a new Burnville Horror. Only the original Horror possesses the ability to inflict the curse.

Burnville Curse
Type curse; Save Will DC 19 (non-halflings automatically succeed)
Onset 1 day; Frequency 1/day
Effect 1d6 Wis damage, target must make a second Will save or 1 point of the damage is drain instead, once the victim reaches Wis 0, it becomes permanently insane; Effect (once victim reaches Wis 0) 1d4 Dex drain (no save), at Dex 0, the victim transforms into a Burnville Horror; Cure the curse can only be cured by destroying the original Burnville Horror and then successfully casting remove curse (heal is required for a victim at Wis 0, and a transformed victim requires miracle or wish).

A little late again this week, but sickness isn’t gonna keep me down, even if I did sleep for 28 out of 36 hours between Saturday night and Monday morning. And so, in honour of my sickness and without further preamble, I give to you the Putrescent Aspis.

Putrescent Aspis
Aura Moderate Conjuration; CL 7th
Slot shield; Price 30,957gp; Weight 10 lb.
DESCRIPTION
Despite its name, this round +2 Putrid Heavy Wooden Shield protects it’s wielder from all manner of contagions.
At will, the holder of a Putrescent Aspis can detect poison in either himself or in anything that is placed in the inner curve of the shield while held by him. Once per day it can also neutralize poison or remove disease in the same manner. It can only do one or the other, either neutralize or remove, per day not both.
CONSTRUCTION
Requirements Craft Magic Arms and Armor, detect poison, neutralize poison, remove disease, stinking cloud; Cost 15,478gp 5sp