Hello, and welcome back to the latest Frightful Fridays post! Day job and freelance deadlines have kept me away from the blog, but I am delighted to bring you another seasonal monster, this one pointed out to me by my good friend Patrick. Since yesterday was Thanksgiving in America, and the usual tradition is turkey, a lot of turkey-themed images appeared on the internet. This one was too delightful to pass up, and so I present the griffurkey, one of the most ornery creatures from which to obtain delicious roasted meat.

I hope you enjoy today's monster, and I should be back next week with something different. Thanks for reading! 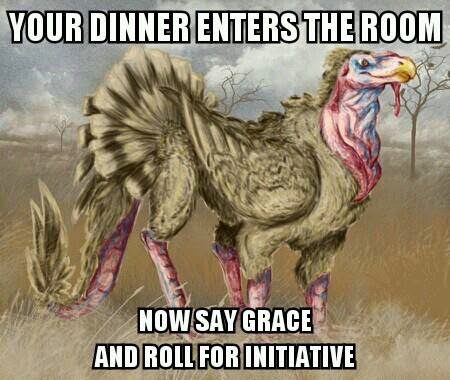 This strange creature has the body of a lion, and the head—complete with wattle—stumpy wings, and feathered fan belonging to a turkey.
Griffurkey CR 5
XP 1,600
N Large magical beast
Init +1; Senses darkvision 60 ft., low-light vision; Perception +17

Some barbaric tribes feel that the thrill of the hunt and the potential for grievous injury at the teeth, claws, and talons of their prey makes the meat all the tastier. This definitely holds true for the beast known as the griffurkey, an aggressive and ill-tempered combination of lion the turkey. Considering their resemblance to the majestic griffon, it is curious that the barbarians describe the meat as a combination of fowl and horse flesh.

Griffurkeys certainly look less than regal compared to their griffon cousins, as their unimpressive wingspan makes them clumsier at flying. They are also less intelligent than griffons, and most people would agree that they are less aesthetically pleasing. However, griffurkeys are powerful and bellicose creatures that prefer to attack creatures with similar temperaments, such as boars and bears. They prefer to attack by flying through their intended prey, knocking their victims down before pouncing on them and attacking with their array of terrifying natural weapons.

Aficionados of griffurkey meat have met with failure in domesticating the creatures and raising them on farms. Even those griffurkeys raised from hatchlings turn their ire against those who have captured them well before they become a viable source of meat. The creatures attack those who attempt to handle them and repeatedly bash themselves against enclosures in their overwhelming desire to escape captivity. Likewise, efforts to training griffurkeys as mounts akin to griffons have met with the same bullheaded attitude.

Posted with Blogsy
Posted by Mike Welham at 8:00 PM