Hello, and welcome back to a new Frightful Fridays! After skipping a week for GenCon, I'm back with a foggy golem for you. It's a walking cloudkill, which should be a lot of fun for GMs, but not so much fun for characters.

I hope you enjoy the fog golem, and I'll be back next week with another monster. Thanks for reading! 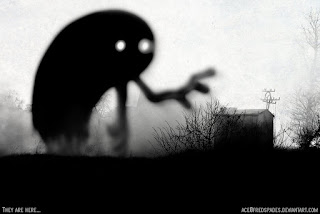 This neat illustration can be found here


This creature’s dark grey humanoid shape barely stands out in the enormous fog bank billowing around it as it moves.
Fog Golem      CR 9
XP 6,400
N Huge construct
Init +8; Senses darkvision 60 ft., fog vision, low-light vision; Perception +10
Aura fog cloud (20 ft.)
DEFENSE
AC 17, touch 17, flat-footed 8 (+8 Dex, +1 dodge, –2 size)
hp 118 (12d10+52); fast healing 5
Fort +4, Ref +12, Will +6
DR 10/adamantine and magic; Immune construct traits, critical hits, elemental composition, magic, sneak attacks
OFFENSE
Speed fly 30 ft. (perfect)
Melee 2 slams +18 (elemental strike)
Space 15 ft.; Reach 15 ft.
Special Attacks engulf (DC 18, elemental strike and cloudkill)
Spell-Like Abilities (CL 12th; concentration +14)
Constant—gaseous form
STATISTICS
Str 7, Dex 27, Con —, Int —, Wis 15, Cha 14
Base Atk +12; CMB +12; CMD 31 (can't be tripped)
Feats Dodge, Mobility, Toughness, Weapon Finesse
Skills Fly +12, Perception +10, Stealth +0 (+16 in fog); Racial Modifiers +8 Perception, +16 Stealth in fog
ECOLOGY
Environment any land
Organization solitary, pair, or bank (3–6)
Treasure none
SPECIAL ABILITIES
Elemental Composition (Ex) A fog golem can change its composition to a particular energy type as a move action. It can select acid, cold, electricity, or fire. It is immune to the chosen energy type. If the golem’s controller is not available to command it to change its composition, it changes to protect itself from the most recently used energy type to damage it. If it has not been damaged, it changes composition to bypass resistances or immunities enjoyed by its foes; in this case, it chooses acid, cold, electricity, and fire in order. The golem starts a typical encounter with an acid composition.
Elemental Strike (Ex) A fog golem’s slam attacks deals 2d6+12 points of damage based on the chosen energy type (acid, cold, electricity, fire) for its elemental composition.
Engulf (Ex) A fog golem deals its elemental strike damage to all targets it engulfs, and it subjects them to the effects of the cloudkill spell (DC 17 Fortitude partial). The save DC to avoid being engulfed includes a +4 racial bonus. The save DC for the cloudkill effect is Charisma-based.
Fog Cloud (Ex) Fog surrounds a fog golem as per the fog cloud spell. If the fog is dispersed, the golem regenerates it at the end of its next turn.
Fog Vision (Ex) A fog golem can see perfectly well in fog and clouds.
Immunity to Magic (Ex) A fog golem is immune to spells and spell-like abilities that allow spell resistance. Certain spells and effects function differently against it, as noted below.

Whereas a single elemental spirit animates most golems, a minimum of one elemental spirit for each of the four elements animate fog golems. Fog golems guard locations where their ability to pass through tiny spaces make them more valuable than other golems. While they are mindless, they are capable of adapting their energy signatures to effectively combat opponents reliant on or protected against specific energy types. Acid-imbued fog golems’ caustic fluid sizzles when it condenses, cold-imbued golems form stinging icy crystals, electricity-imbued golems crackle angrily, and fire-imbued golems release ash and smoke rather than fog.

CONSTRUCTION
A fog golem’s body consists of specially treated gases infused with all four elements. The gases must be treated with oils worth 2,000 gp.