Hello, and welcome to a late edition of Frightful Fridays! I'm keeping with the arachnid theme, and I blame my friend JD, who mentioned something about laser scorpions. I couldn't get it out of my head, and it morphed into the gunner scorpion you see below. It still blasts opposing creatures, but not with lasers. I also threw in a magic item to make up for the lateness.

I hope you enjoy the gunner scorpion, and I'll be back next time with a new monster. Thanks for reading! 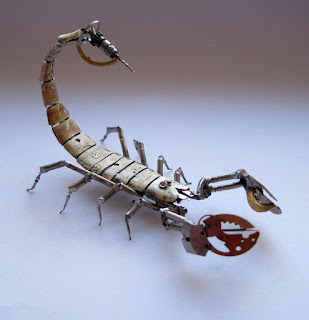 The laser scorpion this author did not have the guts to stat up.


This gigantic, slate-gray scorpion has a tail that ends in two stingers, each of which fits loosely within its socket.
Gunner Scorpion      CR 11
XP 12,800
N Gargantuan magical beast
Init +4; Senses darkvision 60 ft., low-light vision, tremorsense 60 ft.; Perception +26
DEFENSE
AC 26, touch 10, flat-footed 22 (+4 Dex, +16 natural, –4 size)
hp 147 (14d10+70); fast healing 2
Fort +14, Ref +13, Will +7
DR 10/piercing; Immune energy immunity, mind-affecting effects; Resist acid 5, cold 5, electricity 5, fire 5
OFFENSE
Speed 60 ft., burrow 40 ft.
Melee 2 claws +20 (1d8+10 plus grab), sting +20 (2d8+10/19–20)
Ranged 4 stingers +14 (1d8+15)
Space 20 ft.; Reach 15 ft. (25 ft. with sting)
Special Attacks hail of stingers, incendiary rounds, overload
STATISTICS
Str 31, Dex 18, Con 21, Int 2, Wis 16, Cha 4
Base Atk +14; CMB +28 (+32 grapple); CMD 42 (50 vs. trip)
Feats Combat Reflexes, DisruptiveB, Improved Critical (sting), Opening Volley[UC], Skill Focus (Perception), SpellbreakerB, Stand Still
Skills Acrobatics +4 (+16 to jump), Perception +26, Stealth –8 (+8 in rocky environments); Racial Modifiers +16 Stealth in rocky environments
ECOLOGY
Environment any land
Organization solitary, pair, or squad (3–6)
Treasure none
SPECIAL ABILITIES
Energy Immunity (Ex) A gunner scorpion is immune to the energy type dealt by its incendiary rounds.
Hail of Stingers (Ex) Once per day as a full-round action, a gunner scorpion can launch a 60-foot cone of stingers, which deals 8d6 piercing damage to every creature within the cone (DC 22 Reflex half). The scorpion is fatigued after using this ability, it loses the benefit of fast healing for 1 round, and it cannot use its ranged attack for 1 round.
Incendiary Rounds (Ex) A gunner scorpion has a store of one type of energy within its system. This defaults to fire, but it can eat an alchemical concoction that changes the energy type. This grants immunity to the chosen energy type, and allows the scorpion to add 2d6 points of energy damage to its stingers. As it takes a while to apply the energy to its stingers, this reduces its rate of fire to 2 stingers per round.
Overload (Ex) The energies stored within a gunner scorpion explode when the creature dies. Every creature in a 30-foot spread takes 6d6 damage of the energy type the scorpion uses for its incendiary rounds (DC 22 Reflex half). Someone capable of controlling the scorpion can order it to “self-destruct” to deal this damage.
Stingers (Ex) A gunner scorpion fires can fire up to 4 stingers at multiple targets, no two of which can be further than 30 feet apart. The stingers have a 60-ft. range increment.

Engineered by races that use scorpions as weapons of war, gunner scorpions are devastating creatures employed by those races. These creatures primarily attack at range, but they have learned techniques to deal with opponents within melee range of their claws and stinger. They are especially effective in close combat with spellcasters. They have internal stores of fire within their hard carapaces, allowing them to apply flame to their ranged stinger attacks, but their controllers can feed them material that changes the composition of the energy for 24 hours. Gunner scorpion controllers either master vermin empathy or employ magic items to give orders to the creatures.

Crawling Crown
Aura moderate transmutation; CL 11th
Slot head; Price 28,000 gp; Weight 1 lb.
DESCRIPTION
Images of multiple species of vermin cover this iron crown. When placed on the wearer’s head, the images crawl around the crown in disconcerting fashion. The wearer can control vermin and vermin-like magical beasts with an intelligence of 2 or less as if she possessed the wild empathy ability. If she already has the wild empathy ability, she gains a +4 enhancement bonus on wild empathy checks to influence such creatures.
Once per day, the wearer can transform her skin into one or more swarms, as per swarm skin, but she may only choose vermin swarms.
CONSTRUCTION
Requirements Craft Wondrous Item, swarm skinAPG, creator must have wild empathy or vermin empathy ability; Cost 14,000 gp

Hello and welcome back to this edition of Frightful Fridays! Drejk posted this beauty on my wall this week, and it inspired me to create the sanguinary spider. It loves your character's blood, and it has many ways of extracting it and making sure the blood keeps flowing.

I hope you enjoy(?) the sanguinary spider, and I'll be back next time with a new monster. Thanks for reading! 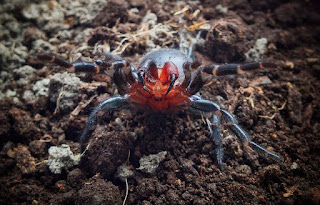 Sitting at the center of a bloody mass of webs, sanguinary spiders prefer to wait for prey to stumble into their territories. Though they can sense blood-filled prey from a great distance, they wait until such prey get within range of their hemorrhagic aura before launching an attack and finishing the job started by the aura. If potential meals flee from sanguinary spiders, they still collect enough blood to sate their hungers until more prey arrives. In dire circumstances against troublesome foes, the spiders can animate blood into humanoid facsimiles for protection. The creatures spin webs from congealing remains they do not feed upon; these webs do not entangle prey, but they are unnervingly sticky from the drying blood.