Welcome to Frightful Fridays: Halloween Edition! Theodric and his associates find many unusual images that beg to be turned into monsters for the Pathfinder Roleplaying Game, so I'm hoping to turn this into a regular feature. The first offering is based on the image of the creepy assassin bug, which uses its victims as armor and as a convenient place to hide so it can ambush other prey.

Stay tuned for the next monster a week from Friday! 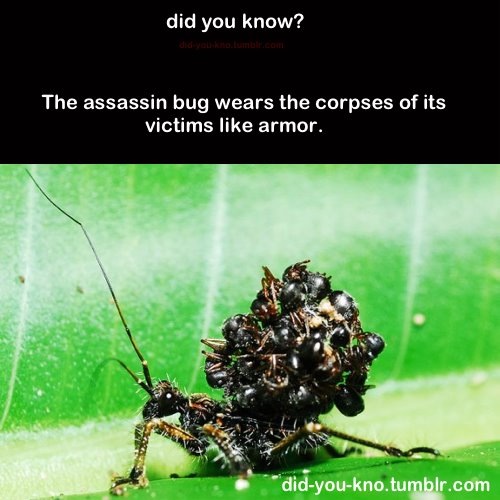 This large, brown insect has an elongated head with a distinct narrowed neck, long legs, and a prominent, segmented rostrum. It has a pair of corpses impaled on spiky bristles jutting out from its abdomen.
Giant Assassin Bug     CR 3
XP 800
N Medium vermin
Init +1; Senses darkvision 60 ft.; Perception +5

Special Abilities
Corpse Armor (Ex) A giant assassin bug may take a standard action to pick up a corpse and use it as natural armor. Every Medium corpse (or two Small corpses) it attaches to itself provides an additional +1 natural armor bonus, up to a maximum of +4. The assassin bug does not benefit from smaller or larger corpses. A typical encounter with a giant assassin bug starts with the creature having enough corpses to give it AC 16.
Corpse Camouflage (Ex) An assassin bug gains a +8 bonus to its Stealth checks when it buries itself under at least two Medium creatures’ corpses.
Poison (Ex) Bite—injury; save Fort DC 15; frequency 1/round for 6 rounds; effect 1d2 Con; cure 2 consecutive saves. The save DC is Constitution-based.
Stridulation (Ex) An assassin bug rubs its rostrum against ridges in its prosternum to produce a frightening sound. All creatures within 60 feet of the assassin bug must succeed at a DC 11 Will save to avoid becoming shaken. A victim who succeeds at the save is immune to that particular assassin bug’s stridulation for 24 hours. This is a mind-affecting fear effect, and its save DC is Charisma-based.

A giant assassin bug is no different from the considerably smaller, normal version of the creature…with the disturbing exception that it is large enough to grab a fallen member of an adventuring party and use the corpse as a shield against the corpse’s former allies. A typical specimen is five feet in length (excluding the six-inch rostrum) and weighs about 100 pounds.

Much like the normal assassin bug, the giant version preys on large arthropods, and characters may interrupt a single assassin bug (or a group) tearing through a giant ant hive. The creature relies on its rostrum to deliver a powerful bite that also injects its prey with a liquefying poison. An assassin bug fighting multiple foes will switch to a new opponent when it successfully bites one. When any of its foes die, the assassin bug instinctively moves to grab its dead victim as impromptu armor by impaling the corpse on its otherwise harmless spikes.

Occasionally, an enterprising necromancer employs giant assassin bugs as weird allies to the mindless undead he creates. A bug hides among decaying zombies and sometimes bears a couple of the creatures on its spikes as writhing armor. The bug is, of course, immune to channel attempts used to harm undead creatures, and once the bug has feasted on the liquefied remains of its victims, the necromancer has more corpses to replace any fallen zombies.

Yes, I've been crazy busy and having trouble finding time for posting.  I did find time to finally read two contemporary vampire classics that I'd been planning on for this Halloween: 'Salem's Lot and Anno Dracula.  The former hit my horror button harder and the latter hit my Victoriana fanboy button harder, but I enjoyed and recommend both if you haven't gotten around to them.  I am Legend will just have to wait for some other year.  What did you sink your teeth into this year, my blood-thirsty ramblers?