Hello and welcome to a new installment of Frightful Fridays! I was going through the archives of images provided by friends, and I came across a margay which can mimic the sounds of monkeys to help in their hunts. I extrapolated this inherent sonic capability, so the echocat can create sonic constructs which last for a little while and have nearly the same physical potency as the echocat.

I hope you enjoy the echocat, and I'll see you next time with another monster. Thanks for reading! 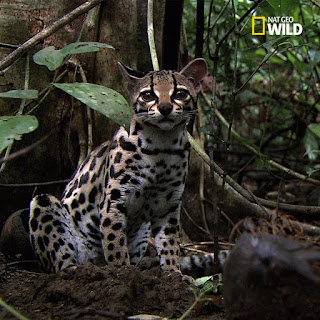 It's really cute, until it screams.

Echocats come from the same unusual locations which spawned destrachans and yrthaks, but the smaller animals made forest and jungles their homes where they can avoid the larger predators and prey upon smaller animals in turn. Their primary prey consists of monkeys and other primates, which the cats draw into their waiting jaws by mimicking calls produced by their prey. Easily frightened by larger creatures, echocats attempt to wait such creatures out while perched on branches where their patterned fur allows them to blend in with the foliage. If they must attack, they make liberal use of their sonic screams and create echoes of themselves while using devastating attacks while travelling at the speed of sound, duplicating the effects of dimension door. Once at a safe distance, they throw their voices to draw away attackers. If they must stay and fight, they make tactical use of their sonic copies.

While echocats cannot normally be taken as companion creatures, they enjoy travelling with bards and creatures with sonic abilities. Harpies who manage to control their destructive urges keep echocats for extra protection.

Echocats are 4 feet long, including a nearly foot-long tail, and weigh 50 pounds.

Hello, and welcome to this week's Frightful Fridays! My college-age child suggested a squirrel that moved around the battlefield like a bullet, and I happen to feature a lot of squirrels on the blog (I'm actually afraid to count the number of squirrel entries I have), so this was a no-brainer. This should go from, "oh, look at the cute little squirrel" to "why am I on the ground and my arm is broken" for your characters pretty quickly.

I hope you enjoy the bullet squirrel, and I'll see you next time with another monster. Thanks for reading! 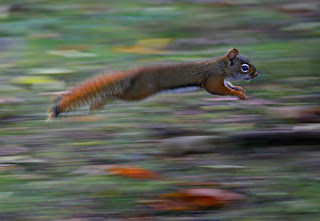 
This minute gray squirrel zips about unpredictably, making a loud crack as it shoots from location to location.
Bullet Squirrel      CR 5
XP 1,600
N Tiny animal
Init +5; Senses low-light vision, tremorsense 60 ft.; Perception +8
DEFENSE
AC 18, touch 18, flat-footed 12 (+5 Dex, +1 dodge, +2 size)
hp 52 (7d8+21)
Fort +8, Ref +10, Will +4
Defenses hardheaded; Resist fire 10
OFFENSE
Speed 10 ft., burrow 30 ft., fly 90 ft. (perfect); bullet trajectory
Melee bite +12 (1d3–4), slam +12 (1d4–4)
Space 2½ ft.; Reach 0 ft.
Special Attacks gunshot slam
STATISTICS
Str 3, Dex 21, Con 16, Int 2, Wis 14, Cha 11
Base Atk +5; CMB +8 (+10 bull rush); CMD 15 (17 vs. bull rush, 19 vs. trip)
Feats Death from AboveUC, Dodge, Improved Bull RushB, Mobility, Weapon Finesse
Skills Acrobatics +15, Fly +17, Perception +8, Stealth +17; Racial Modifiers +4 Acrobatics
ECOLOGY
Environment temperate forests
Organization solitary, pair, magazine (3–20)
Treasure incidental
SPECIAL ABILITIES
Bullet Trajectory (Ex) A bullet squirrel can only burrow or fly in a straight line, and it must travel its full movement rate when it burrows or flies. If it flies into the ground, it reduces it burrow speed by 1/3 the  distance it flew. If it flies out of the ground, it reduces its fly speed by 3 times the distance it burrowed. If the squirrel strikes a solid object other than a creature, it takes damage as if it had fallen a distance equal to its remaining movement.
Gunshot Slam (Ex) When a bullet squirrel burrows or flies, it acts as if it is charging, with the applicable +2 bonus on its attack and a –2 penalty to its AC, its slam attack deals 2d4 points of damage plus 1d6 fire damage, and it adds its Dexterity modifier rather than its Strength modifier to damage from its slam. Additionally, the squirrel receives a free bull rush attempt against the target of its attack. If it exceeds the target’s CMD by 5 or more (or rolls a natural 20), it can opt to knock the target prone rather than push the target back.
Hardheaded (Ex) A bullet squirrel leads with its head when it attacks or faces a situation where it could take damage. When it falls or takes damage from its bullet trajectory ability, it can attempt a Reflex save (DC 10 + 5 for every 10 feet of the fall) to take half damage.

For whatever unfathomable reason, squirrels more than any mammals other than bats have received the gift of flight. The same is true of bullet squirrels which fly with incredible velocities, allowing them to shoot into soft ground as well. The animals use this incredible ability to store nuts deep in the ground, and away from carefully dug out warrens, where only they can reach. Their bulletlike flight allows them to defend themselves against predators or quickly escape in dire situations. This has made the miniscule creatures aggressive, and they often shoot right into creatures intruding on their territory. They also consume their weight in fruits and nuts every day to feed their fast metabolisms.

Bullet squirrels are nearly 1 foot in length and weigh 2 pounds. They live up to 10 years and, in the wild, produce a litter of 1d6 young twice a year.

Hello, and welcome to another week of Frightful Fridays, slowly but surely becoming a complete misnomer. In honor (horror) of the infamous puppybabymonkey from last year's Super Bowl, I'm throwing out a slightly more reasonable mashup today. It just wants to give player characters hugs!

I hope you enjoy the grabbly bear, and I'll see you sometime in the future with another monster. Thanks for reading! 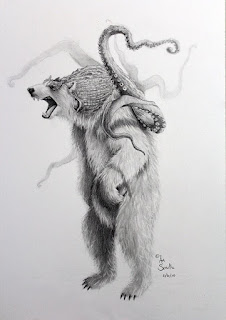 Grabbly bears (alternatively: squid bears, ursopuses, or squears) are the creations of a mad deity from antiquity or the deity’s powerful minions. The fusion of squid and bear stuck and the creatures bred true. While many sunk beneath the waves to prey on creatures underwater, some remained on dry land to terrorize victims there. Their adaptability to a variety of environments and their spongy bodies make them difficult to avoid or kill. They usually target obvious spellcasters when they open combat to neutralize their greatest threats, by making it impossible for the victims to intone their spells. They then pull prey into their embrace, first by using their tentacles to bring victims closer and then with their claws as they deliver a crushing bear hug. While grabbly bears are moderately intelligent and are capable of tactics on the battlefield, very few of them flee once they join battle. When they die, they unleash a shrieking paean to their sleeping deity.

Powerful aberrant creatures capable of speaking Aklo can exert a modicum of control over grabbly bears, but they usually use this power to direct the creatures to attack their enemies and leave them untouched.