Hello, and welcome back to a new edition of Frightful Fridays! (slightly delayed) This week's monster goes against my normal appreciation for gnomes and fey by bringing out an undead monstrosity focused on fey (and gnomes thanks to their bloodline). It's still a potentially nasty monster against other characters, too.

I hope you enjoy the flabberghast, and I'll be back later with another monster. Thanks for reading! 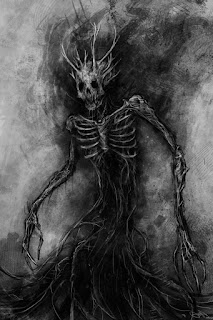 This neat monster illustration can be found here

This skeletal creature’s bones fade into a set of withered brambles where its legs should be. It has alternatively bony and branch-like horns protruding form its skull.
Flabberghast    CR 6
XP 2,400
CE Medium undead
Init +4; Senses darkvision 60 ft.; Perception +15
Aura aura of despair (10 ft., DC 17)
DEFENSE
AC 18, touch 14, flat-footed 14 (+4 Dex, +4 natural)
hp 67 (9d8+27)
Fort +6, Ref +9, Will +9
Defensive Abilities evasion; DR 5/cold iron; Immune undead traits; Resist cold 20, electricity 10; SR 17
Weaknesses compulsion vulnerability
OFFENSE
Speed 30 ft., fly 40 ft. (good)
Melee 2 claws +11 (1d6+2 plus 1d6 Cha damage), gore +10 (1d8+2)
Special Attacks broken beauty, create spawn, feybane, rend (2 claws, 1d6+3)
Spell-Like Abilities (CL 9th; concentration +12)
3/day—dancing lights, faerie fire
1/day—confusion (DC 16), deep slumber (DC 16), entangle (DC 14), glitterdust (DC 15), major image (DC 16)
STATISTICS
Str 14, Dex 19, Con —, Int 17, Wis 16, Cha 17
Base Atk +6; CMB +8; CMD 22
Feats Combat Casting, Lightning Reflexes, Vital Strike, Weapon Finesse, Weapon Focus (claw)
Skills Bluff +12, Fly +12, Intimidate +15, Knowledge (arcana) +11, Knowledge (nature) +12, Perception +15, Sense Motive +15, Spellcraft +11, Stealth +14
Languages Aklo, Common, Sylvan
ECOLOGY
Environment any land
Organization solitary, pair, reprisal (3–6)
Treasure standard
SPECIAL ABILITIES
Aura of Despair (Su) Any creature within or entering a flabberghast’s aura must succeed on a DC 17 Will save or take a –2 penalty on attack rolls, saving throws, ability and skill checks, and weapon damage for as long as it remains within the aura. A creature that successfully saves is immune to the same flabberghast’s aura for 24 hours. The save DC is Charisma-based.
Additionally, a flabberghast suppresses spells and effects granting morale bonuses within its aura, but it does not dispel them.
Broken Beauty (Su) If a flabberghast confirms a critical hit with its claws, in addition to inflicting 1d6 points of Charisma damage, it deals 1d2 points of Charisma drain (DC 17 Will save negates). If the flabberghast successfully drains Charisma, it gains a temporary +1 enhancement bonus to all Charisma-based skill checks, and save DCs for its spells and abilities. These bonuses stack with each other and last for 1 hour. The save DC is Charisma-based.
Compulsion Vulnerability (Su) A flabberghast generally enjoys an undead creature’s immunity to mind-affecting effects, but it still falls prey to the seemingly bizarre rules governing fey. It must attempt a Will save against a spell or effect with the compulsion descriptor, and it incurs a –4 penalty on such saves.
Create Spawn (Su) If the flabberghast kills a gnome or a fey creature, either through damage or by reducing the creature to 0 Charisma, the creature returns as a flabberghast one hour later. Other creatures killed by a flabberghast rise as ghasts.
Feybane (Su) Once per day as a swift action, a flabberghast can imbue its gore attack with the bane (fey creatures and gnomes) weapon ability for 1 minute.

Fey are no strangers to undeath and several of their number fall prey to vampires, spectres, and other foul creatures. However, flabberghasts are undead unique to fey. Typically resulting from fey creatures brought low by the backstabbing machinations omnipresent in faerie courts, flabberghasts return to a twisted form of unlife, embittered against all other fey. This hatred also applies to humanoids with fey origins such as gnomes. Flabberghasts prefer targeting the objects of their ire over other creatures but are not so overwhelmed by rage to ignore obvious threats. Ultimately, the creatures wish to diminish all beauty in the world and often stop just short of killing foes to force them to suffer (at least temporarily) with disfigurations.

Despite, or perhaps because of, their antipathy toward fey, flabberghasts ally with unseelie fey to destroy their opponents. Only powerful nobles deal with flabberghasts, because the creatures almost invariably seek to betray their allies, usually after bolstering their numbers.

Hello, and welcome to a beeelated Frightful Fridays! Life got extremely busy, and I missed working on new critters for the blog. But this little squid spoke to me, and I was compelled to return this week to put it out there.

I hope you enjoy the stubby squid, and I shall be back sooner than two month's time with another monster. Thanks for reading!

Read about this cutie over here

This miniature purple squid has large, expressive eyes. It waves its tentacles seemingly in greeting.
Stubby Squid    CR 4
XP 1,200
CN Diminutive aberration (aquatic)
Init +7; Senses darkvision 60 ft.; Perception +11
DEFENSE
AC 19, touch 17, flat-footed 16 (+3 Dex, +2 natural, +4 size)
hp 42 (5d8+20); fast healing 2
Fort +5, Ref +4, Will +7
Defensive Abilities amorphous; Resist acid 10; SR 16
OFFENSE
Speed 10 ft., swim 40 ft.
Melee 4 tentacles +10 (1d4–4 plus attach)
Space 1 ft.; Reach 0 ft.
Special Attacks attach, dehydrate, mind swap
Spell-Like Abilities (CL 5th; concentration +8)
3/day—water breathing (other creatures only)
STATISTICS
Str 3, Dex 16, Con 18, Int 13, Wis 17, Cha 16
Base Atk +3; CMB +2 (+6 grapple); CMD 8 (16 vs. grapple and trip)
Feats Go UnnoticedAPG, Improved Initiative, Skill Focus (Bluff), Weapon FinesseB
Skills Bluff +11, Escape Artist +11, Perception +11, Sense Motive +8, Stealth +20, Swim +17
Languages Aklo, Common
SQ amphibious, symbiosis
ECOLOGY
Environment temperate and warm oceans
Organization solitary, pair, or raft (3–12)
Treasure incidental
SPECIAL ABILITIES
Attach (Ex) The suckers on a stubby squid’s tentacles latch onto a target with surprising tenacity. The squid gains a +4 racial bonus on combat maneuver checks to maintain a grapple, and a +8 racial bonus to CMD against grapples.
Dehydrate (Ex) A stubby squid attached to a creature halves the amount of time (12 hours plus 1/2 Constitution score) the creature can go without water. Additionally, the DC for the Constitution check to avoid nonlethal damage from dehydration increases by +2 for each previous check.
Fast Healing (Ex) A stubby squid loses fast healing when it is out of salt water.
Mind Swap (Su) As a full-round action, a stubby squid can trade minds with a creature to which it is attached. This functions as magic jar, except the two minds trade bodies. An unwilling target can resist this ability with a DC 15 Will save. The mind swap lasts for 1d4 hours or when the squid ends the effect as a free action, whichever is sooner. If a creature saves against the effect, this particular stubby squid cannot attempt it again with the creature for 24 hours The save DC is Charisma-based.
Symbiosis (Ex) While a stubby squid is attached to a creature, the creature gains the spell resistance and acid resistance possessed by the squid. The creature cannot voluntarily lower the spell resistance. Likewise, the squid enjoys energy resistances and immunities possessed by the creature.

Stubby squids are not animals despite their outward appearance. Instead, they are intelligent lifeforms with alien minds. They indulge in their curiosity by attaching themselves to fast-moving oceanic creatures or obviously non-aquatic specimens. If they feel they have approached friendly creatures, they attempt to convince the creatures to carry them along. They otherwise just attach themselves to their targets and hope for the best. Regardless, they entice potential hosts with their conveyed protection from acid and spells, as well as the ability to breathe water (typical stubby squids can provide water breathing to a single creature for a full day). Squids with a positive symbiotic relationship inform their hosts of their need for water when they leave the sea and the potential for dehydration as they drain water from their hosts.

In aquatic environments, stubby squids work together peacefully. Outside their watery homes, they become extremely competitive over precious water resources. The squids are instinctively aware of other squids, even those hidden on a host’s body. The squids assert their intelligences over their hosts, sequestering their hosts’ minds away in their bodies, to engage in proxy battles. When their hosts die in these bizarre combats, the squids find the nearest available creatures to possess and continue their conflicts. Warring stubby squids wipe out settlements ill-equipped to handle them, typically with only one squid-hosting “survivor” remaining.