Went shopping this evening after the first day of school to replenish my depleted larder.  I ran across the above, BLAECORN UNIDRAGON Russian Imperial Stout (for clearer picture, see here).  At over twelve dollars for 1 & 3/8 pint, it's a little rich for my blood.  Anybody ever try it?

I picked up James Enge's Blood of Ambrose.  I remember it was getting a lot of great buzz a few years back when it came out, but there is something stubborn in me that resists new books in a way that I do not resist new movies.  So I know I'm late to the party, but so far, this book is a first rate piece of sword and sorcery -- well-written, attention grabbing and holding, interesting characters.  It seems that the good buzz was justified.  I'm pretty sure this is going to turn out to be a "Strongly Recommend."

When the hell did summer get so short and school years get so long?  Happy Mythopoeic Monday, all!
Posted by Theodric the Obscure at 8:39 PM

I have featured the work of Hugo "Butterfrog" Solis on my blog in the past, but as I have gotten busier, and at the same time tried to keep up with the doings of more and more creative folks, he too has gotten busier.  Little did I know that amongst his current projects, he had taken up turning his nom-de-net into a Pathfinder RPG creature.  Download your free guide to the freaky butterfrog, here.

Further, the guidebook serves as a guide to create more variant butterfrogs for PFRPG, with a chance to win prizes and glory.  To join in this madness, read more about the contest here.
Bon Frogage!
Posted by Theodric the Obscure at 4:56 PM

GM at the Improv

Well, another summer comes to an end in which I have done a lot less gaming than I had hoped to do.  The only place I even got to game was in some time away in Minnesota to see my daughter.  I ran Pathfinder a game for her and her boyfriend.  Now, I had come pretty much fresh off of the teaching the last summer session.  They wanted a full Pathfinder game we could play in about a three solid days, and I had not time to prepare.

I've recently been enjoying the Iron GM podcast (see below), and was inspired to hear about the contest's assigning of special ingredients that had to be worked into the adventure that the contestants ran and interviews with the winners and their methods.  An interview with Wolfgang Baur likewise brought up how he DMed using a Monster Manual, which brought back lots of memories of college gaming.  I realized that the twin demands of no time to prepare like I did while running Rise of the Runelords and giving the players what they wanted (and not helping them to chose something prepared and then preparing them to play something that fit what they chose) would best be met by improvisational game-mastering.  So with only the first PF Bestiary to draw from (though I did keep my stack of recent KQs and Book of Drakes at hand in case), I asked the two players to give me eight elements for the game.  Their contributions are below.

Now, the game had to be set somewhere, so I used the Ygg setting (see tabs above) as that is the setting I had been thinking about that didn't require an authority outside myself for "getting it right" and one of it's great cities: the trade hub of the North, Farlangora.  A quick look at the Wikipedia entry from pineapple got me thinking -- I wanted a culturally specific term for the fruit that did not come from their resemblance to pine cones.  Thinking about their exoticness and how difficult and expensive it would be to transport them in a pre-scientific fantasy world,I realized that in a world where pineapples were hard to get, they would be greatly coveted.  It's difficult to get my head into a world where I couldn't have pineapple just about any time I wanted it, and most people would have never tasted them.  This plus the "crown" on top inspired me to rename Yggian variety of pineapple, "kingfruit."

So I thought of an undercover fey contingent in Farlangora that would have their own black market.  Such a presence in the city would be lucrative (think the fair in Stardust or the Goblin Market in Rossetti or Hellboy II) and a point of trade between the mundane and fey.  Something difficult to get like a kingfruit could be greatly desired by the fey as well -- especially if their was something that was hungry for them.  Magic is keeping the green pineapples from spoiling, but also will be used to ripen the pineapples as they are sold.

The Beginning of the Adventure

The characters were a pygmy (halfling) druid, her friend a dwarf alchemist, a half-elf barbarian who worked as a bouncer a the Green Dragon (after having lost her job as a guard for one of the merchant houses -- charisma dump stat!), and a changeling fey-bloodline sorcerer, the supposed daughter of said merchant.  Alas, the daughter's family throws a party, and the key attraction, the kingsfruit, is delayed in arriving.  Thy pygmy was a freed slave and friend of the dwarf.  She worked at the Green Dragon Inn for room and board while waiting for the ship she had bought passage on to return to her home in the Lands of the Sun.  This was the same ship bringing eleven large crates of kingfruit for sale.  It wrecks on a beach below the town and is discovered with the kingfruit stolen and the captain missing the top of his head.  Thus the network of relations between the characters drew them into the situation to investigate.  While a crowd gathers on the beach at the wreck site, a group of skum charmed by a nixie appear to drag women off the beach to watery (eew!) nuptials.  This is just a ploy by the fey to draw suspicion onto resurgent skum activity.  This is where the heroes get their first fight.

Inspector Oxyscopos - the chief inspector of the Harbor Watch.  The characters think they are dealing with him, but they are really dealing with a doppelganger who is working with the fey to steal the kingfruit.  The doppelganger cleaves the skulls of his victims open, like Sylar.  The PCs later discover Oxyscopos body, which shows signs of having been dead for more than a day.

Gershon Thusacles - introduced as the obnoxious Maes Hughes-like character at party thrown by the changeling sorceress' father, presumably unimportant, but the characters later learn that he is an assistant inspector with the Harbor Watch who takes over the case of the stolen kingfruit once Oxyscopos disappears.

Baratos Silberhülsen - the head of one of the great merchant houses of Farlangen.  Owner of the ship that wrecks, he stands to lose a fortune if the kingfruit is not recovered.

Ginger - Baratos' floozie.   So far, only a minor character.

Larsy Herringbone - proprietor of the Clockwork Gnome (you're welcome, Allen).  You will note his name is an anagram for Sylar.  He wore red and like Sylar, worked on clocks and clockwork mechanisms.  When the characters entered The Clockwork Gnome and met him, he had the top of the head of a Brazen Head off of it while he worked on it.  Larsy was a red herring for the real Sylar-style killer.  The players were tormented when they thought that their characters had befriended, and even aided, Larsy when they later made the false connection.  Use meta-knowledge for player fun, even as you guide your players (mine didn't need much guidance here at all) not to confuse their suspicions with their characters'!

Heraclesson - proprietor of the Green Dragon Inn. So far, only a minor character

We had a good time this week and all their adventuring across the city got nowhere close to exhausting even the basic plot I had created on the fly, much less all the avenues their exploration and role-play opened up, and this reinforced for me how well improvisational GMing can go if you have good resources and a good imagination, and have kept your creative juices flowing even when you were not preparing to run a specific adventure.  My advice this Mythopoeic Monday is to get player input and go with it!  And if you haven't listened to the ENnie-nominated Iron GM podcast, click the link below and give it a try!

Email ThisBlogThis!Share to TwitterShare to FacebookShare to Pinterest
Labels: RPG

Grab four objects.  Arrange them together.  Suppose that they represent or even belong to a character.  Then flesh that character out.


As I was clearing the shelves in my old office/library for its next regular occupant, I took the four above objects, put them on the shelf together, and snapped the picture above.  Whether you take the picture and set it aside for the future, or put the objects in front of you and begin brainstorming, I like this exercise for either RPG characters (and PC or NPC!) or fiction characters, and am working on a Pathfinder character that seems a real natural choice for these objects.

Posted by Theodric the Obscure at 5:39 PM

Have Game, With Travel 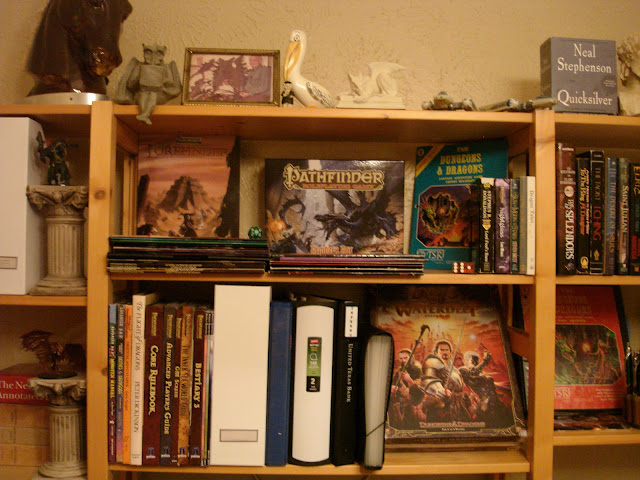 Ah, summertime.  As I write this, my summer is rapidly coming to an end.  I look back on the past three weeks (short summer, huh?), and the gaming gear and reading that I brought with me, along with some acquisitions I picked up during these weeks, and I realize I brought more than enough to keep me entertained.  I only wish I had another three weeks to spend with it and interested parties!  So before I pack it up, I thought I'd post a couple of pictures to share.  So, what are the essentials you have to take with you, or the cream and timely stuff you would take with if you had room, when going away for an extended time?  It's sharing time! 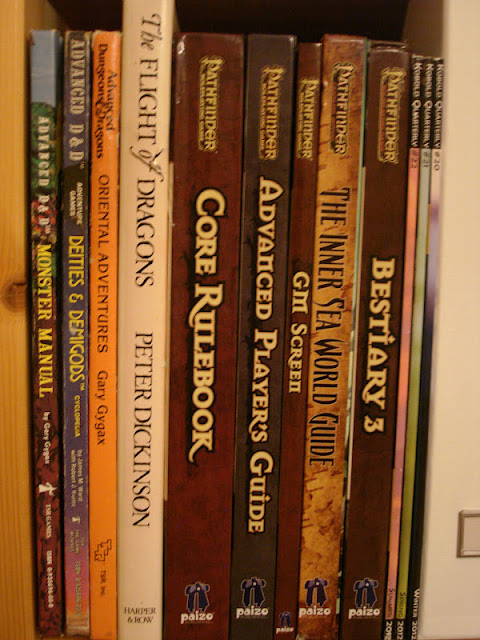 Posted by Theodric the Obscure at 11:24 AM