Hello again and welcome to a new Frightful Fridays! Real life intervened over the past couple of weeks, but I missed doing these, and my queue keeps growing. Craig found this one and it piqued my mashup sensibilities, so of course I had to stat it up. Bunyibbles are fine normally, but you don't want to see them when they're angry, and you certainly don't want to hurt one when others are lurking about.
I hope you enjoy the bunyibble, and I also hope to be back next week with a new monster. Hopefully, once things settle down with the day job and other commitments, I can work through the queue much more quickly. Thanks for reading! 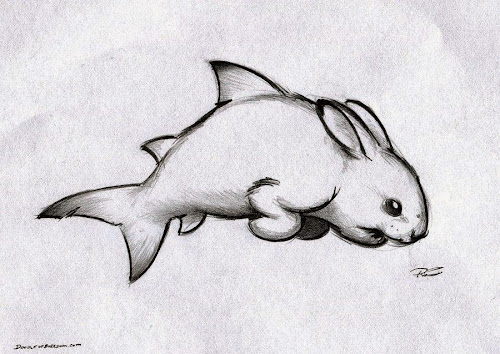 This truly delightful beast can be found here.

This creature looks like something fused the front half of a white-furred rabbit to the rear half of a shark; two rows of shark teeth line the inside of its mouth.
Bunyibble CR 1
XP 400
CN Small magical beast (aquatic)
Init +2; Senses darkvision 60 ft., keen scent 180 ft., low-light vision; Perception +9

Special Abilities
Blood Rage (Ex) If another bunyibble is injured within range of a bunyibble's keen scent, it flies into a rage. This ability otherwise works as normal.

Despite the bunyibble's fearsome features, the creature is actually fairly shy and attempts to stay hidden from larger creatures. Larger and more aggressive bunyips enjoy bunyibble flesh, as do sharks, prompting the smaller bunyibble to learn to hide from anything it considers a predator. However, once a creature injures a bunyibble, it goes into a frenzy (along with any nearby bunyibbles) and will not return to its normal, docile state until its attacker is dead. Many foolish hunters have met their demises after spearing a solitary bunyibble, only to come under attack by a dozen enraged shark-bunnies who turn the water red with their foes' blood.

Owing to its typical docility, a bunyibble can be taken as a familiar by a chaotic 7th-level spellcaster with the Improved Familiar feat. The spellcaster can choose to enter blood rage when her bunyibble familiar is injured, but she cannot end the rage voluntarily afterwards.

Posted with Blogsy
Posted by Mike Welham at 12:05 PM