The top six monsters in this year's Here Be Monsters contest have been revealed. The links are below. I've also included a link for the voting booth. Please consider voting for your favorite among the six finalists.

I had a tremendous time judging all the monsters, and it was great to see all the creativity on display!

If you don't know my hometown pal Richard LeBlanc of New Big Dragon, let me help you with that right now. For me, he is the undisputed king of the d30 and also one of a handful of people that make their own products that are not only professional, but pleasurable to look at.
(Let me be clear: his PRODUCTS.) ;-) 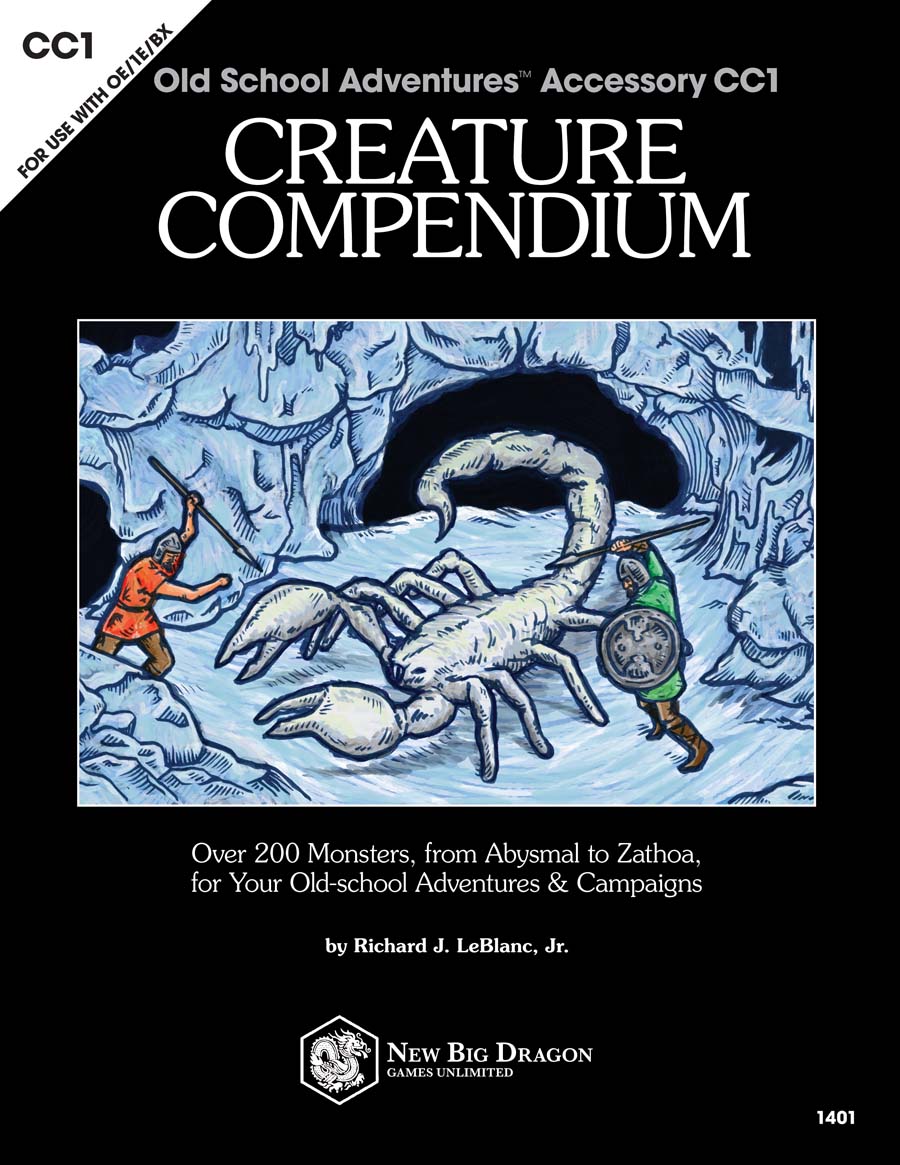 If you love monsters and Old School D&D, he has a great deal going on right now on OBS sites: ONE crispy electronic dollar for his Creature Compendium. Grab it and enjoy just reading about new monsters or even better surprising your players.
Posted by Dr. Obscure at 11:10 AM

Hello, and welcome back to another edition of Frightful Fridays! For once, the monster is actually out on a Friday (albeit a week late). I spent last weekend selecting my favorite monsters for this year's Here Be Monster's contest, and I'm looking forward to the reveal. We had a great selection of monsters to choose from.

This week's monster has been rooting around in my brain (sorry!) for a while, and I finally decided on the abilities to make this a fearsome monster. I occasionally return to the theme of nature turning on civilization (but not in a "The Happening" way), and a killer plant with an axe to grind against those who ravage nature is perfect for that theme.

I hope you like the flensing treant, and I'll be back hopefully tomorrow with the creepiest monster I've ever worked on. Thanks for reading! 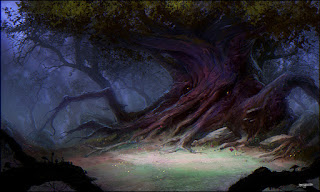 This decidedly unhappy tree can be found here


Angry red “eyes” glow from this twisted tree’s trunk, which also bleeds a black sap; its leaves rustle without wind, and its roots twitch.
Flensing Treant      CR 14
XP 38,400
NE Huge plant
Init –2; Senses low-light vision; Perception +32
DEFENSE
AC 30, touch 6, flat-footed 30 (–2 Dex, +24 natural, –2 size)
hp 210 (20d8+120)
Fort +18, Ref +4, Will +11
Defensive Abilities poison sap; DR 15/cold iron and slashing; Immune plant traits
Weaknesses vulnerable to fire
OFFENSE
Speed 30 ft.
Melee 2 slams +22 (3d6+8/19-20 plus tearing bark), 4 tentacles +17 (1d6+4 plus grab)
Ranged 2 leaves +15 (2d6+8 plus bleed)
Space 15 ft.; Reach 15 ft. (20 ft. with tentacles)
Special Attacks bleed (1d6), constrict (1d6+8), flensing leaves, trample (3d6+12, DC 28)
Spell-Like Abilities (CL 20th; concentration +24)
At will—entangle (DC 15)
1/day—plant growth, wall of thorns
STATISTICS
Str 27, Dex 6, Con 23, Int 16, Wis 21, Cha 18
Base Atk +15; CMB +25 (+27 bull rush and sunder, +29 grapple); CMD 33 (35 vs. bull rush and sunder, can't be tripped)
Feats Alertness, Awesome Blow, Critical Focus, Improved Bull Rush, Improved Critical (slam), Improved Sunder, Power Attack, Sundering StrikeAPG, Weapon Focus (slam), Weapon Focus (tentacle)
Skills Intimidate +24, Knowledge (nature) +22, Perception +32, Sense Motive +29, Stealth –3 (+17 Stealth in forests), Survival +22
Languages Common, Sylvan, Treant; treespeech
SQ animate trees, double damage against objects, of the forest
ECOLOGY
Environment any forest
Organization solitary or pair
Treasure double
SPECIAL ABILITIES
Animate Trees (Sp) A flensing treant can animate any trees within 360 feet at will, controlling up to four trees at a time. It takes 1 full round for a tree to uproot itself, after which it moves at a speed of 10 feet and fights as a flensing treant (although it has only one slam attack and lacks the treant's special abilities), gaining the flensing treant's vulnerability to fire. If the treant that animated it terminates the animation, moves out of range, or is incapacitated, the tree immediately takes root wherever it is and returns to its normal state.
Double Damage against Objects (Ex) A flensing treant or animated tree that makes a full attack against an object or structure deals double damage.
Flensing Leaves (Ex) Once every 1d4 rounds, a flensing treant can release of cloud of razor-sharp leaves that deal 4d6 points of slashing damage to creatures in a 30-foot radius (DC 26 Reflex half). A creature failing its Reflex save also takes 2d6 points of bleed damage.
A flensing treant’s thrown leaves have a 60-foot range increment, and the treant gains a +4 racial bonus on its attack rolls with the leaves.
Of the Forest (Su) When in a forest, a flensing treant cannot be caught flat-footed, and it always knows the location of invisible creatures. It still suffers the miss chance against creatures with concealment.
Poison Sap (Ex) If a creature adjacent to a flensing treant damages it with a slashing weapon, the treant sprays the creature with poisonous sap. Additionally, when the treant is caught in the area of an effect that deals fire damage, it aerosolizes its poison, affecting all creatures in a 30-foot radius.
Flensing treant poison—contact; save Fort DC 26; frequency 1/round for 8 rounds; effect 2d4 Dex; cure 2 consecutive saves.
Tearing Bark (Ex) If a flensing treant confirms a critical hit with its slam attack, it inflicts 1d4 points of Strength bleed.
Treespeech (Su) A flensing treant has the ability to converse with plants as if subject to a continual speak with plants spell, and most plants greet it with an attitude of friendly or helpful.

In darker groves bordering on unseelie fey realms or in forests ravaged by civilization, flensing treants sprout and thrive. Whether the treants made a deal with dark fey for their terrifying powers or they came into them through their own righteous anger, these creatures have the same suite of abilities. Their roots take on a life of their own, allowing them to grasp opponents and squeeze the life out of them. Their leaves harden and take on a razor edge, allowing them to fertilize their forests with the blood of their foes. Their black sap fills enemy pores and hardens, minimizing the chance for escape.

Flensing treants usually lurk in their forest homes, providing a false sense of security for those living near a forest claimed by the treants. When prey eventually refuses to come to them, they raise a coterie of trees and bring the fight to civilization they so hate. On rare occasions, when vengeance births a flensing treant, it reverts to a normal treant when its desire for revenge has been sated.

One more day to get your monsters in!

The submission deadline for Here Be Monsters 2 closes tomorrow at 5 PM EST. We've received a number of entries so far, but there is plenty of room for some excellent Hell-themed (or Hell-antagonizing) monsters!

Hello and welcome to this week's Frightful Fridays! OK, it's a little late this week thanks to some weekend work. I couldn't find a mashup of a horse and a panther in honor of the "big game," but I figured this little guy would work nicely instead. Jason pointed out the rosy maple moth, and its coloration reminded me somewhat of the giant mantis shrimp, so I drew some inspiration from that for the moth's bullet charge ability.

I hope you enjoy the impact moth, and I hope DMs can use it to punch some holes in PCs. Thanks for reading, and I'll see you again in the next week! 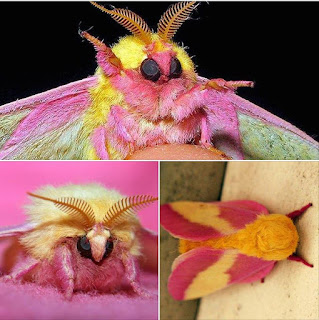 Impact moths, also known as bullet moths, have bright colors much like any other dangerous natural creature does to mark it as a threat, despite its otherwise dainty appearance. The moths build up kinetic energy when they fly and use that to puncture material and flesh alike. Telltale holes riddle trees in their forest homes.

Impact moths are omnivores, but they prefer eating fresh kills. Multiple moths work together to bring down larger creatures and feast on the remains afterwards. The kinetic energy they generate requires them to eat twice their two-pound bodyweight every day. Impact moths live for eight years and mated pairs produce up to a dozen larvae per year. The caterpillars are drab and have none of the moths’ kinetic abilities. They pupate after 2 months, during which they feed on high-energy grains and fruits, and emerge from their cocoons 1 month later.

Frightful Fridays! Plasma Fish (late because of the fish's shyness)

Hello, and welcome to another (late) edition of Frightful Fridays! He-Whose-Blog-I've-Have-Usurped posted this little guy up and demanded stats. I can't say no to Theodric the Obscure, but I got a little delayed by some freelance work.

I hope you enjoy this fire-spitting fish (in single adult and baby swarm varieties), and I'll see you on Friday with another monster. Thanks for reading!

Plasma fish are extremely shy and usually attempt to flee from larger creatures. However, if trapped, they unleash fire that works remarkably well underwater. Plasma fish eat bioluminescent plants that they combine with enzymes to produce an inert plasma within their bodies. When they spit it out, it catches fire and burns as well as if it were in air.

Plasma fish live for 5 years, during which they lay hundreds of eggs once a year. After fertilization, they gestate for 1 month. The young plasma fish congregate into a massive swarm that collectively avoids predators, which still manage to winnow the fish down to a manageable population.

A spellcaster who uses a gland from an adult plasma fish (requiring a DC 15 Heal or Survival check to remove intact) as a spell component for a spell with the fire descriptor can cast the spell underwater with no change to the spell.