Frightful Fridays! The Worst Monster Ever

Hello and welcome to another Frightful Fridays! This is one I've had on the back burner for a couple of months, but I couldn't bring myself to finish it. When I first experienced this horrific sight, I temporarily lost my arachnophobia and coulrophobia. Worse, this is something I witnessed along with several million people.

I hope you survive beholding this horrific monster. I'll be back next week with something more down-to-earth, like a giant polyp that shoots polyps that release spores infested with flesh-eating paramecia. Thanks for reading!

For fear of summoning Elder Gods because I included the image, here is a link to the disturbing video.


A fusion of monkey, baby, and puppy dances jerkily instead of walking. It jabbers its own name as its obscene pink tongue probes for exposed flesh.
Puppymonkeybaby      CR 4
XP 1,200
CE Small aberration
Init +8; Senses darkvision 60 ft.; Perception +1
DEFENSE
AC 17, touch 15, flat-footed 13 (+4 Dex, +2 natural, +1 size)
hp 37 (5d8+15)
Fort +4, Ref +7, Will +1
Defensive Abilities dancing dodge; Immune mind-affecting effects; SR 15
OFFENSE
Speed 30 ft., climb 10 ft.
Melee bite +8 (1d4), tongue +3 touch (befuddling lick)
Special Attacks babble, bewildering dance
ECOLOGY
Environment any land
Organization solitary, pair, or “dear <insert deity name>, why?” (3–12)
Treasure incidental (potions of dubious quality)
STATISTICS
Str 10, Dex 18, Con 16, Int 3, Wis 5, Cha 17
Base Atk +3; CMB +2; CMD 16
Feats Improved Initiative, Lightning Reflexes, Weapon Finesse
Skills Acrobatics +8, Climb +8, Escape Artist +8, Perception +1, Perform (dance) +9
SQ confusion grace
SPECIAL ABILITIES
Babble (Su) A puppymonkeybaby repeats its name continuously, battering its opponents’ mental defenses with its inanities. A creature within 60 feet of the puppymonkeybaby must succeed at a DC 15 Will save to avoid taking a –4 penalty on further Will saves against the puppymonkeybaby’s abilities. Regardless of the result, a creature cannot be affected by the same puppymonkeybaby’s babble for 24 hours. This is a mind-affecting, sonic effect; the save DC is Charisma-based.
Befuddling Lick (Su) If a puppymonkeybaby succeeds at a touch attack with its tongue, the target creature must succeed at a DC 15 Will save or become confused for 1d6+1 rounds. This is a mind-affecting effect, and the save DC is Charisma-based.
Bewildering Dance (Su) A puppymonkeybaby can perplex opponents by performing a twitching dance. All creatures within 30 feet that can see the puppymonkeybaby when it uses its bewildering dance must succeed on a DC 15 Will save or be fascinated for 2d6 rounds. This is a mind-affecting effect. The save DC is Charisma-based.
Once per day, a puppymonkeybaby can make a Perform (dance) check to set the save DC for this ability. The puppymonkeybaby must accept the result of the Perform check even if its lower than the normal save DC.
Confusion Grace (Su) If a puppymonkeybaby attacks a confused creature, the creature will not attack the puppymonkeybaby in return. Likewise, if a confused creature gets "attack nearest creature" as a result on its confusion roll, the creature ignores the puppymonkeybaby.
Dancing Dodge (Ex) As an immediate action on a successful attack against it, if a puppymonkeybaby is not flat-footed or immobilized, it can make a Perform (dance) check to replace its AC against that attack. The puppymonkeybaby must accept the result, even if it is worse that its current AC. The resulting AC still suffers any penalties incurred by the puppymonkeybaby against its AC.

The dread kraken, Ith’qa’lool’pon, decided the best way to defeat the two-legged land dwellers that vexed it was to create innocuous spies that its enemies would accept in their midst. The infiltrators would telepathically gather information about enemy strength, plans, and other vital intel, and they would transmit that information to the dread kraken. Ith’qa’lool’pon set his aboleth fleshcrafters to the task, so the devious creatures tore images of beloved creature from the minds of humanoids they had been torturing. The result was the puppymonkeybaby. Pleased with the abominable amalgams, the dread kraken set them loose.

The creatures were not successful at their intended task, since they could not actually read humanoid minds. However, they created such incomprehension and dismay among people, that several locations they infested fell to rioting as a result of their baffling natures. With resistance softened as a result of infighting, the dread kraken could send its shock troops to finish off what the puppymonkeybabies started. Areas that managed to drive off the creatures learned to shoot one on sight if it reappeared.

Fortunately, for the world at large, the formula for creating puppymonkeybabies self-immolated (yes, even underwater) after the aboleths created the first batch. Unfortunately, through some depraved process, puppymonkeybabies bred true and continue to assault people with their nonsensicality.

Hello, and welcome back to another edition of Frightful Fridays!, after much too long of a break. Theodric the Obscure received some wonderful news (which I won't share, because I am protecting his obscurity), so I'm celebrating with...an evil pig? Sure, why not?

I hope you enjoy this week's monster, and I hope to be back next week with something else. Thanks for your patience, and thanks for reading! 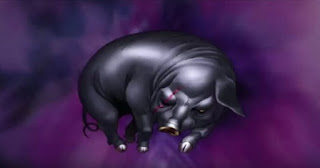 Frightful stories tell of one or more unnatural pigs running rampant through a large population center, and, merely by charging between the legs of their victims, destroying their souls and leaving shambling husks in their wake. These creatures are difficult to bring down for the average townsfolk who also have to deal with friends and family turning into zombies. While katakirauwa are not highly intelligent, they are clever enough to attack at night when their lack of shadows will not give them away. Katakirauwa also make an initial attack in an outlying area to create a small pack of zombies they then lure to a settlement, allowing them to prey on people in the chaos.

Katakirauwa spontaneously generate piglet versions of themselves after they destroy four souls, but their increased numbers generally reduce their overall threat. Uncooperative creatures among themselves, an overly large group of katakirauwa falls into disarray as individuals attack each other to prevent them from stealing souls.

Powerful undead creatures often “raise” a katakirauwa and use it to soften up resistance and to bolster its ranks of undead minions.