C is for Chesterton: A Colossus in Fairyland 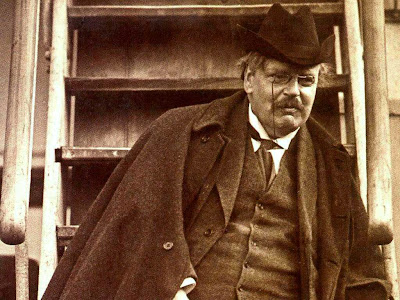 The popularity of Professor Tolkien has ensured that his ideas about Faerie, eucatastrophe, subcreation, and the "inner consistency of reality" that should characterize secondary acts of creation are spreading among world builders from novelists to gamers.  This is a development that can't happen with enough speed and intensity, as far as I am concerned.  But there is another theorist of Faerie that I would like to recommend: Gilbert Keith Chesterton.  There are areas were Chesterton may rub hard against many judgments of this age, but that he was a fan of George MacDonald and numbered C. S. Lewis and Tolkien among his fans should be enough to recommend him to our attention.  If he and George Bernard Shaw could put up with one another (they were close personal friends as well as public opponents), then there's something to be said for widening our circle of associations in this age of the tribalism of the like-minded. 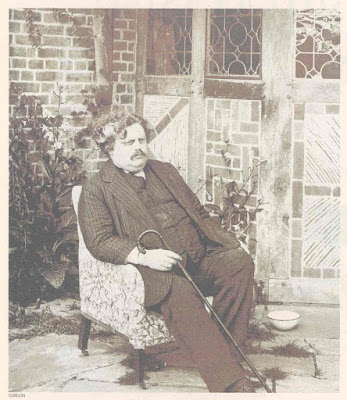 Chesterton (1874-1936) was a journalist, critic, novelist, poet, apologist--among other things--whose collected works in the Ignatius Press edition run to 36 volumes.  I am aware of two extended treatments of what Chesterton calls fairyland or elfland in his works, both originally published in 1908 and closely related: the essay "Fairy Tales" in All Things Considered and chapter IV, "The Ethics of Elfland" in Orthodoxy.  I would recommend reading them in this order, to digest the shorter treatment first.  Both works are in the public domain and readily available online.

In Chesterton's eyes, the terrible arbitrariness of the rules of Faerie mirror the apparent arbitrariness of the rules of the real world.  Instead of an utterly random realm of nonsensical, wild freedom, there is an ethical or moral principle at the heart of the nonsense and wildness.  From a Tolkienesque point of view, one might say that this is one of the points that governs the verisimilitude of fey worlds.  We may not understand why we mustn't eat the apple or dip our finger in the pool, but this hole in our understanding is itself important and not childish.  Chesterton seems more suggestive at this point to me than definitive, but what I tease out of him is this: 1. This lack of understanding adds to our sense of mystery and wonder and 2. It increases our sense that we are guests visiting in someone else's realm; that there is a will behind the law.  There is law in faerie, insists Chesterton, and that law is based on the principle that happiness depends on human choice and on not breaking the magical and mystical law that rules the place.

Clearly, this is not the last word on the matter, for Chesterton doesn't seem to have thought as much about the attraction, one might almost say the compulsion, to break the law in those stories; a phenomena that seems much more two-edged that Chesterton suggests.  Struggling with this aspect will, I presume, drive us to thinkers like Tolkien and Jung--and perhaps Augustine, who first gave it a name: felix culpa.  But this is likely because Chesterton was, in the final analysis, more interested in how our world is like Faerie than in understanding Faerie on its own terms--or perhaps in terms of our world.  I recommend him as a stimulant to thought and a tonic to the wit.  Reading him must at the very least improve one's prose.

Link:
A Chesterton page that is not pretty, but seems pretty useful.
Posted by Theodric the Obscure at 7:18 PM