Hello, and welcome back to another edition of Frightful Fridays! This week's monster is courtesy of a specific request from my friend Patrick, who wanted some undead creatures in the CR 8–10 range. First up is a galvanic warrior known as the blitzgeist. Its schtick is all about electricity, typically in lightning form, which it uses to blast its foes into oblivion. It can also heal itself with lightning and if it overcharges itself, it can dish out lightning bolts in, well, lightning fast manner.

I hope you like the blitzgeist, and I hope to keep up the weekly trend. Thanks for reading, and I'll see you next time with a new monster! 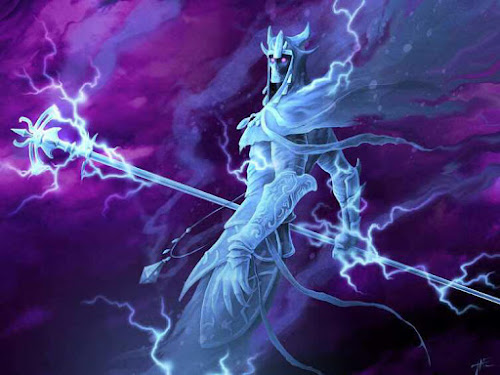 Lightning crackles along every surface of this ghostly warrior; its ghostly armor and massive weapon speak of the might it possessed in life.
Blitzgeist CR 10
XP 9,600
CE Medium undead (incorporeal)
Init +11; Senses darkvision 60 ft.; Perception +19

SPECIAL ABILITIES
Conductive (Su) A blitzgeist struck by a spell or effect that deals electricity damage gains temporary hit points equal to the dice of damage (or 1 point per 5 points of damage, if deals a flat amount of damage) dealt by the spell or effect. These temporary hit points last for 1 hour. If the blitzgeist has temporary hit points in excess of its maximum hit point total, it can deal 10 points of damage to itself to apply the Quicken Spell-Like feat to its lightning bolt spell-like ability.
A blitzgeist can redirect spells that deal electricity damage to target itself instead if it is within 60 feet of any point along which the effect travels. It must succeed at a dispel check (1d20 + blitzgeist's caster level; DC = 11 + spell's caster level) to redirect the spell. It automatically succeeds at redirecting its own spell-like abilities, but it gains only half the temporary hit points from them.
Electrical Discharge (Su) A creature that strikes a blitzgeist with a natural attack or metal melee weapon takes 5d6 points of electricity damage (DC 22 Reflex half). The save DC is Charisma-based.
Overwhelming Shock (Su) Whenever a creature takes electricity damage from a blitzgeist's, it must make a DC 22 Fortitude save to avoid being stunned by the supernatural galvanism for 1 round. The save DC is Charisma-based.

Blitzgeists were powerful warriors who believed themselves invincible, but the metallic armor they clad themselves in and the oversized metal weapons they wielded made them targets for the lightning that spelled their downfall. Rumors speak of particularly brazen warriors who challenged the gods and were repaid with a divine stroke of lightning. Whatever their origins, blitzgeists wander battlefields and haunt their former homes, where they invoke electrical destruction.

Blitzgeists see themselves as generals and field marshals for the undead, and they often surround themselves with armies of skeletons, zombies and more powerful undead. They prefer to send their minions to tackle the rank and file of living armies, while they seek out commanders whom they challenge to single combat.

Posted with Blogsy
Posted by Mike Welham at 3:07 PM