All we are saying...is give this post a chance 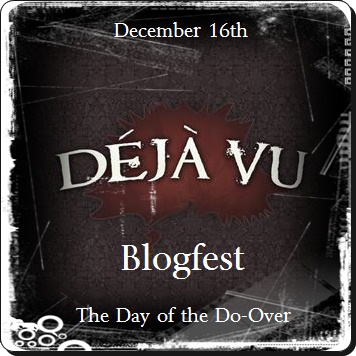 Ha-ha!  Welcome to my contribution to the Deja Vu Blogfest (flourish in Tim Brannan's direction).  If this is your first visit to my blog, it treats all sorts of topics mythopoetic, and especially gives vent to my desire to imagine materials for fantasy role-playing.  My Do-Over is a contribution to alternative rules for old school Dungeons and Dragons.

Below is my repost of the post that I feel didn't get the love it originally deserved.  Seriously, folks, Jeff Freakin Rients liked the post: it's right there in the comments.  The first comment.  The one above mine.  Me and Jeff, against the world.  Thanks for being that one person to download the rules document, even if it was a pity download.  (Please, Jeff, never tell me.)  Who knows, maybe I posted it on International Stay-off the Internet for Peace Day and I was just clueless.    In any event, here it is below.  If you skip it and your medium dies clutching his dry dagger to his breast after his one magic missile failed to save him, don't come crying to me: I tried.

Some folks, like myself, are not completely satisfied with the magic-user as it is written in classic versions of D&D -- especially as it is at lower levels.  Of course, if I want to play a radically different arcane class in a more complex version of the game, I can play, say, a Pathfinder wizard, sorcerer, summoner, witch, and so on, just to take one readily available route.  But I've been thinking about a more minor adjustment to the classical magic-user that would increase the class' reliance on magic at lower levels, and introduce a little more classic arcane flavor alongside the Vancian magic-user that would fit better in something like B/X or Swords & Wizardry.  I repeat, it's not out of a desire to do away with Vancian fire-and-forget, but a desire to add another layer to the way the magic-user works.

My idea is to add cantrips, which is relatively minor magic in the scheme of things since they are less powerful than first level spells.  Certainly this idea has a lineage in the game since Gary Gygax introduced them to AD&D in 1982 (Dragon Magazine #59).  Adding them would keep the low level magic-user magical, instead of an ineffective weapon wielder avoiding action beyond his single spell.  Further, they can be incorporated in a way that makes both the mechanics and the flavor of the magic-user more interesting.  I propose adding cantrips as spontaneous spells that are basically dependent on the magic-user having a personal wand.  Below is the table that I am currently playing with.


Of course, this does not address the issue of what cantrips are available.  Djeryv offers cantrips based on those from Dragon and Unearthed Arcana.  The more I look back, the more I think I might be happier with something closer to those available through the OGL.  I'll keep playing around with what cantrips I'd include as standardly available, and I'll probably report on that eventually.  One final note: the chance that a magic-user snatching up a random wand can use it successfully is the same as the chance that they have to learn a new spell (Holmes, 13).  It is represented above inversely as the chance for spell failure.

In a nutshell, this addition gives the magic-user additional magic that:

*New note: Check it, literati.  The wand as iconic equipment of the magically inclined wasn't an invention of J.K. Rowling.  (Not that I, for my part, haven't done my time at Harry Potter's Wizarding World, and wouldn't happily do so again.)
Posted by Theodric the Obscure at 6:00 AM