Hello and welcome back to Frightful Fridays! This image once again thanks to Flash, who pointed it out to me shortly after I started this feature 3 months ago. Sometimes it takes a while for inspiration to strike, but an idea started to form thanks to an image that Theodric called to my attention a couple of weeks ago (one I haven't featured yet). Here is the gullion, an intelligent aberration that likes to conceal the fact it can fly so it can launch a surprise attack against those it deceives.

I hope you like the gullion, and I'll be back next week with another Frightful Fridays! installment. 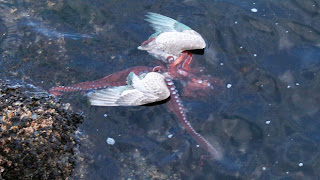 Image from this article

This octopus not only has fleshy wings,bird-like in appearance,allowing it to stay aloft, but it also has a wicked gleam of intelligence in its otherwise black, expressionless eyes.
Gullion CR 11
XP 12,800
CE Large aberration (aquatic)
Init +10; Senses darkvision 60 ft.; Perception +29

Special Abilities
Burning Ink (Ex) A gullion can emit a 10-foot-radius sphere of ink once every 1d4 rounds as a free action. This ink deals 8d6 fire damage to every creature within the sphere (DC 23 Reflex save for half). The ink also provides total concealment in water, and persists for 4 rounds (only dealing the fire damage once).
Surprise Flyer (Ex) A gullion attempts to conceal its wings from its opponents, hoping to lure them into a false sense of security. Once per combat encounter, it may attempt a Bluff check, opposed by a foe’s Sense Motive check. A character who previously encountered a gullion, or one who succeeds at a C 26 Knowledge (dungeoneering) check, gains a +4 circumstance bonus to his Sense Motive check. If it succeeds, it can take a full-round action to make a single tentacle attack against the flat-footed AC of a foe within range of its fly speed. Additionally, Bluff counts as a class skill for a gullion.

Created by dread krakens millennia ago, gullions delight in fooling victims who believe being shipboard or land-bound protects them from obviously aquatic creatures. This vile creature measures 14 feet in length (including its massive tentacles) and weighs one ton.

While a gullion is subservient to its dread kraken creators, it still has a great deal of autonomy and always enjoys the missions it executes for its masters. These missions usually involve the disruption of shipping lanes and other mayhem against waterborne humanoids, ultimately to coerce those humanoids to provide tribute—in the form of treasure or sacrifices—to the gullion’s masters. Oftentimes, a gullion oversteps the parameters of its mission and ends up slaughtering the ship’s crew or scuttling the ship. No one knows what sort of punishment, if any, a dread kraken doles out to an overenthusiastic gullion.

Dread krakens provided gullions with the ability to procreate naturally, but the gullions’ subservience passes on to their offspring. One of the creatures kills a large marine creature and deposits two to four eggs in the corpse, and another gullion fertilizes the eggs, which become live gullions in a year’s time. An average gullion specimen lives for close to 200 years and rarely has to worry about any natural predators.
Posted by Mike Welham at 5:00 PM