Hey there! Unbelievably, Frightful Fridays! has managed to work its way back to a Friday. PaizoCon is to blame for this phenomenon, but I hope to get things back on track in subsequent weeks. This week's monster is the blattraupe, inspired by a finding by Theodric the Obscure himself. This caterpillar is both pro- and anti-nature, depending on how it's deployed.

I hope you enjoy the blattraupe, and I'll see you again with another monster. Thanks for reading! 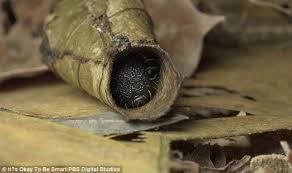 You can read about this neat caterpillar here

A blattraupe is a woodland menace, and trees riddled with perfectly round holes mark its territory. Since the caterpillar is somewhat intelligent, it manages its lair to prevent absolute destruction of the trees supporting it. Fortunately for the creature, its poisonous bite causes victims to petrify into wooden effigies, and it can feast on such victims at its leisure. Because the blattraupe devours petrified victims entirely, very little persists to warn travelers about the dangers of blattraupen-infested woods. Worse, the creatures silently wriggle their way onto wagons and into backpacks to relocate to settlements where they can find wood aplenty. It takes very little time for a blattraupe to inflict terrible damage to structures, often toppling them as the creature indulges its gluttonous appetite at the base of such buildings.

Malicious druids and those opposed to nature employ blattraupen; the former to create life-like wooden statues to adorn their homes, and the latter to destroy forests and flush out prey. While blattraupen are reticent to destroy trees, it is possible to coerce them into it—usually by starving them.

A 7th-level neutral spellcaster with the Improved Familiar feat and the wild empathy class feature can gain a blattraupe as a familiar. While the creature serves as a familiar, the spellcaster gains a +1 natural armor bonus.
Posted by Mike Welham at 6:00 PM