Hello and welcome back for another Frightful Fridays! Today's monster is the lowest-CR monster I've worked on for Frightful Fridays! However, that doesn't mean it's a pushover, especially in large numbers. Sure, on land, the dihydrogen monoxide swarm needs an external force to actually be effective, but, in water, it can be quite deadly.

I hope you enjoy the dihydrogen monoxide swarm, and I'll see you next week with another monster! 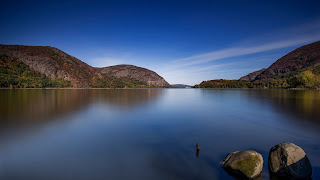 Can you find all the swarms in this image?


This densely packed swarm is translucent but presents a mirrorlike surface from certain angles.
Dihydrogen Monoxide Swarm      CR 1/8
XP 50
N Fine construct (swarm)
Init –5; Senses darkvision 60 ft., low-light vision; Perception –5
DEFENSE
AC 13, touch 13, flat-footed 13 (–5 Dex, +8 size)
hp 5 (1d10)
Fort +0, Ref –5, Will –5
Defensive Abilities swarm traits; Immune construct traits, acid, cold, electricity
Weaknesses vulnerability to fire
OFFENSE
Speed 0 ft.; immobile
Melee swarm (1 plus choking hazard and distraction)
Space 10 ft.; Reach 0 ft.
Special Attacks distraction (DC 10), drown, flame killer, inexorability, scalding retribution
STATISTICS
Str 1, Dex 1, Con —, Int —, Wis 1, Cha 2
Base Atk +1; CMB —; CMD —
SQ camouflage
ECOLOGY
Environment any
Organization solitary or collective (2–10,000)
Treasure incidental
SPECIAL ABILITIES
Camouflage (Ex) Since a dihydrogen monoxide swarm looks like ordinary water when at rest, a successful DC 10 Perception check is required to notice it before it attacks for the first time. Anyone with ranks in Survival, Knowledge (nature), or Craft (alchemy) can use any of those skills instead of Perception to notice the swarm.
Choking Hazard (Ex) If a dihydrogen monoxide swarm enters a square with a creature that needs to breathe, the creature must succeed at a DC 5 Reflex save or become sickened for 1d4 rounds.
Drown (Ex) A creature caught in a dihydrogen monoxide swarm for consecutive rounds is at risk for drowning.
Flame Killer (Ex) While a dihydrogen monoxide swarm takes extra damage from magical and alchemical fire that affects an area, it can affect nonmagical sources of flame. If it enters a square with an unprotected, nonmagical fire, the fire must succeed on a DC 5 Reflex save or be extinguished.
Immobile (Ex) A dihydrogen monoxide swarm requires another creature to act on it for it to move. If placed in a container, the swarm can be thrown with a 20-foot range increment. Alternatively, the swarm can hide among a downpour and as it falls; the swarm takes no falling damage from this.
Inexorability (Ex) While at rest, a dihydrogen monoxide swarm still deals 1d6 points of damage per year to creatures or objects in constant contact with the swarm. This damage bypasses hardness.
Scalding Retribution (Ex) If a dihydrogen monoxide swarm dies by taking fire damage, it transforms into a gas dihydrogen monoxide swarm for 1 round. It immediately deals 1d6 points of fire damage to creatures in its space, and deals 1d6 points of fire damage to creatures entering its space. At the end of its next turn it dissipates.

Sometimes the scariest monsters are those that seem the most innocuous. Such is the case with dihydrogen monoxide swarms, which appear to the untrained eye as nothing more than typical water. In fact, the creatures often lay in wait for unsuspecting prey to submerge themselves into water containing them, where they can strike and infiltrate their targets’ lungs. Even more terrifying, dihydrogen monoxide swarms left unattended devastate flesh and objects over time.

As they are usually immobile (except in rare occasions when they attack from the sky), they must rely on allies to generate their devastating attacks. They are often befriended by aquatic creatures and elementals from the Plane of Water. The swarms have no concept of the world around them and are content to remain inert, provided they stay out of heat sources for prolonged periods.

Variant Dihydrogen Monoxide Swarms
The most typical encounter with dihydrogen monoxide swarms occurs with the creatures in liquid form. However, they can assume a solid shape in extreme cold conditions and a gaseous form in extreme heat.