Hey there! It's Friday, so it's time for another monster. Today's monster is a little goofier than usual (I know, the bar is already pretty low), but I think I managed to make it a viable opponent for low-level PCs. You can be the judge!

I hope you enjoy the eggsemplar, and I'll see you next Friday. Thanks for reading! 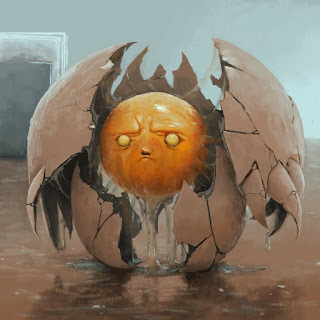 A cracked armor-like shell surrounds this orange sphere etched with sketchy facial features.
Eggsemplar      CR 4
XP 1,200
LN Small monstrous humanoid
Init +2; Senses blindsight 60 ft., darkvision 60 ft.; Perception +11
DEFENSE
AC 17, touch 13, flat-footed 15 (+2 Dex, +4 natural, +1 size)
hp 42 (5d10+15)
Fort +6, Ref +6, Will +7
Defensive Abilities fried by fire, shell up; Immune acid
OFFENSE
Speed 30 ft.
Melee 2 claws +9 (1d6+3)
Special Attacks walk on egg shells, yolk's on you
STATISTICS
Str 17, Dex 14, Con 17, Int 11, Wis 16, Cha 12
Base Atk +5; CMB +7; CMD 19
Feats Antagonize[UM], Great Fortitude, Power Attack
Skills Acrobatics +7, Intimidate +9, Perception +11, Profession (cook) +8
ECOLOGY
Environment any land
Organization solitary, pair, carton (3–12), omelite squad (13–30)
Treasure eggsidental
SPECIAL ABILITIES
Fried by Fire (Ex) An eggsemplar takes 50% more damage from fire, as if it had vulnerability to fire, but only from the first source of fire damage. Afterwards, it gains immunity to fire and a +2 natural armor bonus to AC. It reverts to its normal form in 24 hours.
Shell up (Ex) As a move action, an eggsemplar can close its shell armor around itself. It is effectively blinded when it does so and it loses its claw attacks and its yolk’s on you ability. In return, it gains a +2 natural armor bonus to AC, and it gains a slam attack which deals 2d4 points of damage (modified by 1–1/2 times its Strength modifier). It can open its shell armor as a move action, reverting to its typical statistics.
Walk on Egg Shells (Ex) As a standard action, an eggsemplar can shed some of its shell armor, reducing its natural armor bonus to AC by 2. When it uses this ability, all squares within 5 feet of it are treated as if covered by caltrops. The eggsemplar is unaffected by caltrops it creates with this ability.
Yolk's on You (Ex) This is similar to a breath weapon (15-ft. cone, 3d6 acid damage, Reflex DC 15 for half, usable every 1d4+ rounds), and creatures that fail their Reflex saves are covered in sticky, acidic residue. They become entangled and take an additional 1d6 points of acid damage at the beginning of the eggsemplar’s next turn. Removing the entangled condition requires an application of 1 gallon of alcohol.

Eggsemplars belong to a crack warrior caste among a species of otherwise shy and fragile ovoids. While they have considerable combat might, they refuse to take on a overlord role with their more peaceful cousins. To avoid the temptation, they spend much of their time travelling and working to protect the sanctity of their homelands from afar. They take their roles as warriors seriously and prefer combats which are not over easy. During their downtime, however, they like to crack each other up with jokes most outsiders would find unpalatable. When one of their number turns rotten, they reluctantly put the bad egg down and try to commemorate the excellent service provided by their fallen comrade.

Like the rest of their species, they worship a being they refer to as the Great Hen, and hope they prove themselves enough to ascend beyond the Great Wall, from which many notables have taken great falls. They are not theologians, so they refuse to consider questions about the origins of the Great Hen.

A typical eggsemplar stands just over 3 feet tall and weighs 50 pounds. They have 60 year lifespans, but their aggressive outlooks shorten this longevity.