Hello and welcome back for another installment of Frightful Fridays! This week you're getting leshys, because everyone needs more leshys. You can put these in your Yuletide-themed games or pretty much anywhere else where you've got a forest. Go crazy!

I hope you enjoy these leshys, and I'll see you next week with something else. Thanks for reading! 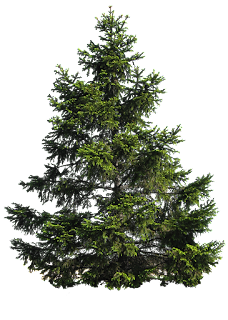 Holly leshys have a dichotomous nature, acting as a bloodthirsty warrior and simultaneously as a caring healer. Among plants and creatures they are sworn to protect, the leshys are generally kind and helpful, but they have short tempers and often storm off in a huff when something bothers them. This lasts for a few minutes before they return, very apologetic for the outburst. When something threatens their home, though, they fly into action and slice up their opponents, giving them no quarter. This ferociousness makes it difficult for allies other than holly leshys to get the leshys to leave survivors. This also makes it difficult for them to remain still and wait for enemies to approach so they can attack them with the element of surprise. Holly leshy impetuousness sometimes exasperates lotus leshys with which they share homes.

A typical holly leshy grows to 2 feet in height and weighs 15 pounds.

Pine leshys are one of the largest known species of leshy, but they are typically gentle giants. They can thrive in almost any environment, but they prefer colder climates where they can provide protection to less adaptable plants and animals. They are slow to provoke to anger, but antagonizing them to that point unleashes a series of unrelenting nettle-filled smacks. If they aren’t incited to attack, they attempt to defuse a combat by grabbing hold of the most troublesome participant or interposing themselves between opponents.

During downtime, pine leshys are very kind and spend much of their time listening to other plants’ concerns. The leshys offer warm embraces to creatures which accept them and suggestions for issues regarding those they view as friends. Pine leshys often travel to humanoid settlements to extend friendship and take care of the plants and animals living there.

Growing a Pine Leshy
A pine leshy grows best among other conifers. It must be coated in fresh pine needles to ensure its growth.
Pine Leshy
CL 14th Price 12,000 gp
RITUAL