Hello and welcome back to another installment of Frightful Fridays! I know I gave you plants last week, but the forest linnorm is on the opposite end of the power scale, plus it's technically a dragon. I thought it would be fun to design a less overtly threatening linnorm, but it will react to threats just as nastily as any of its obviously evil cousins.

I hope you enjoy the forest linnorm. See you next week with another monster! 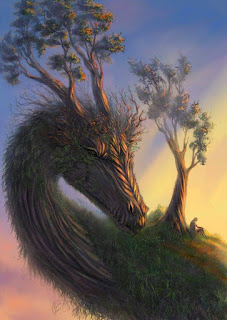 It's treesed to meet you!

Forest linnorms are a species of so-called southern linnorms, which are decidedly less harsh than their cousins to the north in reflection of the gentler nature of their territory. This does not mean forest linnorms are immediately friendly to trespassers, but they generally prefer to converse before attacking. However, creatures that harm the forest the linnorms call home receive their immediate wrath. The draconic creatures provide homes to animals, a variety of plants (sentient and non-sentient), and fey. When at rest, forest linnorms look like a copse of trees and incidentally provide shade and shelter for visitors to their sizable mass. Provided these visitors do no harm to the trees making up the linnorm’s body, it is possible the visitors may never realize they encountered a living creature. Forest linnorms shed seeds from the trees comprising their bodies to regrow forests which have been devastated by natural catastrophes or destruction wrought by humanoids.