Hello and welcome to the final 2017 Frightful Fridays! I'm going out with a bang with the fireworks golem, which is made of fireworks and shoots fireworks. You might say it has a certain shtick.

I hope you enjoy the fireworks golem, and your 2018 starts off great! Thanks for reading.

I also invite you to check out my Patreon to help support the creation of these monsters. 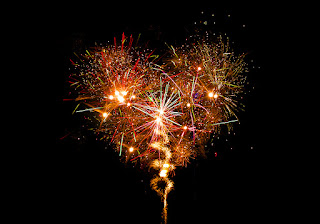 
This collection of fireworks is shaped into a vaguely humanoid form. Sparks shoot randomly from the creature’s body, and a stray firework shoots from the mass at random intervals.
Fireworks Golem      CR 4
XP 1,200
N Medium construct
Init +2; Senses darkvision 60 ft., low-light vision; Perception +0
DEFENSE
AC 17, touch 13, flat-footed 14 (+2 Dex, +1 dodge, +4 natural)
hp 47 (5d10+20)
Fort +1, Ref +3, Will +1
DR 5/adamantine; Immune construct traits, fire, magic
OFFENSE
Speed 30 ft.
Melee 2 slams +8 (1d6+3 plus 1d4 fire and bright light/loud bang)
Ranged firework +7 (1d4+3 plus 1d4 fire and bright light/loud bang)
Special Attacks fireworks explosion
Spell-Like Abilities (CL 5th; concentration +5)
At will—spark[APG] (DC 10)
3/day—snapdragon fireworks[UM] (DC 11)
1/day—pyrotechnics (fireworks effect only, DC 12)
STATISTICS
Str 17, Dex 14, Con —, Int —, Wis 11, Cha 11
Base Atk +5; CMB +8; CMD 21
Feats Dodge[B]
ECOLOGY
Environment any land
Organization solitary or display (2–6)
Treasure incidental
SPECIAL ABILITIES
Bright Light/Loud Bang (Ex) When a fireworks golem hits an opponent with its slam or firework attack, the foe must succeed on a DC 14 Fortitude save or become blind and deaf for 1 round. The save DC is Constitution-based and Includes a +2 racial bonus.
Firework (Ex) A fireworks golem’s firework attack has a range of 60 feet with no range increment.
Fireworks Explosion (Ex) If a fireworks golem is subject to at least 10 points of fire damage or if it is destroyed, it sets off dozens of fireworks. All creatures within a 20-foot burst take 2d4 points of bludgeoning damage and 2d4 points of fire damage; a DC 14 Reflex save halves the damage. On a failed Reflex save, a creature is blind and deaf for 1d4 rounds. The save DC is Constitution-based and Includes a +2 racial bonus.
A fireworks golem that is still alive after its fireworks explosion ability is triggered cannot use its spell-like abilities and its attacks don’t deal fire damage or inflict its bright light/loud bang ability. This condition persists for 1d4+1 rounds.
Immunity to Magic (Ex) A fireworks golem is immune to any spell or spell-like ability that allows spell resistance, with the exception of spells and spell-like abilities that have the cold descriptor, which affect it normally. In addition, certain spells and effects function differently against the creature, as noted below.
·       A magical attack that deals cold damage or produces water in the fireworks golem’s space slows it (as the slow spell) for 2d4 rounds, with no saving throw.
·       A magical attack that deals electricity damage breaks any slow effect on the golem and heals 1 point of damage for every 3 points of damage the attack would otherwise deal. If the amount of healing would cause the golem to exceed its full normal hit points, it gains any excess as temporary hit points. A fireworks golem gets no saving throw against electricity effects.

Fireworks golems are automatons formed from fireworks and configured to look like a humanoid. Oftentimes, sparklers and other long-lasting fireworks form its eyes and its mouth. They shoot fireworks from their mass to defend themselves and have a limited suite of spell-like abilities based on their modestly explosive properties. Most of these golems are programmed to begin combat by using snapdragon fireworks and exhausting the fireworks from that spell-like ability while making single ranged or melee attacks. On occasion, wizards controlling fireworks golems will subject them to fireball (from a safe distance) to create a fantastic display.

Construction
A fireworks golem’s body must be constructed using fireworks worth 400 gp.