Hello and welcome back to Frightful Fridays! which returns to delightfully creepy vermin for this week's entry. The bathynomus giganteus is just an oversized isopod, much like if your typical pillbug or wood louse went on a stroll through radioactive waste before visiting. The real world creature lives underwater, but that shouldn't stop the fantasy version from having fun above the sea. This monster also has the added bonus of attaching itself to a character before disgorging flesh-melting acid on the character.

Today's extra comes from the imagined acid bladders that float around within the creature's carapace--bladders the characters could potentially benefit from, if they survive.

Thanks for reading this week's Frightful Fridays! entry, and I'll be back next week with yet another monster. In the meantime, check out Flash's cool new shield item on Sunday, and maybe we can get a post from Theodric himself. 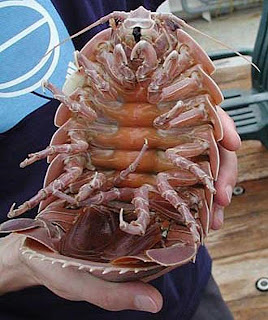 Environment
Ecology any temperate or warm coastline or ocean
Organization solitary, pair, or dissolution (3–12)
Treasure none

Special Abilities
Acid Spit (Ex) Once every 1d3 rounds, an acid bathynomus spits a 15-foot line of acid. Any target in the line takes 2d4 points of acid damage (DC 17 Reflex save for half). The save DC is Constitution-based.
Attach (Ex) If an acid bathynomus hits a single opponent with at least two of its claws, it can latch on to that opponent. While the bathynomus remains attached it automatically deals damage with 2 claw attacks, and it adds 4 to the Reflex save DC to avoid its acid spit.

Content to traverse its underwater environment and hunt prey there, an acid bathynomus sometimes arrives on land because it has run out of food, or thanks to an unfortunate fisherman who snags the creature a net. The creature makes its home just as well along the shore of its former home and continues to hunt prey using the same flesh-dissolving technique it uses underwater. An acid bathynomus measures 3 feet in length and weighs 40 pounds.

The bathynomus is a prodigious leaper and usually aims for its opponent's torso or head, where it latches on with at least on pair of its barbed legs. A number of bladders hold enzymes that the creature uses to convert seawater into a caustic acid. Fortunately for the bathynomus, its shell is utterly resistant to acid, so the messy stream of acid that it fires at its opponents does not harm the creature. An acid bathynomus prefers to grasp a victim before the creature spits acid at it, since the bathynomus's victim has less chance to avoid the acid striking it. Once it has dissolved its prey into sludge, it feeds; its mandibles are somewhat weak, but, if necessary, it can use them to tear into prey that proves resilient to its acid.

A typical acid bathynomus lives for 20 years and produces a number of young during it relatively short life, many of which do not survive the harsh underwater realm. Rumors persist regarding a giant version of an acid bathynomus as large as a full-grown elephant, but no such creature has surfaced.

Acid Bathynomus Bladder
By careful extraction (requiring a DC 25 Knowledge (nature) check followed by a DC 20 Heal check), a character may procure at least one bathynomus bladder from the creature's corpse (1 + 1 for every 5 points by which the Heal check exceeds the DC). Ten minutes after a character fills a bladder with 2 quarts of seawater, the bladder creatures 4 "doses" of acid. A character can squirt one dose of the acid from the bladder in a 10-foot line, dealing 2d4 points of acid damage to each target in the line (DC 15 Reflex save for half). Alternately, a character can throw the bladder as a splash weapon, which deals 1d6 points of acid damage per remaining dose (1 point per remaining dose splash damage). The enzymes in the bladder will only work once, but they remain active for a week after the bathynomus's death.