Welcome back to Frightful Fridays! Today's monster features a return to spider-related mashups which occur here with a disturbing frequency. While this creature was originally slated to appear in the A-Z challenge, it got bumped for the street kaida and then last week for vorpal bunnies. Still it was too creepy/cute to completely disregard, so here it is now. Spider "squirrel" is a misnomer, but it flows better than spider "chipmunk," so consider the stripes to be warning markings on some weird, mutant squirrel.

Today's extra takes the mashup concept further to combine acorns and webbing in an explosive mix represented by a druid/ranger spell.

Thanks for reading today's Frightful Fridays! I'll be back next week with a creature that co-opts the name of a country's currency. Also, while you're waiting for that, please check out Flash's new shield on Sunday! 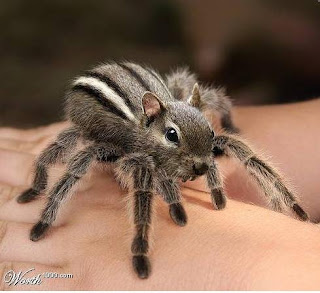 Combining a squirrel's frenetic and a spider's aggressiveness, the spider squirrel is a terror in any woods it inhabits. Fortunately, for a forest's denizens, a spider squirrel is actually omnivorous and spends more time gathering nuts and berries and storing them in web sacs than hunting other creatures. If this were not the case, a single spider squirrel would quickly depopulate its habitat. A typical specimen measures 1 foot in length and weighs 15 pounds.

Presumed to be a creation of some mad wizard, a spider squirrel actually seems to be an organism accidentally resulting from a pocket of wild magic encroaching on a forested area. At least no one has discovered notes on a spider squirrel's creation scrawled by an insane progenitor, unlike the copious notes discovered regarding the owlbear and spiderbear. Whatever their origin, spider squirrels breed true, and a thriving population of the creatures exists in hidden forest pockets. While a spider squirrel rarely hunts other creatures, it is extremely aggressive in protecting its territory and will attack creatures as large as a grizzly bear in an attempt to drive them off. Of course, animals and vermin that blunder into a spider squirrel web become fodder for the creature, but its web is only strong enough for smaller specimens.

A spellcaster can choose a spider squirrel as a familiar. The spellcaster must be at least caster level 7th and have the Improved Familiar feat. Additionally, and owing to their strange insertion into the natural order, a spider squirrel can be summoned with summon nature's ally III (or more powerful versions).

When you cast this spell, you transform a group of 2–5 ordinary acorns into a tiny web-filled bomb. When thrown, the acorn explodes in a sticky mass of webs, which grapples all creatures in a 10-foot-radius spread (a successful Reflex save avoids the grappled condition). These webs persist for 1 minute per caster level, but a grappled target may break free of them with a successful Escape Artist check or combat maneuver check as a standard action (DC equal to the spell's DC). Likewise, a creature moving through the webs must make the same check as part of the move action; failure means the creature becomes grappled in the first square of webbing it enters.