Welcome to the first Frightful Fridays! of May. I intended to post the only monster that fell out of my original April lineup (to make room for the street kaida), but Gregg posted a picture today that commanded my attention. The bunnies pictured below are vorpal rabbits, and they are still having trouble taking down that T-Rex. With a lucky hit by one of these cute bunnies, that T-Rex will lose its head, though.

Today's extra is, well, another monster. Since mine is the nth iteration of the vorpal rabbit, I figured I'd give you something else along the same lines but hopefully quite different: the razorwire porcupine.

I hope you enjoy these nasty little animals with their nasty, big, pointy teeth and nasty, big, stabby quills. Come back on Sunday for Flash's new shields, and I'll see you next week. Thanks for reading! 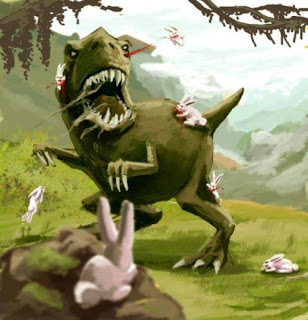 Special Abilities
Vorpal Bite (Ex) When a vorpal rabbit confirms a critical hit with its bite attack, its target must succeed at a DC 19 Fortitude save; failure means the rabbit severs the target’s head from its body. A target that succeeds at the saving throw still takes quadruple damage from the critical hit. The save DC is Constitution-based.

In a world where fearsome predators roam freely, the small creatures that regularly fall prey to these eating machines develop mechanisms that help them to flee or hide from these menaces. Occasionally, though, the hunted evolves in such a way that it becomes the hunter; such is the case with a vorpal rabbit, which has razor-sharp teeth capable of removing its foe’s head. Woe betide the hunter that mistakes a vorpal rabbit for a typical rabbit. Other than the indication that the creature’s teeth are much sharper than expected, a vorpal rabbit has the same outward characteristics as a regular rabbit.

Another strong indicator that one confronts a vorpal rabbit is the fact that the creature sits placidly when other creatures approach, rather than scampering off in fear. Since a vorpal rabbit is as much a carnivore as those that mistakenly hunt it, it patiently waits for its prey to make its first move. Once the surprised target is gored to death or decapitated, the vorpal rabbit devours its flesh, stripping the corpse to bone in a matter of two hours.

Druids and rangers aware of a vorpal rabbit’s presence give the creature a wide berth, but they make sure to have charm animal or similar spells prepared just in case the rabbit decides to go wandering. In fact, many druids and rangers place items they do not wish to fall into others’ hands in a vorpal rabbit’s lair, usually sneaking by while the rabbit is murdering some other creature.

A vorpal rabbit cannot be taken as a familiar or animal companion, but one can be summoned using summon nature’s ally VI.

This porcupine stands amid a field of mangled corpses that look like something took a scourge of razors to their flesh.
Razorwire Porcupine CR 6
XP 2,400
N Tiny Animal
Init +6; Senses low-light vision; Perception +16

Sometimes an animal already has a defense mechanism built in to deter predators, but every now and again, that defense mechanism needs bolstering to scare of the most determined creatures. A razorwire porcupine’s quills have developed into deadly slashing weapons that cause vicious wounds when they strike. A razorwire porcupine looks nearly identical to a typical porcupine with the exception of its quills, which are thinner and less stiff.

A razorwire porcupine cannot be taken as a familiar or an animal companion, but it can be summoned with summon nature’s ally IV.