Welcome back to Frightful Fridays! featuring one of the more esoteric dragons I've ever created. I realized I had given most of the classes a kaida that augmented their abilities, with the exception of divine spellcasters. So, the deific kaida starts off its life as an "untainted" manifestation of divine energy (represented by its access to the Divine subdomain), but it seeks out creatures that worship deities or have a strong philosophy and bonds with those items to achieve a greater understanding of the divine. By playing around with energy channeling or domain accesses, this kaida is useful for clerics, inquisitors, and many other divine characters (however, not for oracles; their kaida will have to wait for another time).

The extra ties in with some of the deific kaida's abilities and allows characters with access to domains to benefit from an additional domain.

That's it for this week. I'll be at ConCarolinas this weekend, where I'll be running a game in which the characters are drakes, which is what put me in the mood to work on another kaida. While you're waiting for next week's monster, Flash will have a new shield feature for you on Sunday. Thanks for reading and have a great weekend! 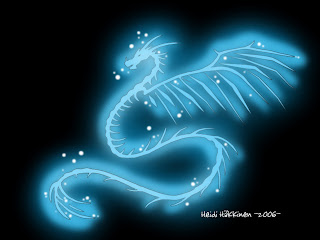 A deific kaida embodies divine energy in all its forms and coalesces into specific divine energy as it encounters other beings. Holy or unholy symbols, weapons favored by deities, and other divinely touched items attract a deific kaida, which seeks to bond with an item to gain greater knowledge of deities or philosophies. As a being primarily composed of energy, the 2 foot long kaida only weighs 5 pounds.

An "unspoiled" deific kaida starts off with access to the Divine subdomain and channels negative energy, primarily as defense against predators. However, once the creature gets a taste of other divine energies by bonding with items, it changes up its domain access and may decide to channel positive energy. The dragon likes to bond with multiple different items and will sometimes change bonds in the middle of a battle involving characters of opposing faiths.

A spellcaster can choose a deific kaida as a familiar. The spellcaster must be at least caster level 4th, have the Improved Familiar feat, be able to use a domain power or channel energy, and provide a holy symbol or her deity's favored weapon with which the kaida can bond.

Permeated Symbol
Aura moderate evocation; CL 7th
Slot neck; Price 14,100 gp; Weight 1 lb.
Description
A deity's power suffuses this masterwork holy (or unholy) symbol. When the wearer of this symbol channels energy, the DC to resist the channeled energy increases by 2. Additionally, the wearer can select an additional domain from which he can gain domain spells, and he gains the domain power available to first level characters for the selected domain. The selected domain must be one that the wearer's deity offers (or, for those characters not devoted to a particular deity, must conceptually fit with the character's other domain[s]).
Construction
Requirements Craft Wondrous Item, imbue with spell ability, creator must have access to domain spells or powers; Cost 7,100 gp