For today's Tomeful Tuesday, I'm finishing part II of the post on chapter 8 ( part I from a couple of weeks back) in Gary Gygax's Role-Playing Mastery (1987). 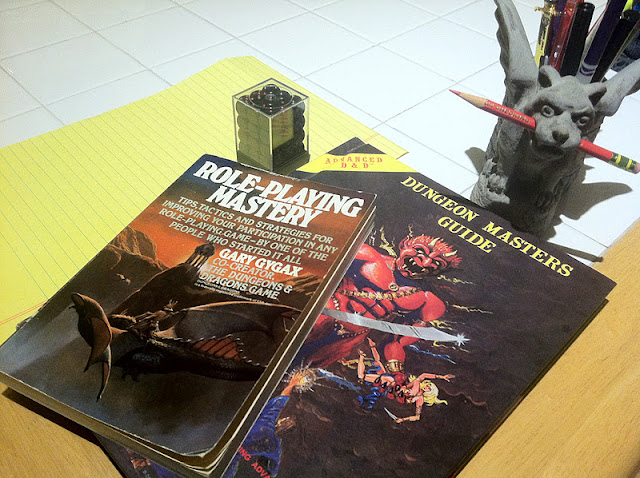 Non-player character generation
While observing that NPC generation will basically follow PC generation, he notes the need for shortcuts or pre-made parcels of information to keep the GM from being overwhelmed.

[Other] Opponents
In other words, monsters.  Gary proclaims what we already know: one of the charms (his word) of a fantasy RPG like D&D is the plethora of monsters.

Reward system for progression
"[O]ne factor is critical: The size or value of the reward must always be tailored to the scope of the accomplishment for which the reward is given" (147).

Specifics
"When we move backward in time, forward in to imaginary time, or into a world of fantasy, we have less and less hard information to draw upon... Thus, the further removed from reality the RPG is, the larger must be the information base that provides the GM and players with specifics of unknown or unreal weapons and powers" (148).  "A well-designed RPG will include a lot of specific information, so that various campaigns utilizing the same set of rules will have much in common..., and to avoid the unpleasant situations that occur when a GM is forced to do game-design work in addition to campaign design work" (149).


The Do-It-Yourself Ethos
"Modify the advice given here according to your tastes" (149).

Vancian Advocate
On pages 149-150, there is a passage related to Gary's famous opposition to the use of spell points in AD&D.


Finally, one of the most interesting passages in this section of the chapter to me is this observation on the state of D&D rules in Gary's mind circa 1987 (or, arguably, 1986):


Now [sic: New] ground is no longer being broken in the D&D game rules; they are as complete and as comprehenisve as they need to be (151).

This brings us to the end of the larger chapters of RPM.  The two final chapters (9 & 10) are short.  Thanks for checking in for this installment of Tomeful Tuesday.
Posted by Theodric the Obscure at 6:30 AM