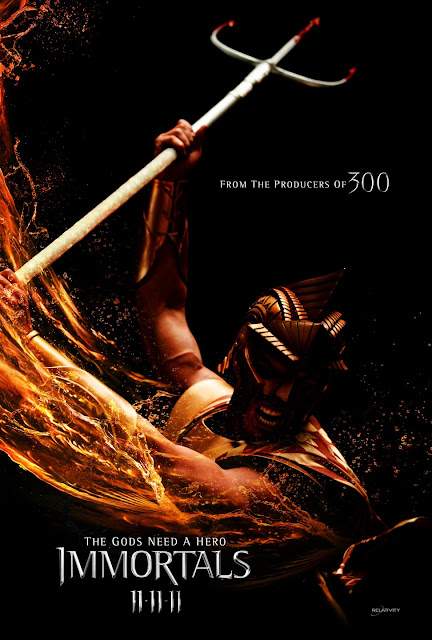 I saw Immortals last night with my stepson and my opposite-taste-continuum wife, and we all liked Immortals, so that bodes well for its reception by a general audience.  The main thing I can see going against it in this context is violence, and since I think most people these days seem to be pretty comfortable with their blood-thirsty side, I doubt that will hold it back.  If human-on-human violence bothers you, then I bet you'd already know not to go see Immortals, anyway.  I may come back to the issue of violence, but let me also note that if 300's thin storyline bothered you, there's a little more to 300.

Now for the grousing.  The premise and the plot are still pretty thin in some places.  Why are the Heraklions such jerks?  Why do they want to follow a psychopath to wipe out the Hellenes?  Why would they put up with the stuff Hyperion does to them?  Who made him the boss of us?!

My wife couldn't understand the grousing.  Here I was having seen the kind of movie that I like, it was a good movie, and she was there with me and actually enjoyed it.  Beyond some complaints about story-telling, I think it is all goes back to our current zeitgeist, which prefers radical reinterpretations that have little to no relationship to traditional material beyond a bare minimum. I understand the desire to put your own spin on old material, and this become more important when material has gotten tired and overly familiar, but when it comes to anything demanding Classical knowledge, folks today are hyper-ignorant.  When you look a the picture of Poseidon from the movie above, you know (or guess) it is him from the trident (and this puts you in the top percentile of the population in terms of classical knowledge).  However, I chose to use the only Greek god in the entire film that is indicated by traditional symbology: Zeus has a fiery whip, Athena has either curved daggers or those Japanese one-handed scythes (I know, I'm not in the mood to look up the real name), Ares has a war hammer.  What the Tartarus?  Meanwhile {¡SPOILER ALERT!} the famous Greek hero Theseus, second only to Hercules, has one adventure and then dies?  {Here endeth the spoiler.}  Pffft.  I counter that the contemporary audience is so classics-poor that most of it will seem new to them anyway.  Reinterpretation should happen for reasons, not just for postmodern masturbatory buzz.  The radicalness of it in Immortals and cases like it goes beyond any real reason.  Why not just make up an original fantasy story?  It will be impossible to keep out some points of classical inspiration, anyway.

In addition to complaints about discontinuity with the source material for no particular reason, there is the extremities of its portrayal of combat.  Now, I know complaints about realism are going to be met with rejoinders about cinema and the style of this certain film, which is fair enough, but I still have some issues here.  I note that on the whole, we are moving to grander and grander spectacle with less realism, and my own counter-current desire for an increase in realism.  Sure, I want to be entertained and blown away, but I have two concerns: eroding our ability to visually and mentally detect the realistic and the threatening of suspension of belief for those of us who retain some measure of verisimil-detection.  Do I hope in vain that we would see more films that strike this balance a bit more satisfactorily?  Or is the zeitgeist so strong in the other direction?  I guess the one glaring example is when outnumbered idiots give up the advantage of standing spread out in the open to fight huge numbers constricted by a narrow tunnel.  No amount of style can excuse that for me.  (Hey, didn't you guys make 300?  What was the tactical point of that film again?)

Some of the blends are interesting.  Christian ideas and Byzantine iconography influence this recasting of Greek myth, which has a certain honesty about it, since Christianity has forever changed the way we think about divine matters.  And I loved that fact that they actually used Greek in the movie, and didn't use a pretend Germanic pronunciation of Greek.  But what alphabet is that used throughout the film?  Certainly not Greek.  Was it designed to look cool?  Why not just invent a new Greek script instead of what is obviously a modern typeface?  And using rebar in the film?  Surely that was another look choice and not a cost-cutting measure, but will people really not recognize rebar?  That with the architectural demands the sets would put on an ancient culture, I found myself fantasizing that this was a post-catastrophic Earth of the future that was replaying religious and mythological scripts of the past.

When it comes to ultimate questions, this movie reminded me more of the Clash of the Titans remake than of 300.  And here is where the real post-Christian nature of the film is evident: Exploration of the idea that the divine needs us. From my theological perspective, this is the ultimate in self-flattery from and for folks who have a terrible crisis in identity and worth.  Is the idea that the divine loves us and doesn't need us at all in any inherent way just way beyond the popular capacity to entertain?

To close, I turn to the miscellaneous: Freida Pinto is drop dead gorgeous.  I demand that she play the iconic oracle in any future Pathfinder film.  Mikey Rourke, I don't know if it is you or Hyperion or both equally, but it is hard not to enjoy seeing you beat up.  For pleasures of grand spectacle, genre, and venal indulgence, I recommend Immortals.  It's enough that these days I'm getting some of the kind of movies that I enjoy made and made well, even if they give me a lot to complain about.  And if anybody can find me more information on that typeface/alphabet used in the film, I would really appreciate it.  Yeah, sometimes I go for the eye-candy, too, Phaedra.

EDITED: For clarity.
Posted by Theodric the Obscure at 11:37 AM