Thoughts on the Demonic from Halloween Reading 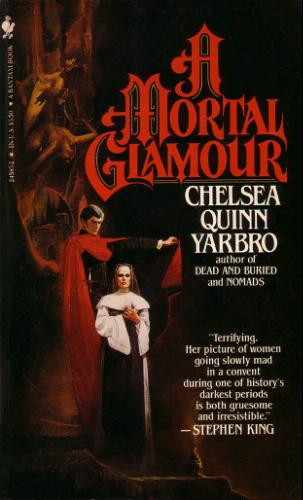 Well, I didn't finish the October reading schedule I set for myself.  I made it through book three before the month ended, due to general busy-ness.  I think I will save the other books for next October, rather than extend the reading into this month.  The last book I finished was A Mortal Glamour by Chelsea Quinn Yabro.  Set in a Southern France during the papal schism between Avignon and Rome.  It had a rather glowing blurb from Stephen King.  I'm not going to give it any prizes, but it did end up being something I didn't expect: an exploration of the idea that demons are powerless apart from human desires.  This is an interesting idea for various reasons I will explore.

I caught Stephen King on AMC last night, talking about horror movies.  One thing he touched on was his strong disagreement with Stanley Kubrick about one of my favorite horror movies, The Shining.  For King, the ghosts tied to the hotel was the problem.  For Kubrick, the character flaws of Jack Nicholson's character caused him to be haunted: he was the problem.  Kubrick believed ghost stories are ultimately optimistic, to which King objected that ghosts reflected a belief in Hell.  This calls to mind FrDave's recent post, and a conversation I had over coffee with a friend of mine who is an episcopal priest.  I had recently seen Drag Me to Hell, and was more excited about it than I had thought I would be.  For one thing, it is loosely based on a ghost story by M. R. James, "Casting the Runes" (also the basis of The Night of the Demon).  My friend objected that modern demon movies play into a theology popular in the US, that the demonic is a supernatural reality on a par with the divine: a kind of gnostic dualism in which humans are subject to demons despite God, and apart from their own morality and their own relationship to God.  I think this may go to the heart of what FrDave and King were also concerned about: one with theology, the other with what makes horror stories work.  If humans who do not deserve demonic persecution are subject to it, then we live in an world in which God fails to protect his own.  But if we live in a world where only those who deserve demons get them, then most of us (rightly are wrongly) are not scared.  {SPOILER} Who can watch Drag Me to Hell and believe that the protagonist, for all that she has some character flaws, deserves to be dragged to Hell?  If anyone deserves to be dragged to Hell, is it not the gypsy who curses her?

Surprisingly, this is where A Mortal Glamour, a not particularly sophisticated novel, steps in.  It plays on the power of desire, which has a long history of daemonic identification.  Questions of justice aside for a moment, what about our competing desires?  While we desire the good, we also have other desires that conflict with that.  What if we desired to be overcome?  Demons feeding on our desire (in Yabro's book, set in a convent, these center almost exclusively on the sexual) would have the strength to overcome our desire from the good and drag us to Hell.  There is a possibility for justice here: we get what we secretly desire.  At the same time, there is something to be afraid of.  While the initial focus of our fears is external -- the devil who can assume a pleasing shape -- we ourselves are what we should fear.  Our own conflicted, desire-ridden nature, full of secrets not only that others do not see but that we ourselves may be blind to, may be the true cause of our destruction.  There is a psychological sophistication here that I didn't expect and that I will give some thought, and from an author that I am pretty sure is very antagonistic to Christianity there is a theological anthropology that would fit with certain Christian visions.  Not that it will satisfy theological questions proper by itself, but it makes room for both fear and the optimistic view that there may be some basic justice in the story world.

Thanks for dropping by for this week's Tomeful Tuesday.  I will continue with part II of Gygax on Game Design.
Posted by Theodric the Obscure at 10:35 AM