Welcome back for the next to last October monster! The nameless naga is not quite at the Great Old One level, but it is a wonderful associate for one. It also doesn't mind consuming PCs' minds or reducing their bodies to piles of goo. If the nagas are feeling especially cooperative, they might be able to open a gate to call forth a primordial deity. Fun!

There's one more monster to go this month, and I'm looking forward to unveiling it tomorrow! 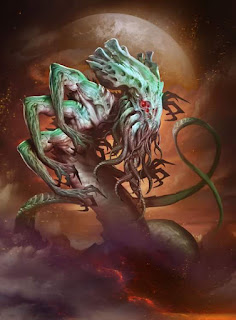 Nameless nagas sprung from naga covens who heeded the strange call to travel to dimensions beyond mortal reckoning and came back from the journey…changed. Their altered minds gave them greater command over arcane power and their bodies mutated to make them fearsome adversaries. They have also undertaken a mission to open their world up to the dark gods from beyond and extract information about ancient rituals from their victims to that end. As nihilistic agents of their new lords, they care little about the state of the creatures they encounter and leave gibbering, fearful wrecks in their wake.

Unlike many other nagas, nameless nagas work well together and form covens to better enact their plans. A nameless naga coven works similarly to a hag coven, but only has access to gate, interplanetary teleport[UM], mass suffocation[APG] (DC 31), and weird (DC 31). When all three nagas are within 20 feet of one another, they increase their spell resistance by 5, the save DCs for their spells increase by 2, and their regeneration changes to fast healing. A nameless naga coven can convert a different type of naga into a nameless naga during a two-day-long winter solstice ritual. This new naga must find or form its own coven.