Today's "F" entry for Frightful Fridays! comes courtesy of Patrick. I fancied the idea of a neutral, incorporeal outsider that uses its powers on behalf of its deity to protect threatened animals or take revenge on those who commit wholesale slaughter of animals. Along with this, I've added a spell that druids and rangers can use to emulate a cleric's planar ally spell and call one of these creatures.

That's it for this week. I'll be back on Monday with the letter "G". In the meantime, Flash will have a new shield, so you should enjoy uninterrupted coverage throughout the month. As always, thanks for reading! 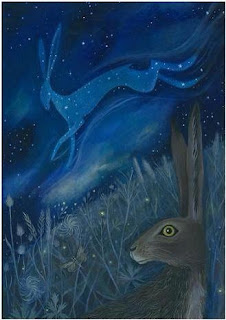 A ghostly rabbit descends upon the grass and brings an apparent sense of peace to all the animals nearby.

Special Abilities
Animal Speech (Su) A field phantasm cannot speak normally, but a character who casts speak with animals can converse with the creature. As an intelligent creature, a field phantasm can be influenced by Diplomacy, but only after someone casts speak with animals. Additionally, the creature may speak with and understand any animal.
Impart Trick (Su) Once per round, as a full-round action, a field phantasm can speak with an animal it has made at least Friendly (using its Handle Animal skill in place of Diplomacy) and grant the use of a trick to that animal. The animal retains the trick for 5 minutes, but it can only gain one trick from this ability.
Rust (Ex) A field phantasm’s incorporeal touch corrodes any metal object it contacts. The creature can target an attended object rather than a foe with its touch attack; however, if it strikes a foe wearing metal armor, it also affects the armor. The touched object takes half its maximum hit points in damage and gains the broken condition. A second successful touch destroys the item. Against creatures made of metal, a field phantasm’s touch attack deals 5d8 points of damage. An attended object, magic object or metal creature negates this effect with a successful DC 16 Reflex save. The save DC is Charisma-based.

A field phantasm acts as an emissary from a deity concerned with nature, and it usually appears when the deity wishes to protect a species from destruction or in retaliation for a particularly vile despoilment of nature. The creature has an array of abilities that allow it to influence or summon animals to attack its targets, and it can directly harm foes or their metal items. Strange “uprisings” of normally docile animals can sometimes be attributed to a field phantasm that has trained the animals to attack.

While a deity normally decides to send a field phantasm to enforce its will, a druid or ranger can call upon the creature’s aid, but this requires the character to repay the deity in some way for the favor.

This spell works like lesser planar ally, but it only summons a neutral outsider (like a field phantasm). Additionally, the offerings and payment must be composed of manufactured items worth at least half the total gp value; these items are destroyed when the creature accepts payment.