Frightful Fridays! A-Z! is nearing the end of its third week in the A-Z challenge, and today's monster resulted from some off-the-wall conversation among friends. Patrick turned up this mock SyFy monster and Paris posited the idea of making it fire-based and coined the name "pyranhaconda." This may have been the monster that convinced me to do the A-Z challenge--since I had something for "P" surely I could come up with the other 25. Then Patrick came up with the first monster in the series, the aerolion, so I was set.

I mentioned earlier that I didn't want to add a monster that would dilute the main feature monster, but the idea of salamander pyranhaconda wranglers got stuck in my head. So today's extra features a fully-statted salamander ranger with the special ability to take one of these fiery snake creatures as a companion.

I'll be back tomorrow for my normal slot here on Mythopoeic Rambling with monster "Q." See you then! 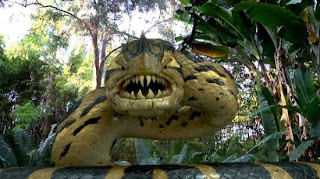 This unwholesome combination of constrictor snake and piranha radiates heat and flicks a fiery tongue between wicked teeth.

Ecology
Environment Plane of Fire or active volcanoes
Organization solitary or pair
Treasure standard (gems, jewels and other items that can withstand fire)

Special Abilities
Hardness (Ex) While on the Material Plane, a pyranhaconda gains a stony shell that grants the creature hardness 5. Breaking the shell requires a DC 24 Strength check and subjects the character to the pyranhaconda’s burn ability. A pyranhaconda loses this ability when it is on the Plane of Fire.
Vicious Bite (Ex) As a full-round action, a pyranhaconda can make 2 bite attacks against one target at its full attack bonus. The attack only deals 2d6 points of fire damage, and the pyranhaconda makes a single grab attempt.

Terrible predators on the Plane of Fire, a pyranhaconda becomes a comparative nightmare when it emerges on the Material Plane. It brings an array of death-dealing attacks with it and will find a way to dispatch its prey, whether by biting, burning or crushing the life out of it. Relatively weightless on the Plane of Fire, a pyranhaconda’s magmatic exterior reverts to stone on the Material Plane, giving the creature a weight of 800 pounds. A pyranhaconda measures 10 feet in length.

A pyranhaconda is a native to the Plane of Fire and even most denizens of that plane give the creature a wide berth. However, certain powerful salamanders have been able to establish a rapport with the creature and have a measure of control over it. These pyranhaconda wranglers bring their companions with them when they travel to other planes to launch attacks on unsuspecting communities.

A pyranhaconda, by its very aggressive nature, do not typically live to its natural lifespan of 50 years. However, if one of these creatures somehow survives to old age, it actually becomes much larger and more powerful, so the rarity of aged pyranhacondas is a blessing.