Happy Saturday to you, and welcome back to Frightful Fridays! A-Z! Theodric found this monster, and posed the question of whether this was a monster or some sort of armor. That spurred some thought, and I decided that perhaps the elf wasn't actually wearing the xenomorphs, but was instead a single metamorphic xenomorph impersonating the elf. The illustration depicts what the poor victim sees before the creature kills him.

The extra comes from a weapon that the xenomorphic infiltrators' accidental creators, the yih (from the soon-to-be-released Sailing the Starlit Sea), developed to defeat the creatures, but a GM should be able to introduce it to a campaign with a different origin.

Have a great weekend, but be sure to come back tomorrow for Flash's new shields. He's wrapping up his shield wall series with a massive finale. I'll be back on Monday for the penultimate monster in the series. Thanks for reading! 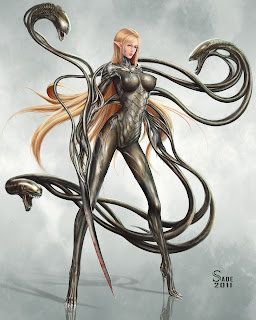 The elf’s body seemingly dissolves into an inky mass from which three fanged, acid-dripping maws emerge.

A xenomorphic infiltrator sometimes serves as a vanguard for an invasion force and sometimes comprises the entirety of an invasion force, depending on its leaders’ needs. While the creature cannot duplicate a specific person, it excels at integrating itself into almost any society and is adept at uncovering a way to immediately prove itself invaluable to that society. Sometimes the infiltrator has to manufacture a need by slaying a vital contributor in an “animal attack” or some other staged event that will not point back to the creature. In its normal form, a xenomorphic infiltrator is a roughly 5-foot-diameter sphere and weighs 180 pounds.

Originally created by yih scientists as an organic, adaptable spacesuit for yih travelers, a batch of suits that eventually became the first xenomorphic infiltrators achieved sentience and killed their wearers. The creatures found themselves suited to space and voyaged to other planets where they could indulge their murderous impulses. As the creatures’ population swelled, the original handful established a base on a hostile planet from which they direct the infiltrators’ missions. The yih, for their part, scrapped the spacesuit design and developed sonic weaponry to combat their wayward creations.

A typical xenomorphic infiltrator can survive for over 500 years before its body dissolves into a puddle of tarry goo. The creature reproduces by leaving a portion of itself in its victim’s digested corpse; a juvenile infiltrator spawns after a 6-month gestation, and the creature reaches full size a year after that.

Sonic Cannon
Aura moderate evocation; CL 7th
Slot none; Price 42,000 gp; Weight 8 lbs.
Description
This short-range, yih-developed weapon is a heavy, silver metal tube, containing a rubbery diaphragm within, and an attached grip. It fires a bubble of sound that can go no further than 30 feet. The bubble explodes in a 10-foot burst, dealing 3d6 sonic damage and inflicting 1d6 rounds of deafness to every creature in the burst (creatures vulnerable to sonic attacks, such as crystalline beings, take 6d6 sonic damage); a DC 16 Fortitude save negates the deafness and halves the damage. The cannon’s recoil bull rushes (CMB +13) the wielder, and the weapon requires 1d4 rounds to cool down before the wielder can fire it again.
Construction
Requirements Craft Magic Arms and Armor, shout; Cost 21,000 gp
Posted by Mike Welham at 6:30 AM