It's the start of a new week of Frightful Fridays! A-Z! and the halfway point too. Today's monster features a version of the badger, an animal that I have been associated with for 5 years now. I happen to like the association, and I have tried to place a badger or two in projects I've worked on, when it makes sense. This venture is no different, and this illustration uncovered by Theodric was perfect for today's entry.

Today's extra feature was a bit of a surprise to me. At first, I thought I would just highlight other [insert name here]maniacs, but I wanted to concentrate on this particular one (if you made a decent Perception roll, you will have picked up on the fact that I will have another maniac monster in a future Frightful Fridays!). The village of afflicted and formerly afflicted melesmaniacs ended up striking me out of the blue, and I grew to like the idea of an entire place populated by people who won't interact with characters out of fear of misunderstandings literally escalating beyond control.

The halfway point has put me in a bit of a reflective mood, and it is here I would like to thank Theodric for hosting this feature and getting me started with a number of illustrations. I'd also like to thank everyone who has pointed out illustrations during this feature's run (Craig, Patrick, Paris, Kirk, Rob--hopefully I'm not forgetting anyone). Finally, I wish to express my appreciation to all of you who have been reading and commenting. 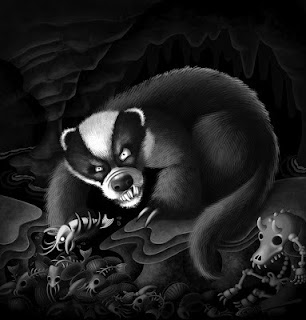 This badger is larger than average and has a murderous gleam in its eyes.

Special Abilities
Disease (Su) Melesmania: Bite—injury; save Fort DC 17; onset 1 day; frequency 1/day; effect 1d4 Wis; cure 2 consecutive saves. The save DC is Constitution-based. When a creature with 5 or more Hit Dice reaches 0 Wis, it is rendered comatose, while a creature below 5 Hit Dice transforms into a melesmaniac.
Ferocity (Ex) A melesmaniac can still perform a full round's actions and forgo its fast healing or perform a single action and still benefit from fast healing (gaining 1 hit point, rather than losing 1 hit point), when it drops below 0 hit points. If the creature drops below 0 hit points, it can attempt a DC 20 Will save; success means the creature can decide to flee.

Cures for a were-creature’s curse have met with varying degrees of success, mostly varying towards failure. Generally, the “cure” proves to be fatal for the intended recipient, but in the case of the melesmaniac, the misguided attempt has resulted in numerous deaths over the years since the creature’s genesis. A typical melesmaniac stands 2 feet tall and weighs 80 pounds, although it feels like more when it launches itself at a foe.

A melesmaniac’s origins trace back to a wizard who developed a formula to treat an infestation of werebadgers in his home city. He captured several of the afflicted creatures and, in his overconfidence, administered the formula to all the creatures at the same time. By all accounts, the formula that created the melesmaniacs died with its creator when the first creatures killed him in their rampage. These “natural” melesmaniacs could not only transmit their altered curse to humanoids, but they could also breed true. There is almost no difference between the two types of melesmaniacs other that an afflicted melesmaniac’s ability to return to its humanoid form after it reaches a state of calm, assuming it survives long enough to do so. Out of a sense of self-preservation, most melesmaniacs have learned to find a secluded location where they can retreat and attempt to survive peaceably along with normal badgers and other melesmaniacs. Although it is highly unlikely a melesmaniac will die of old age, a natural melesmaniac has a 50-year lifespan, and an afflicted melesmaniac has a lifespan matching its humanoid race’s.

An afflicted melesmaniac that has reverted back to its humanoid form needs very little provocation to transform into a melesmaniac again. If the melesmaniac takes damage, it must succeed at a Will save (DC 15 + twice damage taken) to maintain control. Likewise, an Intimidate check or a failed Bluff or Diplomacy check will cause a melesmaniac to assume its true form if it fails a DC 20 Will save.

Long-Term Melesmania
Some afflicted melesmaniacs not only survive but also find something within themselves that drives them to turn their curse to their advantage in pursuit of an adventuring life. In an odd way, the wizard’s lycanthropy cure was somewhat successful, but it requires the victim to gain experience and the perspective that comes with it. For every level gained in a player character class, the melesmaniac can attempt a DC 20 Will save to throw off the curse. Even if the character fails, he gains a +2 bonus to his Will saves to avoid losing control.

Welcome to the “Badger Village”
Melesville is a small village nestled in a deep forest. It has a reputation for being a sleepy, standoffish place whose only renown comes from the excellently trained badgers the village sells. A badger from Melesville already knows 1 trick, and its maximum learnable tricks increases by 1. A Melesville badger costs 20 gp.

Anyone who visits the village will immediately notice the preponderance of badgers within the village as well as its surroundings. The other odd sight a visitor will notice are the trees with thick ropes; a success on a DC 15 Escape Artist, Knowledge (nature) or Survival check tells a character that the ropes are fashioned as restraints for badgers, but the restraints are unusually strong. A formerly afflicted NPC greets any visitors and attempts to ensure they deal exclusively with him or her and to usher the visitors out as quickly as possible—before any violence breaks out.