Starting off week 2 of Frightful Fridays! A-Z! is the giant chalcid wasp, a find I owe to Flash. Flying, stinging insects rank third after clowns and spiders in my least-favorite-things list, so a giant-sized, evil version of this parasitic wasp seems like a great monster. In addition, this re-envisioned wasp has multiple stingers that it can shoot at characters or leave embedded in a victim, depending on how cranky the wasp feels. The stingers can bypass 10 points of hardness, so no hiding behind doors from this thing either.

I hope you'll be back for tomorrow's "H" monster. Thanks for reading! 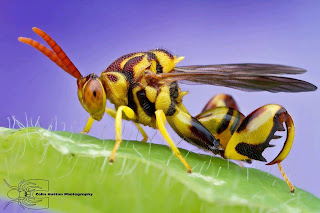 A loud droning sound precedes the appearance of this improbably large wasp with an enormous stinger that drips with venom.

Special Abilities
Array of Stingers (Ex) A giant chalcid wasp starts combat with a total of 6 stingers. It can fire a stinger as a ranged attack, or it can dislodge a stinger in a foe (which deals 1d4 points of damage per round until the opponent removes it with a DC 10 Strength check), but it reserves at least one for melee combat.
Disease (Ex) Chalcid wasp larvae: Sting; save Fort DC 18; onset 1d3 days; frequency 1 day; effect 1de Con damage; cure 2 consecutive saves. The save DC is Constitution-based.
Paralysis (Ex) The first creature stung by a giant chalcid wasp must succeed at a DC 18 Fortitude save to avoid becoming paralyzed for 1d4+1 rounds.
Poison (Ex) Sting; save Fort DC 18; frequency 1/round for 8 rounds; effect 1d6 Dex damage; cure 2 consecutive saves. The save DC is Constitution-based.
Stonebreaker (Ex) A giant chalcid wasp’s stinger is extremely powerful and can bypass 10 points of an object’s hardness when the wasp stings an object.

Typical of vermin grown to massive, unimaginable size, a giant chalcid wasp becomes a much creepier, deadlier and malevolent creature than its natural counterpart. While a normal-sized chalcid wasp is a parasitical foe of spiders that become unwilling hosts for its larvae, the giant version is a terror to any creature that could potentially serve as food for its young. A giant chalcid wasp measures 7 feet in length and weighs roughly 150 pounds.

Beyond the unusual anatomy that allows a giant chalcid wasp to hold a number of destructive stingers, the wasp can employ its stingers to inject poison or to act as ovipositors. When the creature hunts for food, it only uses its poison to incapacitate its prey, either directly through paralysis or as the eventual result of its poison, allowing it to bite and sting them to death. During its annual reproductive cycle, the creature’s primary goal is to immobilize its victim and inject its eggs into the helpless, but still living, host.

Strangely, in keeping with its smaller cousin’s preferences, a giant chalcid wasp attacks gigantic spiders in preference to any other prey.

If a character succeeds at a DC 18 Craft (alchemy) or Heal check, he can extract one dose of chalcid wasp poison (injury; save Fort DC 18; frequency 1/round for 8 rounds; effect 1d6 Dex damage; cure 2 consecutive saves) from a stinger. Each dose has a price of 1,500 gp.
Posted by Mike Welham at 6:30 AM