Today's Frightful Fridays! A-Z! entry goes back to the sea. Unlike the other aquatic creatures presented here, this one might actually be helpful. It still won't have the characters' best interests at heart, though, and will use them as a means to an end--hopefully one the characters want to achieve as well. The extra feature derives from the nautilophalange's bane ability and is a spell that a character in the business of dispatching enemy creatures can use to get some additional assistance.

I'll see you again for tomorrow's "O" monster. Thanks for reading! 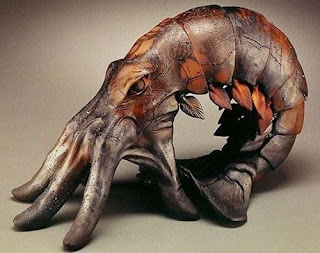 This large lobster has eyes that are decidedly unlobsterlike and, more unusually, a hand in place of its claws and antennae.

A self-appointed arbiter of the world under the surface of the oceans and seas, a nautilophalange is also a dedicated hunter of all things chaotic and aberrant. The fact that it is also an aberration does not escape the creature, but that does not deter it from carrying out its mission. A nautilophalange measures 3 feet in length and weighs 40 pounds.

Lend Bane
School transmutation; Level inquisitor 3, ranger 2
Casting Time 1 round
Components V, S
Range touch
Target creature touched
Duration 1 min./level
Saving Throw Will negates (harmless); Spell Resistance yes
By means of this spell, you impart a partial amount of your hatred for certain foes to the recipient. For the duration of the spell, the recipient gains a diminished version of your ranger’s favored enemy ability or your inquisitor’s bane ability, depending on which ability you possess; if you have both abilities, you impart both to the recipient. A recipient who gains the favored enemy ability gains half your bonuses to skill checks, attack rolls and damage rolls against your favored enemies. The granted bane ability can be used for a number of rounds equal to half your inquisitor level, and the rounds need not be consecutive.
Only one target at a time can benefit from this spell; if you cast it again, you dismiss the previous casting.