Welcome back to Frightful Fridays! A-Z! Today's monster was sent to me by Patrick and is the first fey creature for this feature. Admittedly, the obscurite comes very close to being an undead creature and shares a few abilities with undead. I liked the idea of leaving it as a fey creature, since it seemed uniquely suited to fey. Today's extra, the crystallized memory wondrous item, ties fairly directly to the obscurite, and can be used as a MacGuffin for characters who might not be able to easily handle an obscurite.

I hope you enjoy the obscurite and I'll see you here again for tomorrow's monster! 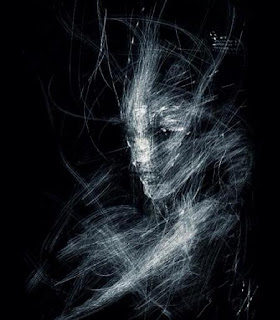 The barely visible form of this fey creature reaches out, seemingly desperate to cling to anyone within reach.

Special Abilities
Create Spawn (Ex) When a creature reduced to 0 Charisma through an obscurite’s ego drain dies, the obscurite offers to restore the character to life. If the character fails a DC 24 Will save, he accepts the offer and returns as an obscurite in 24 hours. The save DC is Charisma-based. This new creature is not under the control of the obscurite that created it.
Ego Drain (Ex) An opponent struck by an obscurite takes 1d6 points of Charisma drain. While the victim has drained Charisma, it does not benefit from skill ranks on any Charisma-based skill checks. If the victim reaches 0 Charisma, all other characters who know the victim must succeed at a DC 24 Will save or utterly forget about the dead character. The save DC is Charisma-based.

When most living mortal creatures fall through society’s cracks and wind up forgotten by even former friends and family, it is a sad event that by its nature goes unmemorialized. This is not the case with living fey, who through similarly unfortunate circumstances end up disremembered and undergo a strange metamorphosis as a result. A creature known as an obscurite springs from this transformation, and it seeks to restore awareness of itself essentially by stealing it from others.

Though not undead, an obscurite shares attributes with many of those malevolent creatures that thrive after death. The creature’s physical body fades away, leaving behind its mere visage, and it steals its victims’ essences with a mere touch. If it kills a victim, it can create another obscurite from the victim’s corpse, while potentially erasing all memory of the unfortunate soul. Ironically, this does nothing to alleviate the original obscurite’s condition.

Fortunately for the world at large, an obscurite usually haunts the fey settlement where it formerly lived. Once an obscurite forms, though, it does not take the creature long to wreak havoc on its former society as its cries for others to remember it go unanswered. For this reason, many fey nobles have shared the secrets of creating crystallized memories among themselves (and reluctantly with outsiders). If something can present an obscurite with an external memory of itself, the creature will either fade utterly into oblivion or return restored to its physical form.

Crystallized Memory
Aura moderate conjuration; CL 9th
Slot none; Price 40,000 gp
Description
This clear crystal shard holds the memories and experiences of its owner. When the owner takes damage or drain to one of his mental attributes, he can grasp the crystal to restore those attributes to full. However, for 12 hours after regaining his attributes, he is treated as if had a negative level as his psyche reintegrates old memories; when this time elapses the negative level is restored. Additionally, the crystal goes inert for a week after returning the owner’s memories and cannot be used again until the week passes. In order for the crystal to retain its effectiveness, the owner must spend one hour per month sharing his memories with the item.
As another useful ability granted by a crystallized memory, the owner can recall a fact that he may have forgotten, effectively allowing the character to take 20 on a Knowledge check. The owner can only invoke this ability once per week.
Construction
Requirements Craft Wondrous Item, telepathic bond; Cost 20,000 gp
Posted by Mike Welham at 6:30 AM