Frightful Fridays! A-Z! lands temporarily on its normal day for today's krakenwight. Another in a decent set of aquatic creatures, this one helps to "flesh out" the dread kraken's overall place as self-styled ruler below the waves. It's much more of a manageable challenge for characters, though.

Today's extra feature is something that probably won't see use by player characters (except for evil campaigns, or the occasional character who chooses to channel negative energy), but sometimes monsters like to have toys for themselves. I hope it provides a not-so-nice surprise to characters facing off against undead creatures.

I'll be back tomorrow for the final Frightful Fridays! post of this week. See you then. 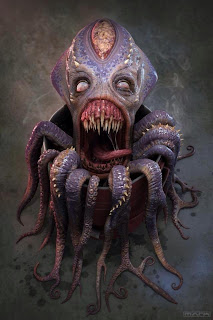 This human-sized octopus has a maw filled with rotting teeth and eight sickly looking tentacles.

Special Abilities
Energy Drain (Su) When a krakenwight drains energy from a foe, it gains 5 temporary hit points for each level drained.
Ink Cloud (Ex) A krakenwight can exude a 20-foot-radius sphere of carrion-tainted ink once per minute as a free action. The ink provides total concealment in water, and persists for 1 minute. Any character caught within the cloud must succeed at a DC 23 Fortitude save to avoid becoming sickened for 5 rounds. The save DC is Charisma-based.

A krakenwight serves as a lieutenant for the dread kraken that converted it into the kraken’s own foul image. The krakenwight remembers the painful transformation from the remains of the former humanoid creature that met its demise at the dread kraken’s tentacles. This serves to cultivate cruelty in the krakenwight and to remind the creature of its new master’s power. A dread kraken is roughly the same size as a typical human, but its tentacles can stretch to reach much further than a human’s limbs are capable, and it weighs roughly 400 pounds.

A krakenwight is a consummate bully to its subordinates and continually jockeys for the dread kraken’s favor at the expense of fellow krakenwights. For those aberrations that serve a krakenwight, they can expect a fair amount of abuse at their lieutenant’s tentacles for the slightest mistake. A krakenwight equipped with a circlet of negative energy conversion delights in inflicting wounds on its underlings, since it finds its energy drain renders them less useful than physical pain does.

Oftentimes, an autonomous krakenwight remains allied to its former dread kraken master, primarily out of fear that the dread kraken or its minions, who vastly outnumber independent krakenwights, will destroy the wight if it acts against its former master. A newly freed krakenwight will serve a new leader, if that creature is demonstrably more powerful.

Circlet of Negative Energy Conversion
Aura moderate necromancy; CL 11th
Slot head; Price 13,200 gp; Weight 1 lb.
Description
Three times per day, as a free action, the wearer of this rusted crown can exchange the ability to inflict energy or ability drain for negative energy damage or vice versa. If the wearer gives up the ability to inflict drain for 2 rounds, it can deal 2d6 + 10 points (plus 2d6 if the creature can inflict more than 1 level or 1 die of ability drain) of negative energy damage to every creature within a 50-foot radius of the wearer (Will save DC equals 16 + wearer’s Charisma modifier). The negative energy also heals undead creatures, including the wearer if applicable.
If the wearer forgoes the ability to channel energy for 2 rounds, it can inflict 1 negative level or 1d6 Strength damage per 5 dice of channel energy with a touch attack until the beginning of its next turn. If not restored, negative levels and Strength damage caused by the circlet persist for 12 hours.
Construction
Requirements Craft Wondrous Item, enervation, mass inflict moderate wounds, ray of enfeeblement, creator must be able to channel negative energy; Cost 6,600 gp
Posted by Mike Welham at 6:30 AM