With five monsters left in April, this feature finally includes a new spider-related monster. Rather than a mashup with another monster, though, this one stands alone as a construct. Its modus operandi matches that of real-world spiders: wait for its unsuspecting victim to stumble upon it and poison it. This is great for the character ultimately responsible for the poisoning, but, of course, not for the poisonee. The extra for this monster allows a GM to craft slightly different versions of a venomous clockwork depending on the GM's desires.

I hope you like the venomous clockwork, and I'll be back tomorrow for Frightful Fridays! normal slot. Thanks for reading! 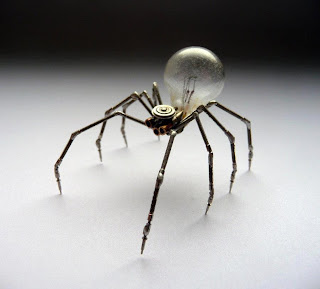 This intricate, metal spider has a clear glass abdomen filled with vile liquid.

Ecology
Environment any
Organization solitary, pair, or murder (3–6)
Treasure none

Special Abilities
Poison (Ex) Bite—injury; save Fort DC 17; frequency 1/round for 8 rounds; effect 1d6 Con damage; cure 2 saves. The save DC is Constitution-based and includes a +2 racial bonus.
Self-Destruct (Ex) When a venomous clockwork has the grappled or pinned condition for 2 rounds or is reduced to 0 or fewer hit points, it explodes in a spray of shrapnel and poison. Every creature in a 20-foot radius takes 4d6 points of piercing and slashing damage and is exposed to the clockwork's poison. A successful DC 15 Reflex save halves the damage, but the character is still exposed to poisoning. The save DC is Constitution-based.
Sophisticated Programming (Ex) Even though a venomous clockwork is not intelligent, the creature has basic programming that allows it to use Disable Device as if it were trained in the skill. Additionally, the creature has thieves’ tools built in and does not face increased DCs for opening locks.

A venomous clockwork, or clockwork assassin, is a sophisticated death-dealing construct built to enter its target’s location unnoticed and equipped to avoid many countermeasures its target may deploy. While the clockwork’s creator would prefer that the creature returned to it after a successful assassination, the construct has a self-destruct mechanism that it employs when captured or destroyed. A venomous clockwork measures 18 inches in diameter and weighs 50 pounds.

In addition to an ever-filling reservoir of poison, a venomous clockwork is equipped with tools that allow it to bypass locks and disable all but the most sophisticated traps. The clockwork’s creator or a designated agent programs the clockwork with its target’s image, and then the creature is set loose in a location the target resides or frequents. Once the creature has dispatched its target, it returns to a predetermined location. Note that the creature’s somewhat limited Perception bonus means that it easily can be fooled with a Disguise or Bluff check.

Construction
A venomous clockwork’s body is an intricate fusion of high-quality clockwork and glass worth a total of at least 1,000 gp.

Alternate Venomous Clockworks
While a venomous clockwork’s spider form is the most traditional, some creators find it impractical for their needs. The following adjustments can provide variety and allow a GM to use a type that fits the situation. Each alteration costs 500 gp plus or minus 1,000 gp times the total CR adjustment squared (a 2-CR reduction would subtract 4,000 gp from the total cost, for example). The price adjustment is double the cost adjustment. The alternate model cannot have a final CR lower than 6.

Battle-Ready (CR +1)
This venomous clockwork, rather than acting as an assassin, roves a battlefield and inflicts its deadly bite on enemy combatants. The clockwork’s natural armor bonus increases by +2, its hardness increases by 5 points, it gains 20 hit points, its speed decreases to 30 ft., the save DC for its poison increases by 2 and the damage inflicted by its self-destruct increases to 8d6. A battle-ready clockwork has no racial modifiers for Disable Device, Escape Artist or Stealth, but it gains a +2 bonus to its CMB for grapple and trip attempts and a +2 bonus to its CMD to resist grapple attempts. This clockwork has no adjustments to its Construction requirements.

Discrediting (CR +0)
This alteration allows the venomous clockwork to inject a slow-acting poison in its target that renders the target befuddled when confronted by a stressful situation within 24 hours of the poisoning. When a discrediting venomous clockwork bites a target, it attempts a Stealth check opposed by its target’s Perception check; if it succeeds, the target is unaware of the bite, which deals no damage to the target. The poison deals 1d6 Wis damage rather than Con damage, and it gives the victim the confused condition for 10 rounds after his last failed save (a spell such as neutralize poison will remove the confused condition). The construction requirements include confusion.

Disease-Carrying (CR +0)
Sometimes a venomous clockwork’s creator would prefer to blackmail or instill terror in his victim, offering a cure for a longer-lasting malady for some concession. This creature delivers filth fever with its attack; the disease requires a DC 14 Fortitude save rather than a DC 12 Fortitude save but is otherwise the same. The construction requirements replace poison with contagion.

Flying (CR +0)
This venomous clockwork loses its climb speed, but gains fly 60 ft. (good). Additionally, it replaces its Climb bonus with the same Fly bonus. Since most of these models look like stinging insects, the bite attack is usually replaced with a sting attack, but this attack is otherwise unchanged. The construction requirements replace spider climb with fly.

Incapacitating (CR –1)
Occasionally a venomous clockwork only needs to render its target unconscious for a period of time. This clockwork’s poison has the following changes: frequency 1/5 minutes for 60 minutes; effect sleep for 5 minutes. This construct has no changes to its construction requirements.

Lightweight (CR –1)
This model of venomous clockwork is more delicate but much more agile. The clockwork’s natural armor is reduced by 2, it loses its hardness, and its bite deals 1d4 points of damage. In return, the creature’s Dexterity increases by 4 points, increasing its Armor Class (effectively neutralizing the natural armor penalty), attack rolls, CMD and Dexterity-based skill checks by 2. Its speed also increases to 50 ft. This construct has no changes to its construction requirements.

Unseen (CR +2)
When a venomous clockwork’s creator can afford it and finds it necessary, he gives his creation the ability to truly hide. When the clockwork gets within 100 feet of its target, it activates greater invisibility, which lasts for 10 rounds. The construction requirements include greater invisibility.