Next up is the perhaps awkwardly named crippo. It took a little while to come up with a special ability for this one, until I hit upon the idea that the crab's constrict attack could continue beyond death (at a slight decrease, since the creature is no resisting any attempts to break free). I hope you like this tenacious beast (evidently held by a Gargantuan humanoid), and I'll be back in an hour with another monster. 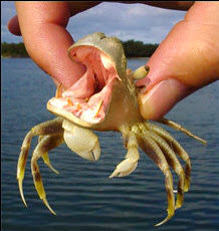 Special Abilities
Beyond Death (Ex) If a crippo dies while constricting a foe with its claw, it does not release the claw. The crippo's CMB and CMD take a –4 penalty for the purpose of maintaining the grapple.
Fierce Grip (Ex) A crippo only takes a –5 penalty to maintain a grapple with a claw if it chooses not to conduct the grapple normally.

Crippos combine the crab's aggressiveness with the hippo's tenacity, resulting in creatures that can harm opponents even after they die. Crippo creators thought they would devise something that could hold prisoners captive, but they failed to count on the creatures' exuberance in crushing captives in their claws. Many cast-off crippos now terrorize shallow water and beaches alike.

Posted with Blogsy
Posted by Mike Welham at 1:00 PM