Welcome to the Frightful Fridays! Mashup Marathon! I have received a plethora of mashup images over the past year, and I figured I would share them with you over the course of the day. I also figured I'd start off with a spider creature, since friends who know of my "love" of spiders like to throw images of them at me. I'm pretty sure I would immediately drop dead of fright if I saw something like this emerge from the water. I will try to do something beyond just mixing and matching monster stats for each of these monsters (for example, the arachnishark's poison inflicts bleed damage, representing the shark's desire to scent out bleeding prey).

I hope you like the arachnishark, and check back in an hour for the next monster in the lineup. Thanks for reading! 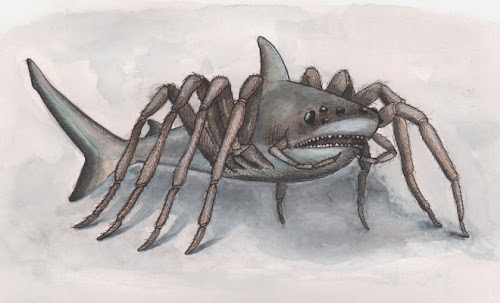 This charming creature can be found here.

Ecology
Environment any ocean or coastline
Organization solitary, pair, or school (3–12)
Treasure none

Special Abilities
Poison (Ex) Bite—injury; save Fort DC 17; frequency 1/round for 6 rounds; effect 1d4 Strength damage; effect 1 point of bleed damage (the bleed damage increases by 1 each time the victim fails the Fort save, and restarts at 1 if previous bleed damage has been healed); cure 2 consecutive saves.

Arachnisharks derive from two delightfully nightmare-inducing creatures, and the inherent nastiness of their creators carries through into their own demeanors. Despite their relative lack of intelligence, arachnisharks seem to derive pleasure from fooling unsuspecting victims who presume that being land-bound protects them from the creatures. Arachnisharks also have a deadly poison that saps their victims' strength and induces internal bleeding, which further drives the creatures' feeding frenzies.

Posted with Blogsy
Posted by Mike Welham at 12:00 AM