Welcome back to a new Frightful Fridays! after an extended absence. I left off with an image brought to me by Kajehase, and I will start anew with another image procured by him. Its hyena-like appearance inspired me to tie the runehound to gnolls, and I hope it makes for an unexpected complication for characters expecting to easily dispatch a hyena companion.
I plan to be back next week with a new monster, and I appreciate your patience during the long absence. Thanks for reading Frightful Fridays! 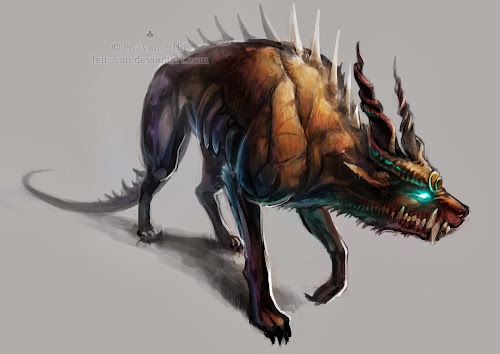 You can find the rune hound illustration here.

Ecology
Environment any desert or plains
Organization solitary, pair, or pack (3–8)
Treasure none

Special Abilities
Magic Eater (Su) If a runehound destroys a magic item with a sunder attempt, it absorbs the energy dispersed by the item's destruction. The runehound can choose to gain 5 temporary hit points per effective enhancement bonus of the item or replenish spell levels equal to 4 per item's effective enhancement bonus for its spellstrike ability.
Spellstrike (Su) A runehound can apply any 4th-level or lower magus spell with a range of "touch" or that features a ranged touch attack to its bite attack. If it uses a spell featuring a ranged touch attack that targets more than one creature (such as scorching ray), it can only target the creature it bites and loses the effects for any additional targets. The runehound cannot choose the same spell two rounds in a row, and it can only apply a total number of spell levels to its bite attacks equal to twice its Hit Dice per day.
Symbol (Su) Once per day as a full round action, a runehound can manifest a symbol with a sorcerer/wizard spell level no higher than half its Hit Dice (rounded up). The runehound must spend an amount equal to twice the symbol's spell level from its spellstrike's pool of spell levels to cast the symbol, which affects all creatures within 60 feet of the runehound (excluding itself and any creatures it designates). The symbol fades immediately after the runehound employs it.


Runehounds have an innate magical gift that makes them far more dangerous than their hyena relatives. Unlike hyenas, runehounds prefer freshly killed meat, especially that which they have "tenderized" with magical energy (fire and electricity are particular favorites). Runehounds stand 4 feet tall at the shoulder, measure 7 feet in length and weigh 200 pounds.


Runehounds do not possess great intelligence, but they are cunning creatures. A solitary runehound uses its detect magic to locate the most powerful magic weapon carried by its foes, and attacks that item's owner. It does not open with the most powerful spells with its spellstrike ability, as it gauges resistances or weaknesses to various energies and conserves its spellstrike pool in case it needs to use an incapacitating symbol to escape. A pack of runehounds attacks more recklessly, but one of the creatures withholds its spellstrike pool in case the tide of battle turns.


Runehounds' origins are unknown and open to wild speculation. Gnolls believe that powerful gnoll shamans who have curried favor with their demonic patrons (or, in some cases, angered their demonic deities) return as runehounds, merging their former magical might with the hyena's bestial nature. No one has ever sighted a young runehound, which grants an odd credence to the gnolls' theory. Gnoll tribal leaders aware of an independently roaming runehound work hard to attract the runehound to their tribes; they regard a runehound shunning them as an ill omen. Despite being ostensibly more intelligent than runehounds, gnolls defer to runehounds during hunts and allow them to destroy magic items that would otherwise benefit the gnolls.

Posted with Blogsy
Posted by Mike Welham at 9:00 AM