Welcome to a late edition of Frightful Fridays! A visiting friend and a surprise water leak caused by some faulty dryer ductwork made it a bit difficult to deliver on time this week, but I hope you'll indulge my delay. This week's monster is courtesy of an image suggested by Kristin and a request by Patrick for fun aquatic monsters. The PCs may not consider the thaumaturgic axolotl "fun" when it sets off a wand of fireballs centered on the wand's owner or when it drains a bunch of potions, but DMs might.
In Frightful Fridays!-related news, Mythopoeic Rambling got a nice shoutout in the latest episode of Know Direction (#74), in reference to the Clockodile, so thanks to Ryan Costello for the mention. Also, in tangentially related Frightful Fridays! news, a monster I submitted to Kobold Press's Monarch of the Monsters contest (the green strangler) wound up as one of the five finalists. If you haven't had a chance yet, check out all the monsters and vote for your favorite here.
I hope you like this week's monster, and I'll be back in four days with a new one. Thanks for reading! 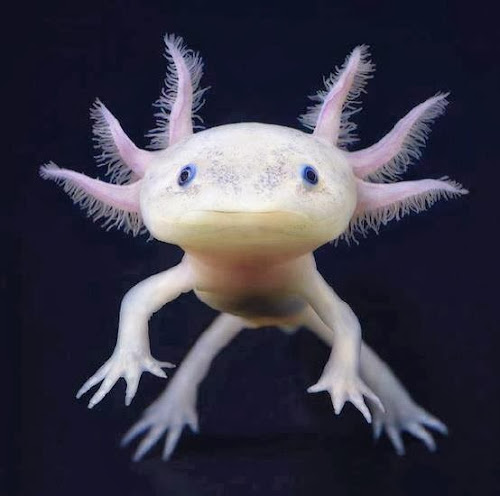 This cute guy can be found here
This pale pink salamander-like creature has several fronds jutting from its head; long, thin fingers tipped in sharp claws; and black, expressive eyes that widen in the presence of magic.

Special Abilities
Discharging Touch (Su) As an attack action, a thaumaturgic axolotl can attempt a touch attack and force one of its target's magic items to activate. This affects single-use and charged items and works only when the creature succeeds at a Use Magic Device check to activate the item. For items that target a creature, the axolotl chooses itself or the item's possessor as the target. Otherwise, the item targets an area centered on the owner.
Inert Magic (Su) A thaumaturgic axolotl renders worn magic items with a faint or moderate strength aura nonmagical while the creature possesses them. When the axolotl dies, all worn magic items regain their functionality.
Magic Savant (Ex) A thaumaturgic axolotl always treats Use Magic Device as a class skill and gains a +4 racial modifier for Use Magic Device.
Severing Curse (Su) When killed, a thaumaturgic axolotl inflicts a curse on the character who dealt the killing blow. If the character fails a DC 18 Will save, he treats all carried and worn magic items as nonmagical. Additionally, the character gains SR 16 with respect to beneficial spells. Remove curse, break enchantment, and more powerful spells end the axolotl's severing curse.

Inherently inquisitive creatures, thaumaturgic axolotls become intensely curious when they sense magic items that come within range of their detect magic. This curiosity proves dangerous to visitors to axolotls' ocean abodes, as they prematurely discharge protective items or set off offensive magic centered on the unsuspecting owner while the axolotls' spell resistance protects them from the damaging effects. Thaumaturgic axolotls, which are considerably larger than their mundane cousins, measure 4 feet in length and weigh 100 pounds.


Allegedly engineered by aboleths or dread krakens, thaumaturgic axolotls have a peculiar relationship with magic. The creatures can set off magic items held by others, but they cannot use items themselves. Many theories hold that the creators of thaumaturgic axolotls designed them to suppress magic items in order to allow the creators to study potentially harmful items or to deliver their own crafted magic items to others without drawing attention to the axolotl couriers. The axolotls bestow this suppressive "gift" to those who slay them, which strongly points to the creatures' use as anti-magic shock troops.


Whatever their origins, many thaumaturgic axolotls roam freely now and quietly indulge their curiosity when they encounter enchanted items. Typically, axolotls approach other magic-carrying creatures from hiding and attempt to discharge one of the items. If a character can establish communication with an axolotl and gain its trust, the creature asks to handle one of the character's items. The axolotl may follow the character in the hope of discovering new items. When axolotls gather together, they excitedly discuss the sensations of magic items they have tripped in their relatively short lifetimes—a typical thaumaturgic axolotl only lives for twenty years, but adventurers have run afoul of centuries-old specimens.

Posted with Blogsy
Posted by Mike Welham at 7:30 PM