The pterodactwhale is another creature that will surprise characters staying away from the water in false assurance of their safety. This mashup is considerably less aggressive than the arachnishark, so characters who do not provoke the creature should have no problem. Another creature awaits you in an hour! 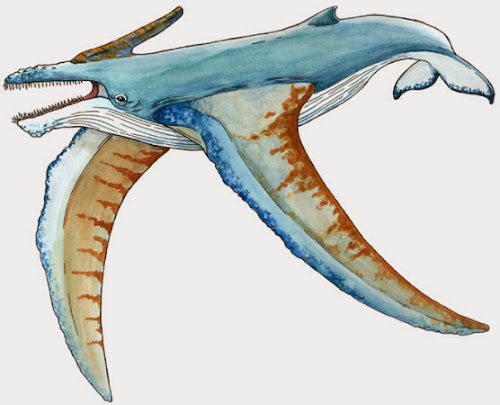 Sometimes, creators who crossbreed creatures enjoy the challenge of devising something that seems otherwise impossible in nature. Pterodactwhales are one such frightening concept, managing to barely stay aloft and landing frequently to rest. During these landings, pterodactwhales can destroy property or mash victims to a pulp. In the water, the creatures are much more graceful, and those who witness pterodactwhales leaping from the water to take short flights speak in awe of the spectacle...provided they have not been crushed by a fatigued creature. Pterodactwhales can also build their whale song to a crescendo, deafening and shattering the bones of those who hear it.

Posted with Blogsy
Posted by Mike Welham at 6:00 AM