Mantis shrimps have captured the imagination of many people in the past year, so seeing a mashup that features a mantis shrimp was no surprise. I hope I captured its ability to perceive its surroundings in an entirely different fashion to any other creature. Another mashup will make its way onto the blog in another 60 minutes! 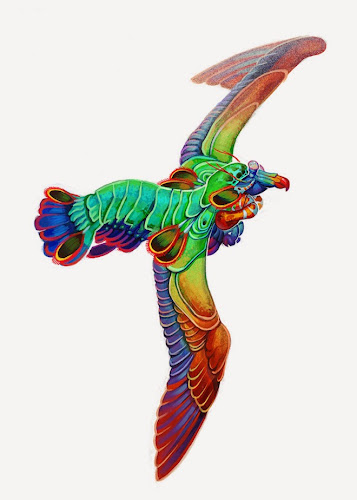 Derived from a combination of two highly aggressive creatures, the mantis shrimp and the petrel, stomatopetrels are near murderous flying beasts possessing an array of senses that render hiding from them nearly impossible. Stomatopetrels prefer to fly past their prey and attack with their mighty carapaced wings, which potentially cause their prey to become insensate, whereupon the creatures alight upon their victims and further pummel them while also attacking with their less powerful beaks.

Posted with Blogsy
Posted by Mike Welham at 5:00 AM